Paola Mendoza is busy. She’s been busy since November 2016. The morning after Donald Trump was elected president of the United States, the author, filmmaker and daughter of Colombian immigrants lied on her couch and cried; meanwhile, a Facebook post by retired Hawaiian attorney Rebecca Shook was taking off: It read, “I think we should march.”

The Women’s March was in the works, and Mendoza got in on the ground floor, shaping what would become the largest protest in world history.

As the date of the march — Jan. 21, 2017, the day after President Trump’s inauguration — approached, organizers put forth a series of unity principles. Mendoza characterizes them as “extremely progressive, extremely radical” — stances that stood in stark contrast to Trump-endorsed policies, and went far beyond archetypal “women’s rights” causes. Yet the Women’s March was embraced by the mainstream. Part of Mendoza’s job, and the hundreds of artists she helped rally around the event, was to use visual art, poems, songs, videos and social media to communicate these intersectional issues in the most impactful way possible. In the week leading up to Christmas, the Women’s March organizers were working 15-hour days.

When Jan. 21, 2017 rolled around, half a million women and men marched on Washington, D.C., and an estimated 4.5 million more participated in 673 sister marches across 81 different countries (Iowa held three: in Des Moines, Iowa City and Dubuque). Photos and reflections from that day and the surrounding months are recorded in the book Together We Rise, to which Mendoza contributed. The tour for that book will bring her to Iowa City on April 27 for the Flyover Fest.

“The Women’s March kind of blew open the door in a moment in time when this country felt broken and helpless,” Mendoza told Little Village in a phone call from the streets of New York City. “The five million people that went out and marched that day, they said ‘we’re not broken. We’re not lost. We’re united, we’re organized, we feel hopeful and we have power.’ And in our darkest moment, the people were able to say that to one another, and what we’ve seen in the past year and a half is the ramifications of that.”

For Mendoza, that day divided U.S. cultural history into three epochs: before, during and after the Women’s March. Today, in the land of “after,” Mendoza’s art and activism has stretched from the Grammy Awards to New York Fashion Week to the star-studded People’s State of the Union.

Before Jan. 21, 2017, there were women’s rights marches, LGBTQ marches, marches for immigrant rights, marches for disability awareness. The Women’s March, headed by women of color, was determined to be anything and everything. Intersectional. And that caused a bit of a stir.

The term “intersectionality” was coined in 1987 by scholar and civil rights advocate Kimberlé Williams Crenshaw. The idea was that different identities — based on race, ethnicity, class, gender, sexual orientation, physical ability, etc. — are not mutually exclusive. A strong social movement, then, works to secure justice for all marginalized populations and acknowledges the ways they intertwine.

In recent history, white feminists have focused a majority of their resources on reproductive justice and pay equality — important topics, Mendoza said, but not the only issues threatened by the Trump administration.

“White feminism cannot be the center of the women’s movement anymore. It has to be inclusive, truly inclusive, of women of color,” she continued. “When we first introduced intersectionality, folks were really confused by it and really disappointed by it in many ways. They didn’t understand how it worked … but I think that conversation was one of the biggest successes that [the Women’s March] had.”

This inclusive agenda was reflected in the art Mendoza helped to curate as artistic director of the Women’s March. She teamed up with the Amplifier Foundation to solicit work by women and non-binary artists across the country, which would become downloadable and distributable posters. Of the five selected images, narrowed down from 5,000 submissions, all depict or represent non-white women.

One reads “Respeta mi existencia o espera resistencia” — Spanish for “respect my existence or expect resistance.” Over the message “Hear our voice,” another shows three hands of different skin tones grasping a black arm, the fist raised under a flame and a dove. A black child with a head full of natural hair holds center in a third, under the message “Women are perfect.”

“I think art is essential to any sort of movement,” Mendoza said. “I use the Women’s March as the perfect example of what artists were able to do, with hundreds of thousands of artists all across the country that were creating art inspired by our unity principles. If [art] is working well, you’re able to see a shift in perception and ideas, in desire and, ultimately, in policy.”

Mendoza discussed activist art with Harry Belefonte shortly after the Women’s March. Belefonte was an honorary co-chair of the march (along with Gloria Steinem), and let organizers use his New York office as a headquarters. They reflected on the shortage of modern protest music compared to the civil rights movement. Belefonte said something that stuck with Mendoza: “When the movement is strong, the music is strong.”

“We know that the movement is strong — the last year and a half has been evidence of that,” Mendoza said, “but we wanted to make sure the music is strong.”

With Sarah Sophia Flicker and Ginny Suss, Mendoza founded the Resistance Revival Chorus last June. The call for vocalists was answered quickly, and the group of more than 50 women has been performing tributes to protest music old and new, across the country. Less than a year after forming, they’ve released their first single — a cover of Leslie Gore’s “You Don’t Own Me” — and taken the stage at the Grammy Awards, backing up Kesha in her performance of the Me Too/Time’s Up anthem “Praying.” They will accompany Philip Glass at Carnegie Hall on March 3.

On the human side, Mendoza has plenty of experience. She says she’s interviewed thousands of undocumented immigrants in the past eight years and used their stories to fuel her creative and political pursuits.

“There’s nothing more empowering and impactful for me than to hear people’s stories, and at times I’ve been able to take those stories and translate them for others to hear. That has been one of my greatest honors, that people have entrusted me with so much private pain and heartache. It’s been extraordinarily humbling in many respects.”

Some of these stories influenced Mendoza’s first novel, The Ones Who Don’t Stay (2013), about a mother and daughter who move from war-torn Colombia to L.A. While she’s directed and acted in scripted films, she said writing a fictional story was challenging. It was also deeply personal, drawing heavily from her grandmother’s, mother’s and her own story.

Mendoza was three years old when she and her brother were brought to the U.S.

“A few months after we arrived, my father abandoned us and left my mom with nothing but two kids, no English, no family, no house, no money. She had like $200 in her pocket and no high school education, and my mom was able to do what so many immigrants have done before her, which is really make magic out of nothing and put her dreams aside for the dreams and aspirations and the hope of her children,” Mendoza said.

“She was able to fight through homelessness, fight through public housing to eventually get a job at a fast food restaurant, put herself through school and get her children through college and their masters degrees, and that’s really the inspiration and reason I am in this fight as an ally of undocumented immigrants today. I am not undocumented and I was never undocumented, but I think it’s important to show up for issues that aren’t just our own.”

This, Mendoza said, is the foundation of intersectionality, and what the Women’s March will be remembered for in 20 years: a cultural wave that put women of all backgrounds at the center of the national conversation.

“Now we’re seeing intersectionality play out all across the board on various issues,” Mendoza observed. “We’re seeing Planned Parenthood stand up for Dreamers, and we’re seeing Indivisibles stand up for reproductive rights and environmental justice. We’ve seen it just recently with the kids down in Florida: So many young women are the lead organizers of that moment. All of those things are connected to this very radical cultural shift that happened in 10 weeks and beyond with the Women’s March.”

A year and another march later, Women’s March organizers — now leaders of a global Women’s March organization — are conscious of protecting that legacy. Together We Rise: Behind the Scenes at the Protest Heard Around the World serves as a time capsule, featuring 320 pages of photos and stories from Jan. 21, 2017, as well as the weeks before and after. Proceeds from the book sales benefit The Gathering for Justice, SisterSong Women of Color Reproductive Justice Collective and Indigenous Women Rise. 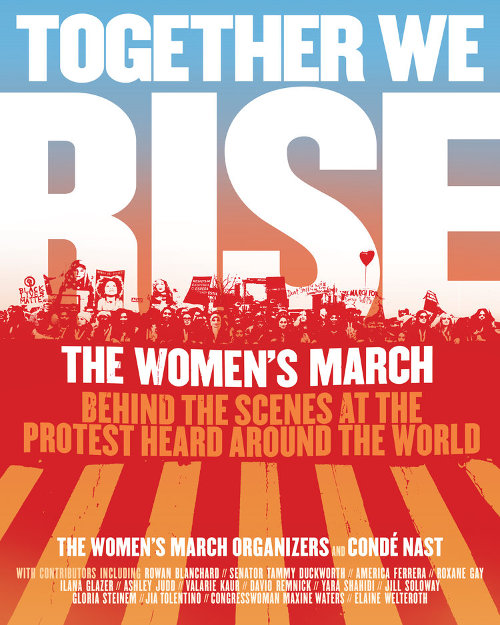 “The book is extremely important to us because women are so often erased from history,” Mendoza said. “We wanted to use this book to make sure this historical moment is not erased and women are given the credit that they deserve.”

Resistance can be exhausting, and compassion fatigue is a very real peril. But as an artist and an activist, Mendoza said she can’t separate emotion from her daily life. It’s about choosing the right emotion on which to focus, she said.

“Why do I work Saturdays and Sundays while my son’s asleep? Why am I working every moment of the day? It’s because I love immigrants. Immigrants are under attack in this country. It’s because I love freedom, I love the concept of freedom. I believe in the concept of democracy. That is the thing that motivates me and allows me to make sure that when I’m tired — and I do get tired — love is the thing that allows me to keep moving forward.”