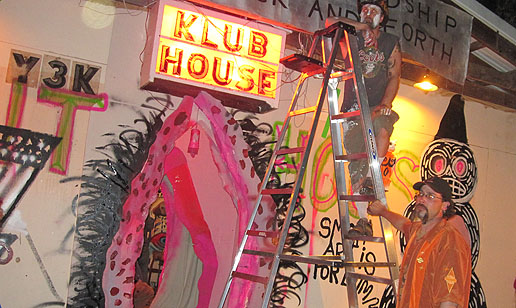 Paintallica, an art collective with a penchant for turning heads, stopped by their old stomping grounds of Iowa City Tuesday to put on an all-night artistic spectacle.

The group is inherently divisive (Their first show was titled “Happy Fucking Easter”), incorporating body fluids, sexual imagery, bladed tools and anything else that catches their artistic eye. Working from such extremes opens as many doors as it closes, the group says.

Tuesday’s event, located at Walnut Farms, was a sort of homecoming for Paintallica, who first came together as graduate students at the University of Iowa art school. Although a core group of nine Paintallica members were present, the event was open to the public, and dozens of Iowa City’s art enthusiasts showed up to see the group in action.

Working collectively allows Paintallica members to experiment in ways they might not otherwise be willing to try alone, and doing so requires members to leave their egos behind. “It’s easier to be brave in private,” one member said.

The willingness of the artists to paint over and destroy each others’ work prevents members from becoming attached to their art. Through this, Paintallica may grow as a group, transcending their individual artistic interests for the sake of collective expression.

When one of the event’s attendees became indignant after having his work painted over by a roller brush-wielding member of Paintallica, the Paintallica artist responded calmly, “First lesson: Surrender your ego.”

The group says there is a ceremonial component to the art they create, which was evident in the occasional tribal chants spontaneously breaking out among its members. They only have one rule: no anonymous complaints. Anything else is fair game.

Seeing the group work is truly a spectacle. Just don’t get attached to any of their work. When watching one member drive an axe through another artist’s work, it’s clear that they certainly aren’t. 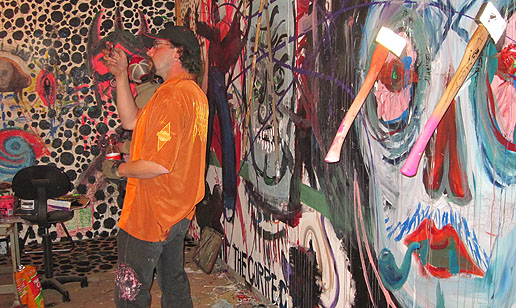