When I was a kid, you got your ice cream at a Baskin Robbins franchise in a strip mall next to a Fayva, where you got your plastic jelly shoes. I had heard of “drugstores” where you could sit at a counter and get malteds and melts, but I had never actually visited a place like that. What little I knew of these ice cream shops came from watching black and white movies and “Time Life,” Those Were the Days, nostalgia books that my best friend’s parents kept in their bathroom. I had always assumed those classic drugstores and ice cream parlors had gone the way of the dodo until I moved to Iowa City, sat at the counter at Pearson’s Drug Store and experienced the ‘50s chic while eating a tuna salad sandwich and washing it down with an authentic Egg Cream. Pearson’s has since closed, replaced by a bank, and Iowa City is the lesser for it. But there remains a place where that kind of old-fashioned experience still exists.

A mere 30 miles away from where Pearson’s once was, is the longest continuously-running ice cream parlor on earth, the Wilton Candy Kitchen of Wilton, Iowa. The Candy Kitchen features delicious chocolates, old fashioned phosphate sodas, and ice cream confections made with the pièce de résistance of the whole operation, the excellent homemade ice cream.

The building alone is reason enough to make the trip. Constructed in 1856, the interior has changed little since the first ice cream parlor opened there in 1860. The walls are covered with dark wood and mirrors, and the countertops are gray marble. All the fixtures behind the bar are authentic, but the best and most authentic fixture by far is the proprietor, Mr. George Nopolus. George has been in charge of the Candy Kitchen since he took over for his father in the 1940s, and he is a character right out of a Frank Capra movie, full of life and love for what he does, and lightning quick with one-liners. 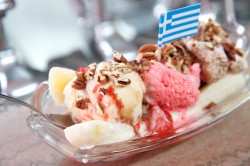 he man can also make some seriously delicious ice cream. The banana split was, bar none, the best dish of ice cream I have ever experienced. Served in a classic glass dessert dish, George made it right in front of us starting with a fresh banana, loading on three scoops of his homemade vanilla, chocolate and strawberry ice creams, drizzling marshmallow sauce, pineapple sauce, and finishing it off with three spoonfuls of chopped pecans. Aficionados, I know you’re thinking “No Whipped Cream? No sprinkles? No CHERRY?” I would urge you to trust the man behind the counter who has likely been making these dishes longer than you have been alive. You especially don’t want anything extraneous impairing your appreciation of what was the most delicious and flavorful strawberry ice cream I have ever eaten. I would go back and order just a scoop to savor that flavor again. Okay, perhaps several scoops. And maybe take home a half-gallon.  The strawberry ice cream is an experience unto itself, but I digress!

While at Wilton Candy, I also sampled the phosphates, a real old-fashioned soda made with any flavor of syrup you desire. The Candy Kitchen features several of their own classic recipes (a personal favorite of mine is the Hadacol. When I asked how he arrived at the name, George told me “I hadda call it something!”). On this particular visit, I asked him about the “Odd Ball” but he convinced me to try the Pink Lady, which is a little bit of strawberry, a little bit of cherry, and a pump of vanilla. It was then that I remembered a childhood dream, which was to literally TASTE the color pink. I then ordered a cherry coke, an authentic cherry coke: two pumps of cola and two pumps of cherry in phosphate. Far from experiencing the insulin shock I was expecting by this point, I felt flush with power, more alive than ever, and ready to try the homemade turtles.

Near the entrance, next to the sign-in book (which that day alone had already been signed by people from three different states) are two large cases of fudge, other other assorted chocolates, and a pile of freshly made turtles that are reasonably priced according to weight. The turtle followed the traditional recipe (chopped pecans covered with caramel and topped with milk chocolate) and was excellent.

For those that are not in the mood for sweets (though, really?), you can order a delicious luncheon sandwich, served plain or grilled. I recommend the tuna salad, buoyant with mayonnaise, served on white bread and cut into perfect triangles.

Since moving to Iowa in 1998, I have been consistently surprised by how uniquely special this place is. The Wilton Candy Kitchen is one of those places that reminds me how lucky I am to live here. Maybe if I wasn’t still experiencing such an amazing sugar high, my heart would twist with longing for a time gone by. As it is, I am happy enough being able to experience the delicious ice cream and the authentic atmosphere of the Wilton Candy Kitchen.

Kristy Hartsgrove is delighted to publicly revel in her love of all foods, sweet and savory. If you want to get a real kick in the pants, you should take her theatre classes at Coe College.