“A writer, no matter what the context, is made an outsider by the demands of his vocation.” — James Alan McPherson, in his Foreword to The Stories of Breece D’J Pancake 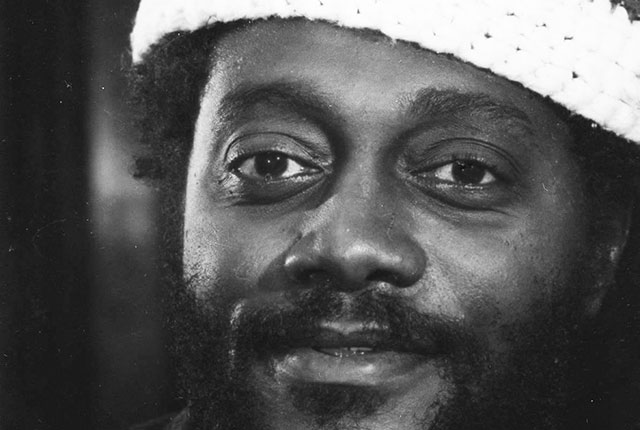 “When you get down there, you find Jim.”

That was my mentor’s mandate just before I departed for the Iowa Writers’ Workshop. She was the most comprehensively intelligent person I knew; I regarded her words as gospel.

I encountered James Alan McPherson immediately, and often; finding him took longer. This was 2006, and Jim appeared, to quote Lost Horizon, “most old.” His gait was a slow shuffle, his feet barely leaving the ground as he advanced from one spot to the next, as if he were actually a pushbroom given human form; he wore a Kangol as old and broken in as my first baseball glove; he spoke in the barely audible whisper of someone protecting a grave secret. His was the aura and posture of a man who’d carried a great weight for a long, long time.

Yet in his face I discerned a rare mix of kindness, generosity and understanding that in this society was so genuine as to be off-putting; it was akin to spotting a goldfinch hovering over a sunflower in the middle of a landfill. His countenance suggested he was in on a joke that was as brilliantly funny as it was profoundly sad, if only you were smart enough to peel back the layers.

This made sense, because Jim’s slice of American history was flavored by an intense intertwining of unspeakable tragedy and improbable triumph. His work is a study in the art of distilling insight and beauty from cultural incoherence and human cruelty. He was born into a world that held black life in even more contempt than it does today, in Georgia, in 1943. His father was an electrician who took to heavy drinking in the face of incessant, vicious racism. Jim studied at the historically black college Morris Brown, and worked as a janitor both there and during his time as a student at Harvard Law. He also worked as a porter. It was as though the Universe decided to cast him in the lifelong role of fly-on-the-wall, the objective observer on the margins, making sense of the world for the rest of us. He was, as they say, with us but not of us. He was our noble outsider.

That sort of weight is heavy and lonely to bear, but Jim bore it gracefully: in 1978, he became the first black person to win the Pulitzer Prize for fiction; he earned MacArthur and Guggenheim awards. His genius was incontrovertible. He existed in rarefied literary air.

Then, for several decades, he “disappeared” from the literary landscape. Jim would admit that even his siblings accused him of retreating from the world, settling into Iowa City like a cocoon and never reemerging. Years ago I came across a snide list on a major news aggregator site that reduced him to a backhanded footnote, the Pulitzer Prize winner the world had forgotten. An indictment of the world for sure — certainly not of Jim.

Jim had not retreated so much as he found peace in Iowa City. He’d carried his great weight, shared his great gifts and earned this port. The ultimate outsider found a community here, which makes sense. This city has always struck me as a patchwork quilt, where so many of the locals are like fabric left over from other projects, other lives that didn’t quite lead them where they expected, but rather where they needed to be.

While his written output dried up, Jim never stopped teaching. He was an especially keen and generous teacher, with a unique grasp of historical context and a prodigious ability to find the most significant subtext in the shortest scenes and sentences. He oriented his students in their own works, lighting the way, an intellectual Polaris. And then he pushed them forward, into deeper waters.

I workshopped under him, and we met regularly over a summer to discuss writing. He had the Protean gift of seamlessly transitioning between serious and off-color stories — about Richard Pryor, Chicago gangs, black luminaries, pre-Civil Rights Georgia — in a melodic, quiet, tender and assured tone. You could wade in Jim’s sentences.

I finally found Jim one morning in the summer of 2007. He sat on the porch of the Dey House in an impossible pose that suggested equal parts comfort and discomfort, as if Andrew Wyeth had painted him into his chair and Jim was a physical metaphor for life itself. We talked for a while about the Iowa River, Buddhism and a seafood truck that came from Texas or New Orleans every month, parked near the Dairy Queen and sold the best fish you could hope to find in the area.

A car pulled up to the curb, and a woman hopped out and determinedly strode toward us with a large yellow envelope in her hand. She had driven from Florida with relatively few breaks, during the scant time she had off work, to deliver a token of appreciation to a writer who’d been kind enough to read her novel and offer critiques and editing over the course of the past year.

“We don’t know each other, really. We’ve never even spoken!” Her eyes widened and welled with gratitude.

The Dey House was closed Saturdays, the front door locked, and she was devastated. Jim had the key, but he had to retrieve it from his home.
“If you leave it with me, I can put it in the writer’s mailbox later this afternoon. Do you know the writer’s name?”

As she extended the enveloped and said “I wrote his name on the envelope,” I saw the curve coming like the runner at second had tipped me off. And sure enough, there it was, written in big black cursive, like an unassailable truth: James Alan McPherson.

Jim died Wednesday, July 27, at the age of 72. He was surrounded by his lovely children Rachel and Benjamin, as well as a gaggle of friends and former students who comforted each other by swapping rich, colorful stories. Jim gave and gave and gave so much to the world that he quite truly — as that indelible day on the Dey House porch made clear — couldn’t keep track of the debts of gratitude owed to him. We here in Iowa City owe Jim a karmic debt: that his legacy — astounding, complex, important and beautiful as it is — shall be carefully unpacked, sorted, honored and never, ever forgotten.