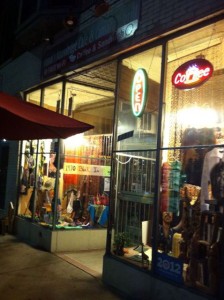 THE results of the 2008 election unfold before me early in the morning on a friend’s television in Rijeka, Croatia. As it becomes clear that Barack Obama has prevailed, I visit the website of my hometown’s daily newspaper. Linked I find videos of people in Detroit celebrating; black people celebrating our new, smart, black president. Professional news videos pull the heartstrings, but it’s the homemade videos that devastate me.

In the green market that day, old babas who know my provenance yell “Obama!” as I pass. For the first time in my life, I am proud of America.

Fast forward four years–protracted fights along party lines, a handful of victories, and some real disappointments–President Obama and Governor Romney contend for the title. My friend Goran, a recent immigrant from the aforementioned country, joins me to watch the debate at a bookstore and coffee shop specializing in books of the “Afro perspectives”-bent called Nandi’s Knowledge Café.

Ten or so regulars and a few first timers gather for the debate party. Nandi prepares fried okra, black eyed peas, french fries and serves red hot Jamaican ginger beer.  Prior to the debate, there is a presentation about black-owned comic book companies and the movement to boycott mainstream publishers who don’t support black artists, represent black characters, or employ black writers.

As the debate slumps along, our President plays dead. The smirking football team captain charms and evades. The incumbent is docile. We sit surrounded by books by Stokely Carmichael (aka Kwame Ture) and Eldridge Cleaver, watching our great black hope shrivel up under pressure.

The mind inevitably wanders as the performance fails to deliver. We are deep in Obama-country here; in the heart of the Highland Park enclave of Detroit, where the city recently chose to turn off the majority of its streetlights because of budgetary cuts. This is a black (94%) working class–or lately, looking for work class (22% unemployment)–town where people know damn well that Mitt Romney doesn’t care about them. But does President Obama?

Having prepped Goran for a wild night of good ‘ol fashioned TV-yelling, I sense his confusion. Rather than a group of riled up constituents, he is surrounded by lukewarm viewers yawning and occasionally murmuring a call or response. I am certain this is his first time being the only white person in a crowd and wonder how it makes him feel. I think about the relative ease I have talking about race–as an American having grown up entrenched in the politics of the Left, in a city where I don’t represent the racial majority. And, about the relative difficulty mainstream politicians have discussing it.

During these last four years the media has often discussed race as it relates to the current political climate. President Obama himself has flirted with the idea of a post-racial society. But, here, in America, in poor America, in Black America, in Indian Country, in los barrios, in shutdown white factory towns, and in all the places subaltern voices fail to be heard; race is alive. The rhetoric of the Right reminds us of this often–from the vitriolic language around the way “illegals” drain our system to the lightly shrouded discussions of the racial and ethnic makeup of the 47%.

After a lackluster debate, I am angry about the disparities that exist in these United States. This is not the stuff of the books that surround us at Nandis nor the emancipatory spirit of hope to which so many of us have subscribed. Like the streetlights in Highland Park we need you, President Obama, to turn back on.