Ed. Note: We have received a couple of comments about this article, specifically the inclusion of personal comments about candidate Brianna Wills made by former ICCSD School Board Vice President Tuyet Baruah. We appreciate the feedback, but stand by the article as written. Baruah’s status as a public figure who served six years on the board makes her on-the-record opinion of a candidate worthy of public consideration.

With 13 candidates vying for just five open slots, the Iowa City School District’s Sept. 8 school board election could bring a sea change for education in the IC area. Ten candidates are competing for four four-year positions on the board, and three candidates are running for a single two-year spot.

After six-year board member Tuyet Baruah’s resignation this summer, the seven-member board will retain just Brian Kirschling and Chris Lynch this September.

The new ICCSD board will face a slew of issues in the next few years including busing, redrawing some school boundaries, starting up a new high school and a huge 2017 bond vote. But the biggest issue at hand might be whether to amend the long-range Facilities Master Plan (FMP) and save Hoover Elementary. The plan also has North Liberty’s Liberty High School opening in 2017, as well as school renovation projects. 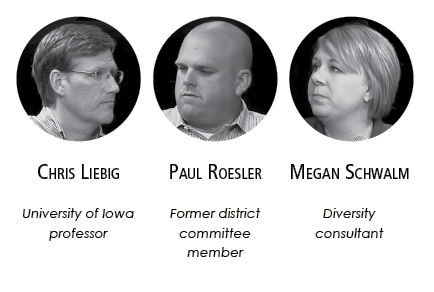 Each candidate has weighed in on saving Hoover in at least one among many questionnaires being circulated before the vote.

No candidate is against the FMP outright, but some want to change it and preserve Hoover Elementary, even as a new Hoover is set to open in 2017.

So far, Baruah, a board member since 2009, has only endorsed one candidate, Megan Schwalm, who’s running for the two-year board term. However, Baruah singled out one of the early entrants in the four-year race, Brianna Wills, citing a lack of decorum.

“I find it completely distasteful for Brianna to go around town asking about me, spreading rumors about my whereabouts, stalking me on social media and asking about whether my ex-husband is still in town,” Baruah said.

When reached by phone, Wills declined to comment on Baruah’s allegations.

Wills is a parent and stay-at-home mom who never attended public schools but has served as the district’s parents organization co-president.

“It’s a lot of money, a big commitment from our district voters,” she said.

As new schools open, redistricting will have to occur in some form or another, developed in tandem with a new diversity policy to better balance the socioeconomic makeup of the schools.

In 2013, the ICCSD board passed a now-rescinded diversity policy that would re-position students based on free and reduced lunch (FRL) student distribution data. Baruah was a vocal opponent of the FRL diversity policy and at the time called it insulting and offensive to associate minority issues with purely economic metrics. The policy would later be rescinded

The hot-button policy is an example of discord on the board which has lacked consensus on key issues for many years. Many votes, like the passage of the original FRL diversity policy and Superintendent Stephen Murley’s recent three-year contract extension, have been 4-3 splits.

Candidate Wills said that board cohesiveness is a big concern for her. She’s served on several ICCSD committees and said there has been “a lot of dysfunction between board members” and “disconnect between the board working as a team and the administration.”

She added that she and candidate Chris Liebig will not see “eye to eye” on many issues, noting that they fall on opposite sides of the “save Hoover” debate. (Wills is opposed, noting that “Hoover was voted for closure three years ago and then the master facilities plan was built around that premise.”)

Current board president Chris Lynch says some of his top issues moving forward are securing funding in 2017, improving proficiency scores among students and building a better sense of board cohesion. 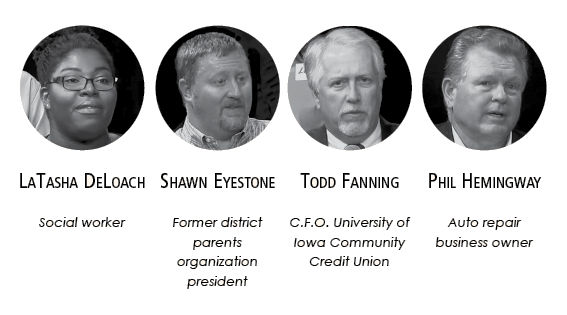 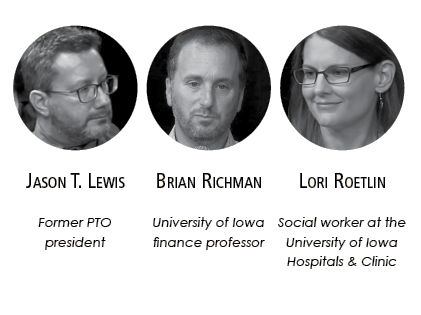 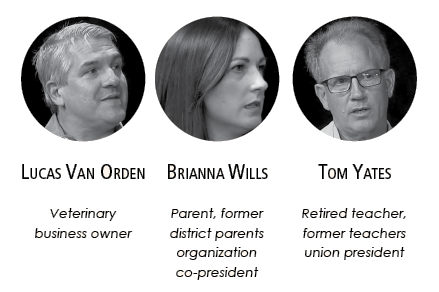 But problems that face the board go deeper than team-building and finding consensus.

The original 2013 diversity policy was rescinded earlier this year after being found in violation by the U.S. Dept. of Agriculture. The new policy will take into account student populations of special education (no more than 20 percent per school), populations of low-income students (less than 50 percent) and English-language students (lower than 20 percent) to balance socioeconomic numbers for more equitable district distribution.

The issue surrounding the superintendent’s contract is partly based around his comp time, which allows him to supplement his ICCSD income with outside consulting deals and not surrender pay from the district. He makes about a quarter million per year in salary, retirement contributions and allowances for vehicle and other items, but details about his consulting deals are not available to the public.

Candidate Phil Hemingway said that the superintendent should not be allowed to pursue outside pay.

“It’s a full-time job,” Hemingway said, “If he thinks he’s that knowledgeable that he’s got everything fixed here and he can go work somewhere else for pay, maybe we should give him time to pursue that.”

One of those outside deals has linked Murley to an outfit that’s under investigation for a no-bid contract with Chicago Public Schools (CPS). CPS has since moved to end its connection to the National Superintendents Academy (also known as The SUPES) and its disreputable CEO Gary Solomon. Murley was shown in a tweet from the company and Solomon is also the owner of Synesi, which did an efficiency audit of ICCSD a few years ago.

Retired City High teacher Tom Yates agrees with Hemingway. Yates, who was the union rep for ICCSD teachers, said, “Superintendents should not be allowed to participate in consulting services during their employments in districts. Do they not have enough to do as superintendents?”

He was uncomfortable with Murley’s contract deal, and said he believed that the role of the board is to be “a conduit for the values of the community,” which weren’t being met by the comp time deal.

Putting it a different way, Hemingway said, “The board’s only employee is the superintendent.”

The new restriction limits input from the audience, said Hemingway. “Many times new information is brought in,” but “no one in the audience has a chance to rebut that,” he said. The public response must wait until the following meeting.

Chris Liebig, on his education blog, said that “on policy issues the board should lead, not follow, the administration.” He’s running for the two-year seat.

Outgoing board member Baruah has also expressed concern over the new rule. Her colleague, Patti Fields has served on the school board since 2005, and worked with two superintendents (Lane Plugge and Murley). Fields has endorsed LaTasha DeLoach, calling her “intelligent, thoughtful and bold — the kind of person our district needs to move forward.”

DeLoach said that she was concerned by recent decisions about busing and special education staffing, which she said “have not been successful or well-received.” DeLoach said she would be the first African-American woman to serve on the school board, but adds that she doesn’t want to be viewed simply as the “equity” candidate.

“I am uniquely qualified,” she said, “The board will be stronger because of my connections to our community. I work with children and families, and will continue to work with people of color and our low-income families.”

A candidate forum on Special Education will be held on Sept. 3 from 6-8 p.m. at the Iowa City Public Library, Meeting Room A.