I’m guessing that many of you have never heard of Tommy Keene. He’s a working musician who has accumulated a fairly deep catalog over the past 30 years, but he has never scored major hit and, in fact, the man has had his share of setbacks. Keene’s experience with Geffen Records in the 1980s, for instance, is a classic cautionary tale—one variation on an infinite number of horror stories about the big, bad music industry. 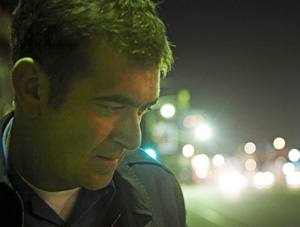 In the time since he began playing professionally in the late-1970s with the late, great power pop group The Razz, the music industry has gone through massive changes—from the introduction of the compact disc and the goldmine sales bonanza that followed to the radical transformations made possible by the internet. As Notorious B.I.G. once said, things done changed.

“Radio is gone, MTV doesn’t play music, and no one buys records anymore,” Keene tells me. “I’ve been lucky because I’ve always found people who want to put out my records.”

I first saw him live in 1987 when he opened for The Replacements (a quintessential 1980s “college rock” group, what they called “indie” or “alternative” back then). Keene blew me away that night with his finely tuned guitar pop, and since then he has delivered consistently stellar records. Into the Late Bright, his most recent release, continues a killer streak that began when he reemerged in the mid-1990s on Matador Records. The new album’s standout track, “Tomorrow’s Gone Tonight,” is classic Keene—complete with instantly hummable melodies and the kind of Byrds-influenced, chiming guitars that R.E.M. helped popularize in the 1980s. And the closing song on In the Late Bright, “Hide Your Eyes,” seamlessly brings the past and present together.

“It’s a very old song, written in ’84,” he tells me, “and it has that jangly guitar sound I used a lot during that period.”

Discussing the early-1980s, Keene explains, “The goal back then for most artists was always to get signed to a major label, but after about three years of me banging around, getting nowhere—I noticed that a lot of bands around that time were figuring out how to put out their own records.” The punk movement had opened up a space for left-of-the-dial music through a national network of music venues, independent record companies, and college radio. “The majors didn’t think that what they called ‘college rock’ was instantly sellable,” he says. “Of course, later in the 1980s the major labels came around when they signed groups like The Replacements and Hüsker Dü.”

Keene took his own leap to the majors in the mid-1980s—though the experience was far from satisfying, plagued by cigar-chomping record men, ill-conceived company directives, and plain old bad luck. The problems began in the recording studio. By and large, major labels did not turn musicians loose in studios without the guiding hand—or two, three, and often more. The meddling came from name-brand record producers, label executives, and shadowy figures named A&R reps who were supposed to be looking out for the artists’ interests but who usually were there to make sure a radio-ready hit was delivered. This setup typically resulted in slickly overproduced albums (see The Replacement’s 1988 album Don’t Tell a Soul for a case-in-point).

Discussing his time at Geffen, Keene says, “It was the perfect example of too many cooks in the kitchen. Sometimes having a lot of outside input can be helpful, but usually not,” adding, “I was indeed a victim or A&R’d to death.”

Compared to most rock albums from that era, Keene got off pretty easy; his two Geffen releases don’t suffer much from the era’s overcooked sonic excesses. “Nowadays,” he says, “I don’t have that problem, but I run ideas by various people whose opinions I trust if I need a little guidance.”

Today, he has a home studio, which allows Keene to do virtually everything himself. (He’s a multi-instrumentalist: “I started taking piano lessons when I was six-and-a-half, and then I took up drums and guitar—in fact, I played drums until I was 16.”)

The next problem occurred upon the release of his record. “The thing about the major label experience was that if your record doesn’t sell within six weeks, they moved on to other projects.” And unfortunately for him–when Songs from the Film was set to debut in 1986–a major scandal rocked the industry, one that was prompted by the fact that major labels typically broke new acts back then by offering bribes to radio.

“I remember talking to the head of promotion at Geffen,” Keene recalls. “He was this complete Mafia guy with a cigar, and he said, ‘We can’t hire anyone to push your record so it’s basically dead in the water.’” He adds, “All this build up and then, poof, the momentum just evaporated.”

Keene released one more record for the label and then went back to life as an unsigned act, spinning his wheels and doing a lot of touring in the early-1990s. A fan of his, Gerard Cosloy—who founded Matador Records, home to Pavement, Liz Phair, and other classic alt-rock artists—tried to get Keene signed to Virgin Records during this time, but it didn’t work out. Another major label became interested, but that opportunity dried up as well. (In both cases, the executives who wanted to sign him were ultimately fired.) After being dealt three strikes by the major label system, Cosloy and Keene decided to release his records on Matador, to much critical acclaim but no R.E.M.- or Nirvana-level sales.

I ask him if, since the Geffen debacle, he has ever held on hope for a hit. “The last time I might have had a shot at a radio song is the Matador EP Love Is a Dangerous Thing, back during the whole alternative rock explosion. And in ’96 we did a video and hoped to have it on MTV’s 120 minutes program, which also didn’t happen,” he says, chuckling. “After that, to be honest with you, I just continued making records to for my own pleasure, and if there’s an audience for that, great.”