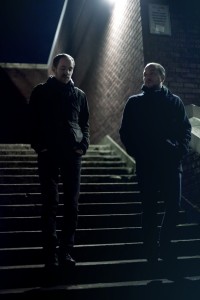 On November 7, The Helio Sequence, a Portland-based indie pop band, will be playing at The Mill. The duo of Brandon Summers and Benjamin Weikel recently released their fifth album Negotiations on Sub Pop. I got an opportunity to catch up with Summers before The Helio Sequence starts their fall tour to discuss various music topics and life on the road.

In talking with him, I was frequently struck by how articulate he was in talking about the music. Sometimes, bands do things because it sounds sort of cool or they like it without thinking about it too much. While there was certainly some of this here with Summers as well (it wouldn’t be a good band if there wasn’t), it was striking how much craftsmanship had gone into the record and how deliberate they were in its construction. The album wasn’t born out of a few frantic sessions. Instead, it came from a long process of thinking, creating, listening, tweaking, and re-listening.

We began the conversation with discussion about the new album. As I learned in the conversation, the process of getting this album out was a long, interesting one. While touring in support of their 2009 album Keep Your Eyes Ahead, their studio in Portland was flooded, forcing them to find a new space to play in. The space that they found was a 1,500-square-foot practice space that is bigger than the house Summers currently lives in with his family. In the process of finding and moving into this new practice space which took a while, Summers noted that he and his bandmate Benjamin Weikel had been listening to a lot of records, especially since both men had bought new record players for their homes.

While Weikel listened to Cluster, minimal techno and library music, Summers got really into Frank Sinatra. Particularly, he found the darkness of Sinatra’s suicide records–Songs for Young Lovers, In The Wee Small Hours, Close To You, and Only The Lonely–to be particularly inspiring, taking cues from the songwriting on those albums. Summers commented that these new influences were only a part of the mix. The duo also wanted to bring back the sound of the first two albums Young Effectuals and Com Plex while “dialing it back to emphasize songwriting”. The resulting mix created an album that has a nocturnal dark sound, which Summers says is due to the fact that he is a father to two daughters–aged 4 and 1 1/2–and could only write music at night. He also encourages everyone to listen to the album at night rather than during the day.

Even though the musical influences can, essentially, be pinpointed, Summers said something that really intrigued me. He said that this album was made just to challenge themselves to do something new. He said that “there was always more to learn” and more to be influenced by. Summers said they could have just followed in the pattern of Keep Your Eyes Ahead, but following the ethos of always wanting to learn and expand, they really wanted to keep going forwards and do something difficult for themselves. Suffice it to say, they are really happy with how the new album has come out.

While the album was a new direction, one thing that Summers assured me of was that the live show hasn’t changed. The duo still want to go on stage and kill. But, now that they are headliners, Summers noted that they can now play more with dynamics. He noted taking cues for the live show from Rufus Wainwright, one of his favorite artist and someone who can move across a series of different styles and sounds during the course of an hour-long set while keeping the audience’s attention and interest. While he does note that touring can be difficult with a family at home–he talks to his family via Skype while on the road–Summers does love the road and is looking forward to playing the new album live.

After 20 minutes and some talk about various recording equipment–Summers and Weikel have an arsenal of analog and digital equipment in their studio as well as an interesting on-stage set-up to speed up changeovers between songs–Summers and I wrapped up our talk. When we parted ways, he seemed excited to get on the road, and I was certainly excited to see them play again.