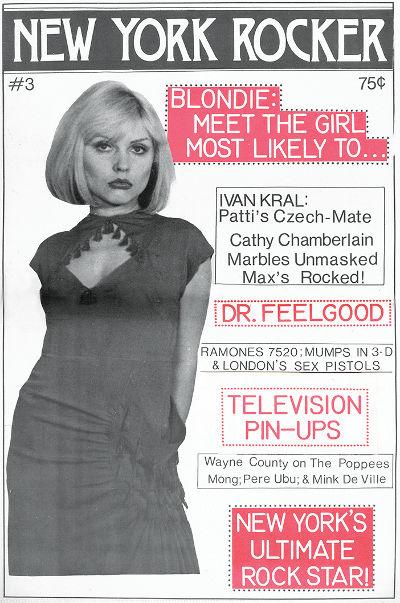 Writer, actress and photographer Lisa Jane Persky is surely the only participant in the early CBGB punk scene who also appeared in When Harry Met Sally. After moving to Greenwich Village in the early 1960s, she met several colorful characters — from Divine and Debbie Harry to Lance Loud and Yoko Ono (the latter of whom was Persky’s building’s superintendent when she was a little girl).

Starting Mar. 22, Persky is bringing downtown New York to Iowa City in her photography show X-Offenders: A Year in the Life of a Proto-Punk (1976), hosted by the Englert Theatre’s Douglas & Linda Paul Gallery. She will also appear in a series of events that includes a reading, writing workshop, film screening and artist talk during the week of Mission Creek Festival.

Persky’s photography show features dozens of previously unseen images of punk bands such as Blondie, Suicide and The Mumps, as well as Off-Off-Broadway playwright H.M. Koutoukas and John Waters collaborators David Lochary and Divine. The photos span 1976 through February 1977, when an up-and-coming Blondie flew to Los Angeles for their first gig at Whiskey A Go Go. During that trip to L.A., Persky auditioned for her first role on television, which kicked off a successful acting career in Hollywood.

“1973 to ’77 were supposed to be my college years,” she tells me. “I was disillusioned with institutions and bureaucracy, and maybe the universities could tell because I didn’t get into either school that I most wanted to go to.” Instead, Persky enrolled in the University of the Street—where she majored in badassology, with minors in acting and photography.
Persky previously attended New York’s High School of Art and Design and had always wanted to work in the arts, which led to her joining the punk paper New York Rocker as a founding staff member. “I wanted to play,” she says, “so I sought out fun things to do and said yes to anything I was offered that might fit my freewheeling agenda. My idea was as general and open to ridicule as it sounds.”

Her striking photo of Debbie Harry, which is included in the Englert show, appeared in issue three of New York Rocker (Blondie’s first cover story). “When I started working on New York Rocker in ’76, I became interested in casual composed portrait photography, lighting — especially low-light situations — with no flash,” Persky continues. “Everyone in the scenes I was circulating in — primarily theater and music—was young and beautiful, and I took pictures of who I decided to or who was around whenever time allowed.”

During this period, she also appeared with Divine in a stage production of Tom Eyen’s Women Behind Bars before appearing in films such as The Great Santini, The Cotton Club, The Big Easy and When Harry Met Sally. Along the way, Persky played Dirty Dee in the craptastic masterpiece Kiss Meets the Phantom of the Park, about a mad scientist who replaces Kiss with animatronic impostors.

She has recently been revisiting her New York roots with an in-progress memoir and a piece for the latest issue of The Pitchfork Review (#8), which served as a springboard for this photography exhibit. Persky is also preparing a show catalog that will go into some detail about her photographs, whose negatives had been stored in archival sleeves for forty years.

“I regret not having done more of it,” she says, reflecting on missed photo-ops, “but it was costly to shoot and to process film, and I never had much money. I worked several jobs simultaneously. None of the gigs paid much and New York Rocker was a labor of love.” At long last, these photographic labors of love — Persky’s love letters to downtown New York — will finally see the light of day. In Iowa City, of all places.

Kembrew McLeod’s book on punk, disco and Blondie’s Parallel Lines will be published on Mar. 26 in Bloomsbury’s 33 1/3 series. This article was originally published in Little Village issue 195.