We have been on a climate strike for 56 weeks, and every week we hear from people asking how they can help us, as we push the ICCSD, the IC City Council, the University of Iowa, and now Iowa Gov. Kim Reynolds to take real action on our climate crisis.

That means YOU, and the school board, the city council, UI students, faculty and staff, and everyone in Iowa City can send in a comment about all the toxic particulates spewing out of those nice smoke stacks on our river front and Burlington/Riverside streets — and only yards away from apartments, hotels, restaurants, businesses, health centers and daycare centers (with babies).

An estimated 4 million people die prematurely each year from these pollutants, according to the World Health Organization, which is why most universities and cities are closing coal and natural gas power plants, not maintaining them!

This easy public comment action will take only a few minutes — and it really is easy.

Here are the three easy steps to make a public comment:

1) Check out the whopping list of emissions below, courtesy of the University of Iowa

2) Then, email Chris Kjellmark at the Iowa Department of Natural Resources and ask why the University of Iowa should burn coal for five more years when cleaner alternatives exist, and the University of Iowa will knowingly release toxic particulates, sulfur dioxide, nitrogen oxides, volatile organic compounds, carbon monoxide, lead and other hazardous air pollutants within a few yards of so many people, students and children?

3) And then, email our mayor and city council, and ask them to make a public comment on behalf of the City of Iowa City and its residents. 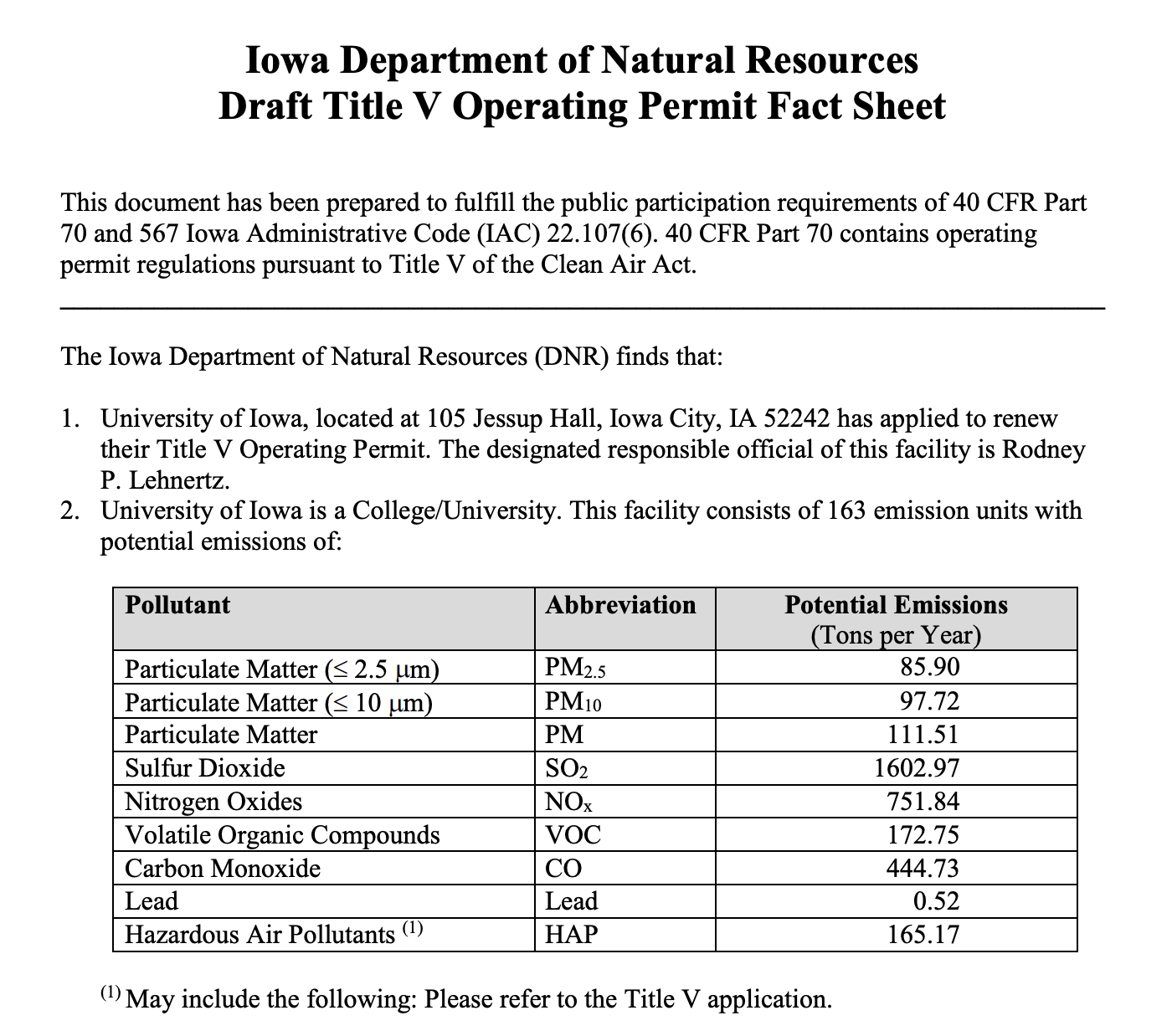 PLEASE NOTE: What is missing, of course, is the list for tens of thousands of tons of CO2 emissions from dirty coal and dirty natural gas, which makes the power plant the single largest CO2 contributor and climate change culprit in our town.

Keep in mind: While burning coal for five more years is totally insane, the 61 percent increase in burning natural gas at the power plant — that biomass stuff is a small percentage — is even worse, due to methane and fracking emissions!

Sadly, this list DOES NOT include the toxic coal ash, which is transported all the way up to Waterloo, Iowa and dumped into an unlined quarry.

And sadly, this list DOES NOT include the devastating impact of coal mining to get the coal to Iowa in the first place, including toxic coal slurry, poisonous discharges into waterways, and black lung disease for workers.

What are these pollutants?

According to the Union of Concerned Scientists:

Sulfur Dioxide is linked with asthma, bronchitis, smog, and acid rain, which damages crops and other ecosystems, and acidifies lakes and streams.

Last year, CO2 emissions increased by 3.38 percent in Iowa. It’s time for Iowa City and the University of Iowa to step up their efforts and stop burning fossil fuels.

As U.N. Secretary-General António Guterres warned world leaders at the United Nations in December, “The point of no return is no longer over the horizon. It is in sight and hurtling toward us.”

In solidarity with all climate strikers today around the world! One strike, one world. We have a climate emergency. No more excuses.
Week 56 in Iowa City@GretaThunberg @FFF_USA @Fridays4future pic.twitter.com/vH6vjqQKn4

And thanks for joining our climate strike, and making Iowa City a leader in our fight to deal with our climate crisis — and our air pollution crisis.