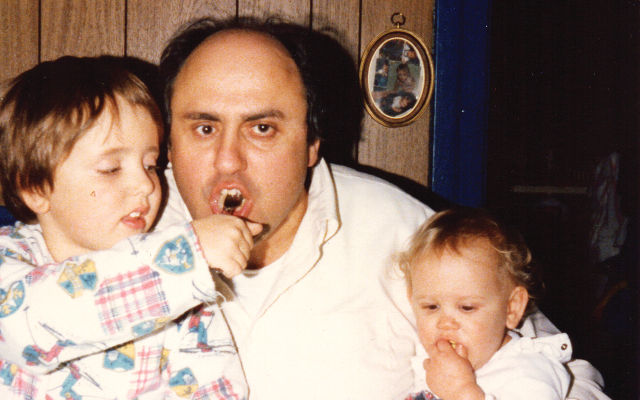 That’s me feeding my father, Fred, in the picture above. My sister, Kate, is on the right. I don’t remember the occasion, but it must have been an occasion. In those days taking photos was mostly reserved for occasions.

I fed him a lot again recently—almost all of his meals during the last few weeks of his life; coaxing him to eat, because dying really takes a lot out of you, and you have to keep your strength up for it.

My father’s last meal was chicken soup, cottage cheese, peaches and chocolate ice cream—things he enjoyed, things that were easy for him to eat. Nothing special about it, just hospital food—hospice food, actually—which you can order off of a menu, 24 hours a day. When you’re dying, they let you eat whatever and whenever you want. You only die once, so it’s all about comfort.

Even the furniture is comfortable. When you’re at this point, the patients’ rooms have recliners or couches in them because visitors here are in for the long haul; this is it pal, so you might as well get comfortable, too. Or as comfortable as you can be, anyway, doing this.

He was a voracious eater his whole life, so coaxing him to eat was something I never imagined I’d have to do—especially ice cream, which he loved. But cancer creates a lot of moments like that. Cancer changes everything.

“Do you want some more ice cream, dad?”

This was the last conversation I ever had with my father.

Last June, about a week before his 75th birthday, my father woke up at three in the morning with chest pains. I was in Chicago to help him retire and close his office after practicing law for 51 years.

The chest pains pass, but my mother thinks he might be having another heart attack, so she wakes me up and insists I take him to the hospital, just to be safe.

It’s a warm night, and I have the windows down as we drive up Ridge Avenue to Evanston Hospital. We’re almost the only car on the road. I’m tired, so we don’t really talk much.

“This is ridiculous,” he says, to no one in particular.

He thinks for a moment.

Little does he know. Little do I.

They run tests in the ER, which come back clean.

“Good news, Mr. Cohn. You didn’t have a heart attack tonight, but we found some dark spots on your lung that are pretty troubling. Here, call this number and make an appointment to go get a biopsy. Soon.”

After the biopsy, the doctor calls with the results. “It’s not cancer,” he tells us. Much rejoicing is had. Three hours later he calls back, “I’m terribly sorry, but I was looking at the wrong chart earlier … ”

So, cancer it is then. More tests are done. Treatment plans are devised.

His pain ebbs and flows, mostly flows, but three months go by and it’s remission city. So far so good. Sometimes these things turn out okay, right?

And yet, and so—a month later, much more pain, much worse than before. The cancer is back, more places than it had been: bigger, stronger, meaner.

He’s at home, in hospice for three months and, not quite 10 months after that first 3 a.m. trip up Ridge Avenue for the heart attack that never was, he dies.

Even before cancer, things were declining, and people would ask me, because that’s what people do.

“Is your father ever going to retire? Have they thought about moving? They have places, you know, for people who … need help. My grandmother moved to one.”

These were all fair questions, but I knew he never would. Not him.

“He’ll never leave this house unless it’s feet first on a stretcher.”

And he did. And I helped carry the stretcher down the front steps.

He had been at home for almost three months before he couldn’t be there anymore, declining steadily, his body and his mind racing to see which would check out first.

It was nothing he hadn’t done for me countless times, what all parents have done for their children.

You do your best, just like new parents do, making it up as you go because you’ve never done this before, but it’s still full of surprises. That’s another rule: There are always surprises.

I know this cancer will take his life, but I don’t know how. I ask his hospice nurse what actually kills people who are dying of cancer. She tells me there’s usually some event, which sets things off and speeds up the process.

“Things move fast after that.”

Days become weeks become months, one indistinguishable from the next as the fatigue sets in. When my tank is empty, my back wrenched from lifting him in and out of bed, on and off the commode chair, in and out of the shower, his hospice nurse suggests respite care—moving him elsewhere, “for a short break,” just for a few days—so I can get some rest.

This suggestion has been made before, a number of times, but I dismissed it.

This time, I agree.

Leaving the nursing home is the first time I really cry. It feels like such a cliché, “I just put my father in a home,” I think. I hate clichés.

When he comes home, he’s home for less than a day when his “event” happens. This moves him beyond my ability to care for him at home any longer.

The ambulance comes, two fit young men in crisp white shirts and their hydraulic stretcher, to take him to the hospital.

Together, we lift him onto the stretcher, swaddled in the bedding I’d put on the bed only a few hours prior, the bedding he’s now bleeding out into. We wheel him to the door, just a few feet away, and they tell me they have to move him into a stair chair to take him down the stairs. Another move, another trauma.

“Let’s just carry him down in the stretcher,” I say.

“I have a policy, too. And it’s to keep my father as comfortable as possible at all times.”

They look at me, they look at each other. They are fit young men. Challenge accepted, they shrug. We carry him down.

While they prep the ambulance he tells me he’s cold, even though it’s warm out. He’s almost always cold lately, so I run inside and grab a hat to put on his head. It’s a Bears hat, which he had given to me once, and now I’m giving it back. Stay warm, dad.

He answers the first question correctly, he knows his name, but he gets the rest wrong.

He doesn’t answer right away, lets the question sink in for a bit. I think, by now, he knows.

The nurse laughs. I laugh. He laughs. He gives us that gift. It’s a beautiful gift. Even cancer has rimshot moments.

The day after his memorial service was Mother’s Day. There was a lot of food around, so I walked some over to the neighbor’s. He’s the father of my oldest friend, and he had just started chemo and couldn’t make it to the service.

I can’t save his life, I can’t beat his cancer, but I can bring him bagels and lox, so I do that. We eat, we talk, I make plans to take him to a movie, something he and my father did with us countless times while we were growing up.

When I walk home there’s a man on the porch with a young girl.

“Hello,” he says, “My name is Pablo. I read about your father; he was my attorney, and I wanted to come see you. This is my daughter.”

He gets teary-eyed as he tells me how he had been in trouble, how my father had helped him, how he worked hard and got his life together and became a barber. How he used to come cut my father’s hair to work off his fee. A familiar narrative.

“I wouldn’t be with my daughter if it wasn’t for your father,” he tells me, “I can never thank him enough for that. She’s my life.”

“Thank you for saying that,” I say, getting teary myself, “It means a lot.”

I cry, but I feel better.

I feel better because even though I don’t have my father with me anymore, to thank for all he did for me, she now has hers. And through that, through her, he lives on.