X, an original 1977-era punk band, has remained one of my all-time favorites for decades, but I never got to see them until a recent show at the Pageant Theater in St. Louis. It was fitting to watch X in Missouri, the setting for Road House — the craptastic Patrick Swayze vehicle that featured X co-founder (and actor) John Doe as a bad-guy bartender. Vocalist Exene Cervenka also made Missouri her home for a few years during the aughts, before a medical scare brought her back to the support network of friends she developed over the years in Los Angeles.

L.A. is the city that defines X, whose songs and albums are loaded noir tales about the dark side of Tinseltown, particularly on the group’s 1980 debut, Los Angeles. That album has recently been reissued by Fat Possum, along with three other classic albums — Wild Gift (1981), Under the Big Black Sun (1982) and More Fun in the New World (1983) — a one-two-three-four punch that is a nearly unparalleled run in punk history. The rock-solid songs and back-to-basics production by Doors keyboardist Ray Manzarek created a strong body of work that still endures.

“The thing that makes them consistent is that Ray wanted to have great performances,” Doe told me. “He didn’t try to be tricky, didn’t try to use the latest sounds. He wanted us to get a good replication of the songs with the experimentation and also a great performance, because he knew that if we had that, then it would transcend the time that it was recorded. I think the Doors records kind of did the same.”

Cervenka, born in 1953, moved from Florida to California in 1976, right before the punk explosion reshaped the L.A. musical landscape — a scene that Penelope Spheeris captured in her 1980 documentary The Decline of Western Civilization, which featured X, the Bags, Germs and other important bands from the L.A. area.

Cervenka became romantically involved with Doe — born in the Midwest in 1953 but primarily raised in Baltimore — after meeting in a writing workshop at Beyond Baroque, a bookshop that was one of the centers of the city’s poetry scene. “We met in the very first session we both came to,” Doe said, “and I talked to her that night and we hung out. There was no gazing from afar. She was the one person that I knew I had something in common with, and she was the most interesting person in the place.”

A high school dropout who’d written poetry since she was a child, the self-trained Cervenka got a job at Beyond Baroque not long after arriving in L.A. “Then I started going to the workshop and that’s where I met John,” she said. “It was kind of a bunch of fortuitous things that happened.”

They married in 1980 and divorced in 1985, but the two have remained musical partners — working together in X and the countrified Knitters, a band that also includes Blasters guitarist Dave Alvin, who headlined the Iowa Arts Festival this summer. (Alvin briefly joined X after founding guitarist Billy Zoom left in the mid-1980s, around the time when the band recorded a classic version of Alvin’s “4th of July”; Zoom returned to the fold by the 1990s).

This period is documented in Doe’s recently published book, co-written with Tom DeSavia, More Fun in the New World, a panoramic survey of L.A.’s post-punk music scene that weaves together essays by Doe, Zoom, Alvin, Black Flag’s Henry Rollins, Jane Wiedlin and Charlotte Caffey of the Go-Go’s, Circle Jerks’ Keith Morris, Lone Justice’s Maria McKee, Louis Pérez of Los Lobos, artist Shepard Fairey, filmmaker Allison Anders, actor Tim Robbins, skater Tony Hawk and others. It’s akin to an oral history, but instead of serving up bite-sized anecdotes, More Fun’s contributors have plenty of room to relate their own nuanced perspectives — all of which are interwoven within a fairly dark narrative arc. 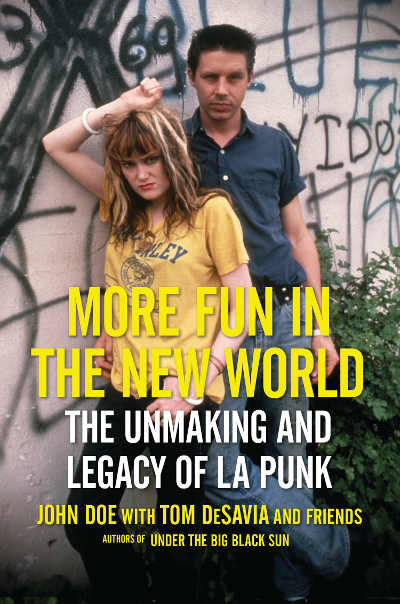 Along with Zoom’s economical rockabilly guitar riffs and the propulsive rhythms of D.J. Bonebrake, Cervenka and Doe’s off-kilter harmonies define X’s aesthetic — a dissonant sound resulting from the car-crash combination of musical expertise and naivety. Zoom, a multi-instrumentalist prodigy who had already been playing with Doe, at first balked about bringing a “girlfriend” into the band. It also took some time for Doe to convince Cervenka to join, because she had no previous musical experience or ambitions.

“Billy should’ve been skeptical about me joining the band,” she said. “I’d never been in a band before and he’d been playing since the ’50s with people like Etta James, Booker T. and the MG’s, Gene Vincent, among others. He plays seven instruments, and has since he was a small child. He’s a genius musically. John also has been playing since he was a kid and he’s obviously really gifted. D.J. is an amazing drummer and vibes player.”

But in the DIY world of punk, a lack of traditional musical skills can lead to the happy musical accidents that made X’s music so special.

“I was the least likely person to team up with Billy Zoom, and the fact that he was open-minded enough to do that is a testament to his perceptiveness, intuitiveness and also his ability to go against the grain of what he would normally do,” she said. “There are many times I thought, ‘This is ridiculous. I can’t be in this band; I’m not good enough to be in this band.’ But then something would happen and we’d have a lot of people come see us. It was fun and we just kind of fell in together finally.”

While living together, the couple inspired each other lyrically and musically, such as the time when Cervenka scrawled the line “Johnny hit and run Paulene” on a piece of paper and taped it to a door in their apartment. Doe said he walked by it for several weeks until he had the idea to develop it as a song.

“She wrote that line, ‘Johnny hit and run Paulene,’ and I wrote the rest. For ‘Your Phone’s Off the Hook,’ Exene wrote most of that and I wrote a piece of the second verse, or something like that. I wrote most of ‘Los Angeles,’ but she wrote all of ‘The World’s a Mess.’ But within those, we’d edit each other’s writing, and then I would have to add or subtract things in order to make them work within the song so that the meter would stay within the melody or the timing of the song.”

During their St. Louis show, X showcased songs from those first four albums. Fat Possum, their new home, is a Mississippi-based label that released early records by the Black Keys and helped revive the careers of bluesmen Junior Kimbrough and R.L. Burnside.

Cervenka notes that those albums have never gone out of print and have remained steady sellers over the years, though X still doesn’t have a gold record — “which is called creative bookkeeping,” she quipped. “Slash, Warners, yeah, whatever. I just hope we can keep doing it for a little while longer because I’ll be really sad when it stops.”

The band has a few songs in the can, and they plan to return to the studio for an eventual new release, but for now they remain focused on playing live shows. Cervenka admitted that it’s not as if X is a Partridge Family-type group who gets along harmoniously at all times, but the important thing is what happens to them musically after hitting the stage.

“It kicks ass to still be around,” she said. “I’m really proud of us.”