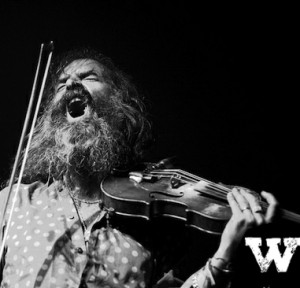 Welcome to another edition of the Weekender. There’s not much to lead in with this week, except that it’s a music-heavy one!

In 1994, Australian post-rock pioneers, The Dirty Three set off on a string of U.S. tours with a number of bands such as Pavement and The Jon Spencer Blues Explosion. Their first self-titled album was released that summer to widespread critical acclaim. They’ve collaborated with Cat Power, Bonnie “Prince” Billy, Low and PJ Harvey. Violinist Warren Ellis has been a longtime collaborator and member of fellow Australian, Nick Cave’s band. In fact, Nick Cave has said that The Dirty Three is his favorite live band, “no contest.” With just drums, guitar and a violin, the Melbourne-based trio create instrumental music that ranges from noisy post-rock to down tempo atmospheric ambient soundscapes. They have eight studio albums under their belt, the latest of which came out earlier this year.

Opening for The Dirty Three is a band that is currently rising in the ranks of the American indie music scene, Mission Creek alumnus Dark Dark Dark. The Minneapolis ensemble is often described as folk-pop and noted for their sensibility of New Orleans jazz throughout their catalog. Speaking of which, their catalog is about to expand on Oct. 2 with the release of their third full length album, Who Needs Who. They’ve received positive critical press from Pitchfork, NPR and Paste Magazine.

Nellie McKay‘s resume is impressive. She has released five proper studio albums, one of which was produced by Geoff Emerick, the same man who produced The Beatles’ albums, Revolver through Abbey Road. Another is a tribute album to Doris Day. Her music is smart, poppy and eclectic. McKay makes herself difficult to categorize, but tends to create jazz infused pop while allowing her commanding vocals/lyrics to lead the way. She has been asked to write songs for television and film, and her music has been featured in “Rumor Has It…”, “Weeds”, “P.S. I Love You” (which she also acted in), “Boardwalk Empire” and more. First and foremost she is a songwriter, but her talent extends far beyond writing songs. In 2006 she made her Broadway debut in the production, The Threepenny Opera, acting among co-stars, Alan Cumming, Jim Dale, Cyndi Lauper and Brian Charles Rooney. Her role as Polly Peachum earned her a Theatre World Award for Outstanding Performance.

Every year The University of Iowa’s Scope Productions puts on a big outdoor show on the Pentacrest to celebrate Homecoming Week. The lineup generally always consists of two bands—one currently popular and the other a classic staple. This year they’ve picked up another pair of acts that fits this mold: Grand Funk Railroad and Matt & Kim. Grand Funk Railroad are certainly a classic. With a number of hits in the 70s including “We’re an American Band” and “The Loco-Motion,” the band was met with absurd popularity. They sold out arenas across the country, even selling out Shea Stadium faster than The Beatles previously did. After enduring a few decades of breakups and lineup changes, Grand Funk Railroad is back and ready to roll into town.

Co-headliners Matt & Kim started out as a couple of friends in college who decided to date and make music together. Their 2006 self-titled album did okay nationally, but it wasn’t until their sophomore release, Grand (2009), that the duo came to be such a powerful force in indie pop. Their highly percussive songs are loud, emotive and catchy as all hell. Their music has been featured in multiple commercials as well as the television shows Community, Entourage and Skins. They currently reside in Brooklyn, N.Y., and will release their fourth album, Lightning, in early October.

The Uniphonics are an Iowa City staple. Since their formation in 2007 the band has gigged relentlessly around this town and this country, building a rabid fan base and attracting widespread critical acclaim. Imagine someone rapping over a funky jam band and you’ve got The Uniphonics. The live performance is pure energy.  The band takes pride in their DIY attitude, and boast freedom from “the politics involved with being signed to a major label.” Their sole full length, CRAWL was met with positive reviews and features Grammy Award winning trombonist, Robin Eubanks. A sophomore release is on the horizon, and the band is currently playing shows to finance it. It is also worth mentioning that the band will be playing the University’s homecoming parade at 5:30 PM before the Yacht Club show.

Joining The Uniphonics will be Bay Area psych rockers, Antioquia. The Oakland quintet seamlessly blends elements of afro-beat into their meandering psychedelic jams. It is a calculated meander though, and these guys (and one gal) certainly have a vision and an apparent sensibility of their sound. Singer Rachel Antony-Levine leads the group onstage with her powerful voice. This is another band that has been known to put on a uniquely high energy live performance. Since their formation in 2004, they’ve toured the country extensively, hitting the festival circuit hard. They are currently on the road in support of their third full length, Viajero.

Bluebird Diner’s monthly comedy show is back this month with another superb lineup of local and regional comedians.

From the event page:

One of the rising stars on the Iowa City comedy scene, Ethan is clean living comic from Waukegan, Illinois, who grew up idolizing Richard Prior, Red Foxx, Eddie Murphy, Katt Williams, Patrice O’Neal, and Jack Benny. He’s a university of Iowa Student on a full scholarship based on his excellent cornrows.

Arguably Iowa City’s least “P.C.” comic, Jake is a self-described “worthless hack fuck who doesn’t deserve an ounce of your time or attention. But come see him anyway, because if you’re unsatisfied with the show, he might me convinced to jerk you off in the mens room to make up for his lack of talent. Either that, or you could just ask for your money back if he sucks at either one.” Jake Vevera loves you!

Host of the popular television show “Talking With . . .” on PATV, Yale has been doing stand-up comedy ever since his release from prison on an espionage conviction, when he sold the secret formula to McDonald’s “special sauce” to the Soviets in 1989. Their dissatisfaction with it is what led to the fall of the Berlin Wall shortly thereafter.

Caitlin is a Des Moines-based comic who’s gaining attention as one of Iowa’s funniest female comics! She’s performed at venues all across the state, and always impresses crowds both with her comedy and her great rack.

Bruce Jay has spent a lifetime examining the neighbors’ thoughts. He’s so self-hating, why think about himself? Why even go on reading this? The peak of his life came after viewing the movie “Pink Flamingos.” After realizing every object – including furniture, bicycles and toilets – needed to be licked, he calmed down and found the love, nurturing and self-hating stand-up comedy provides.

It’s not often that I promote house shows in the Weekender, but there’s a lot going on here. Here are the essential details: 15+ live performances, homemade pizza, five bucks. The policy here is BYOB and BYO toppings for your pizza. Attendees are encouraged to walk/bike, as parking space will be limited to the performers. Joe Derderian and DJ Suparusty will be spinning tunes all afternoon/night between the following lineup of acts: