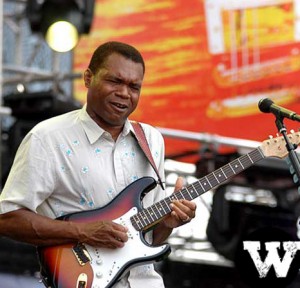 Hello everyone. Welcome back. This weekend brings the annual Iowa Arts Festival – a weekend-long celebration of art, music, food and more. There are more than 125 local and national visual artists involved, a full musical lineup and food from all over the world. It all takes place on the streets of downtown Iowa City. Check out their website for more details and take some time to wander around downtown this weekend. Here’s what else is up:

Robert Cray is a living blues/rock legend. He’s won five Grammy awards and put out 20 multi-platinum records. Cray has toured or otherwise shared the stage with Buddy Guy, Eric Clapton and B.B. King and has recently been inducted into the Blues Hall of Fame. Robert Cray’s exceptional songwriting is backed by his killer guitar skills and backing band.

Denver bluegrass group, Oakhurst released their 5th studio album, Barrel last month and have been touring the U.S. supporting it. It’s their most polished release to date, and if you order an advance ticket, they’ll give you a free download code. In addition to doing the band thing, Oakhurst’s founding members own and operate the Appaloosa Grill venue in downtown Denver.

I feel like I’m writing about Emperors Club and Grand Tetons fairly frequently these days, but rarely are my two favorite local bands on the same bill. Emperors Club is currently competing for a spot at 80/35 and the Tetons are ready to debut some brand new tunes. They will be joined by the once-local-turned-Chicago group, Death Ships. They rule. All schmoozing aside, this show is going to be eclectic and entertaining.

Colorado’s Smooth Money Gesture released their debut album, The Grand Scubian: Evolution last year and boy, have they been busy. Having already hit the midwest twice this year already, they’re planning on returning once more on their way back from the east coast. Led by two brothers, Smooth Money Gesture is a funky, psychedelic jam band to keep an eye on.

As a part of the Iowa Arts Festival, there will be a family friendly production of Janet Burroway’s The Perfect Pig this Saturday. From the Englert website:

Conductor Carey Bostian and the Iowa City Community String Orchestra are excited to present free, family concerts on Saturday June 2 at The Englert Theatre. The thirty-minute concerts will include two works which combine words, music, and art. Composer Philip Wharton has once again teamed up with author Janet Burroway in presenting the new children’s book, The Perfect Pig. In addition, Wharton has orchestrated Heinrich Biber’s Sonata Representativa, and Burroway has created verses which will foster student-created art inspired by the words and music. Penn Elementary students’ artwork will be projected behind the orchestra while the Biber is being performed and the author reads her verses.

Have a super weekend!