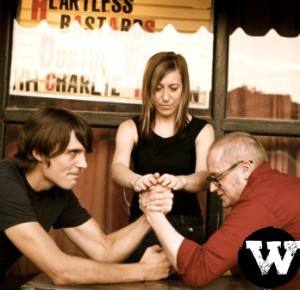 Hello and welcome to another edition of the Weekender. I don’t have much to lead us off with today, so let’s jump right in. I hope everyone’s in good spirits. Here we go!

Ramona & the Swimsuits is the project of Ramona Muse. You might know Ramona from her role in the hyper-quirky Ames pop group, Leslie & the LY’s. If you don’t know, Leslie is known for her gem sweaters and just generally being eccentric. Ramona’s act doesn’t fall too far from the tree “Mother Gem” has nourished over the years. She recently released an EP, Make a Splash and is set to perform all around the state of Iowa this summer. Her songs are short, cute and lighthearted. Pennyhawk and Neon and Nude open. Fellow Leslie & the LY’s band mate, Pennyhawk and Neon and Nude open.

Sierra Leone’s Refugee All Stars formed in 2002 when they were forced to leave their homes during the Sierra Leone Civil War. The group has made a name for themselves over the past decade through a popular documentary about them, critically acclaimed albums and touring the world. They’ve appeared on Oprah and have shared the stage with Aerosmith. I suppose it’s what some might call “world music.” More specifically I’d say “reggae infused African music.” They come with a message and the message is peace!

Cincinnati indie rockers, Heartless Bastards caught the eye of Black Keys drummer, Patrick Carney in 2004. They were subsequently signed to Fat Possum and have since put out three records on the label. Their latest, Arrow was released on Partisan records  on valentines day of this year and was produced by Spoon drummer, Jim Eno. The band has performed on Austin City Limits and their music has been featured numerous times on television show, Friday Night Lights. Front woman, Erika Wennerstrom’s voice is passionate and commanding. Just listen to the video and you’ll know what I mean. Joining Heartless Bastards on tour is These United States, fronted by former UI Student Body President, Jesse Elliott. Madison rock band Little Legend opens the show.