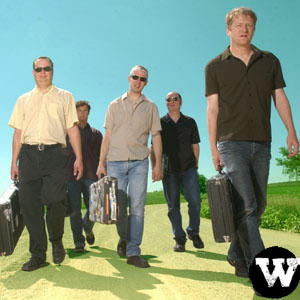 As folks begin to trickle back into town, we’re still working to hit our full cultural stride in 2012. This week’s Weekender is on the short side, but that doesn’t mean you should stay in. It’s all music this week, and it’s all top notch stuff. Let’s dive in.

Here’s a band that is all over the place on a few different levels. Camper Van Beethoven was making quirky, pop-rock tunes long before say, Weezer did. The band does not limit itself to a genre though; many of their songs are rooted in folk music largely through Jonathan Segel’s role on violin.  Oh yeah, they can be a punk band too. Camper Van Beethoven was formed in the early ’80s, disbanded in 1990, took a nearly decade long hiatus, was reborn and continues to tour today. The lineup has changed many times and the band has cycled through over a dozen different members, some of which have worked with Sparklehorse (RIP), Dieselhed, Counting Crows and Cracker. High energy Iowa favorites, Poison Control Center open the show. PCC is putting out a limited copy of their unreleased first effort, A Nice Old-Fashioned Romance With Love Lyrics And Everything, a 30-song rock opera on Maximum Ames records. This release is vinyl only and there are only 150 copies. Expect headstands, splits and melted faces. I’m finding I say this a lot, but I really mean it right now – this won’t be one to miss.

Radio Moscow continues the weekend’s face melting with some heavy psychedelic blues-rock. What started as a solo project by frontman Parker Griggs, quickly became a full band affair personally endorsed by perhaps the biggest rock band in American right now, The Black Keys. These dudes can shred. Hailing from Story City, IA, Radio Moscow has played SXSW a few times and has released three albums in the past four years. Their latest, The Great Escape of Leslie Magnafuzz was released in October, 2011 and they’ve been touring the world to support it. Iowa City band, Brutus & the Psychedelic Explosions open this one.

Saturday will be a night dedicated to the king of rock n’ roll. Here’s the lineup: Delvis, Ben Driscoll & the East Side Motors, The Bent Scepters, Burning Halos, Fried Banana Sandwich, The Sullivan Gang, Jason T. Lewis, Nic Arp, and Valerie Frank. The show benefits the Crisis Center‘s food bank. All proceeds and food donations will be sent in their direction. Come shake your hips and support a good cause at the same time.

I’ll play us out with one of my Elvis favorites. Have a super weekend!