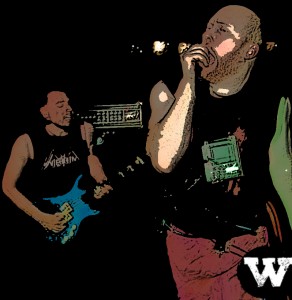 Hey folks. Welcome back to the Weekender. I hope everyone had a fine Valentine’s Day. If yours was uneventful, think of the following events as excuses to ask out that cute guy or gal you’ve been eyeing up. Maybe you already have a special someone, but didn’t quite meet V-day expectations this year. Here is your guide to getting out of the doghouse. Or maybe you can just say “screw Hallmark holidays, I just want to see The Tanks.” Very well. Let’s begin.

Gaelic Storm is perhaps the biggest name in the Celtic music world right now. Their fusion of traditional Irish folk and modern alt-rock has drawn a huge and loyal fan base, largely in the U.S. but extends across the globe. The group began to take its shape in the mid-90s and they continue to pursue their project in full force; according to their website these guys spend over 200 days out of the year on the road and have still managed to crank out eight full length albums. What is especially interesting and admirable about Gaelic Storm is that they’ve pretty much gone 100% DIY. After three releases on a major label (Virgin/EMI), the band dropped out, formed their own label (Lost Again Records) and have released every subsequent album by themselves. From their web page: “Gaelic Storm is a truly self-contained entity; an indie model for the new music industry that knows its identity and audience, and stays in close contact with its fans.”

We got to see Steve Earle in September and we’ll get to see his son, Justin Townes in March for the Mission Creek Festival, but tonight we are graced with the presence of Steve’s sister, Stacy and her husband, Mark. Stacy Earle and Mark Stuart married in 1993 and performed together in her brother’s backing band for a while before splitting off to pursue a musical career with just one another. The adorable duo keeps it simple with songs about life and love while following traditional American folk/blues harmonies and song structures. It  doesn’t get much more authentic than this. Opening the show will be Iowa City’s own singer/songwriter, Tim Krein.

It’s about time for a new Tanks release. Come to think of it, they’ve been overdue for even a live show for quite some time now. Breathe easy, my friends, for The Tanks have a fresh batch of tracks for y’all on Friday. The Tanks might like you to believe that they’re all about screwing around, which may generally be true, but there’s nothing screwy about the musical talents of bassist, Adam Luksetich, drummer, Joe Ross, and presence/lyricism by singer, Kevin Koppes. Fellow local rockers, Jabberjosh and Los Voltage open. A more in depth preview of the show here.

I found myself at Anna Vogelzang’s show at The Mill in October. Having never hear her music before the show, I threw my name into the raffle she was having for her latest album, Canary in a Coal Mine because, why not, right? Well her performance was fantastic and I ended up winning that CD. After making me promise not to pirate it (the album doesn’t even officially release until 2/28), she sent me on my way and it’s been in steady rotation ever since. If that all means nothing to you, consider going to see the Madison-based, Carnegie Mellon-trained songstress because of her eloquently crafted songs that range from incredibly heartfelt to covers of pop songs. And who knows, you might win something along the way. Local solo acts Douglass Kramer Nye and Rachel Marie open.

Chicago’s Archie Powell graduated college with an art degree and was subsequently left jobless and debt-ridden. As it turns out, the angst of being a poor 20-something makes for a good jumping off point when writing a pop-rock record and that’s exactly what he and his band, “The Exports” did. With a superb sensibility for rock song arrangement and lyricism, their tunes are short, witty and polished. One article likens Archie to Elvis Costello, and I can’t say I disagree. With song titles like, “Piggy Bank Blues”, “Loose Change” and “All Tuckered Out” their 2010 debut, Skip Work is an anthem for young folks who might be down on their luck at the moment. Iowa City pop-punk group, Morning Exit open.

Terrence Malick’s 2011 drama, The Tree of Life has garnered some serious critical acclaim, most notably the Palme d’Or at last year’s Cannes Film Festival. The story follows the life of Jack, whose journey leads him to a mission of  reconnecting with his father all while challenging faith and confronting life’s biggest questions. The film is artistic and even a tad experimental at times. Starring Brad Pitt, Sean Penn and Jessica Chastain.

And don’t forget to get down with some college, drinkin’ and women with Asher Roth on Sunday. If that’s your thing, word, but I’ll let you figure out those deets.

Have a good one,