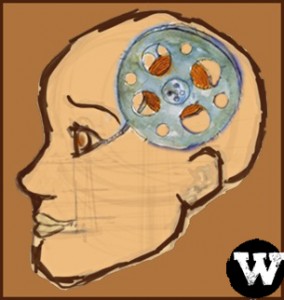 The weekend is nearly upon us and you know what that means: it’s time for another edition of the Iowa City Weekender. As always there’s a lot going on musically around town, but this is an especially exciting weekend for cinema in Iowa City.

The 10th annual Iowa City Documentary Film Festival kicks off tonight and runs through the weekend. The festival focuses on non-fiction films under 30 minutes long and aims to explore the possibilities of documentary as a genre and film as a medium. There are dozens of IC Docs films, readings, installations and other events happening over the course of the next few days, so I must refer you now to their official schedule for more information. Seriously, this is one of the cooler things that happens in Iowa City. Spend a few minutes exploring the website and find something to attend. It’s going to be good. Here’s what else is up:

Briar Rabbit is the brainchild of Philip-Michael Scales, a multi-instrumentalist singer/songwriter from Chicago. The genre is something like soft folk-rock; it’s easy to listen to and lyrically engaging. The band released their first EP, The Company You Keep early last year and have been writing and touring ever since. In February Scales unveiled a new project in honor of Black History Month – an EP entitled The Great Routine which deals with how minstrelsy in the late 1800s prevails in certain parts of modern society. He released each song one by one over the course of the month and eventually made it available for free in exchange for a tweet or Facebook post, which is a brilliant model in my opinion. Briar Rabbit will be joined by fellow Chicagoan songwriter, Dave Tamkin and the beautiful and talented local, Rachel Marie.

Discovered in the mid 1900s by the drummer of The Police’s brother, Paul Thorn has established himself as a comfortable fixture in American music over the past 15 or so years. He has appeared on numerous late night talk shows and toured with Huey Lewis & the News, String, John Prine, Bonnie Raitt, Jeff Beck and many more big names. With around seven releases under his name, Thorn “wanted to take a break from myself,” which is why his next album will consist solely of cover songs performed by him. It’s called What the Hell is Going On? and it’s due out on May 8th. And what good bluesy Americana show at the Mill would be complete without Grand Tetons opening?

This is a free jazz performance put on by the University of Iowa Department of Performing Arts and Johnson County Landmark, the University’s own jazz big band. The theme of this evening is “Where Jazz Meets the Rhythms of the World” and is directed by John Rapson with special guest, Peter Apfelbaum. Apfelbaum is highly regarded in the world of jazz and avant-garde. One of his most well known projects, The Heiroglyphics Ensemble was a 17 piece group that played a string of shows with the Grateful Dead in the early 1990s. Apfelbaum’s current style is fusing world music with experimental jazz.

Pieta Brown is easily one of the biggest names to come out of Iowa City, perhaps just under her father, Greg. If you’ve been living in Iowa City for any amount of time and aren’t familiar with the Browns, you’ve been living under a rock. Fellow songwriter, collaborator and Iowa legend, Bo Ramsey has produced most of her albums and she has shared the stage with the likes of John Prine, Emmylou Harris, Neko Case, Mason Jennings, Calexico and more. Her brand of country/rock is pleasant and her midwestern roots are ever-present. She has received extensive praise from outlets such as the BBC, NPR, The Wall Street Journal and others for her various contributions to great American music. In addition to Pieta, former Iowa City folks, The Pines will open the show. The Pines played with Mason Jennings at the Englert last week and have an awesome new album out.

For those of you not familiar with the Nerdist Podcast, it is a weekly podcast that explores interesting, “nerdy” things and is usually pretty funny. Some of the show’s weekly guests have included Adam Savage (of Mythbusters), Rob Zombie, Ozzy Osbourne, Drew Carey and many of the cast of NBC’s Community. The live show will consist of stand up acts by hosts Chris Hardwick, Jonah Ray and Matt Mira followed by a live taping of the podcast. In addition to Nerdist, Chris Hardwick hosts “Web Soup” on G4, “Talking Dead” on AMC and has appeared on Conan, Jimmy Fallon and Craig Ferguson.

Here’s another name that would be inducted into the Iowa City rock and roll hall of fame, if such an institution existed. Dave Zollo performs his own music with his band, “The Body Electric” as well with other established midwestern acts such as William Elliot Whitmore, Greg Brown, Bo Ramsey and The Pines. Zollo keeps busy. Whether he’s playing in town or across the country, his bio page cites over 200 shows per year and he has released three records on his own label, Trailer Records. Opening up for Dave will be local folk rockers, The Jesse White Band.