I meet Loren Southwick at the Ryerson’s Woods parking lot. We shake hands, and I hop into a black pickup. Southwick, a retired contractor and engineer who currently lives in Missouri, owns four properties about a mile away, just south of Iowa City limits on the Camino Del Rio, a secluded road that traces the Iowa River.

We head south, turn left on Izaak Walton Road and go straight onto a narrow gravel lane bordered by trees and shrubs. We roll a little further until Southwick stops the truck and points out the passenger window. 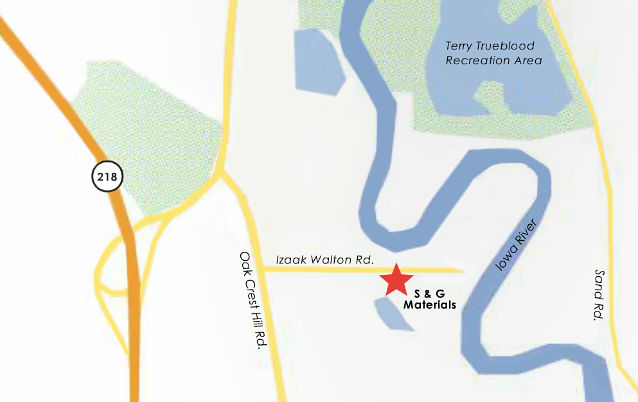 “You see them over there on the horizon?” he asks.

I can’t. I squint, but I only see leaves.

We creep forward a few inches. Then, through a gap framed by foliage, they appear: short, gray mountains. Stockpiled sand, owned and operated by a mining company called S&G Materials.

“That’s where they are,” Southwick says. “Right in the middle of the floodway.”

Southwick has with him a clipboard thick with printed-out emails, sloppy hand-written notes, phone numbers and typed letters. There’s one addressed to Senator Bolkom, one from Senator Dave Loebsack, one to the U.S. Army Corps of Engineers, several to the Johnson County Planning and Zoning Administrator and numerous back-and-forths with the Iowa Department of Natural Resources (DNR).

Shuffling through the pages, he finds a tiny map printed from the FEMA website and points to a shaded area.

“That’s where they are,” Southwick says. “Right in the middle of the floodway.”

And he’s been worried about it now for two years.

As a participant of the National Flood Insurance Program, Johnson County has its own floodplain management ordinance that is required to meet FEMA’s minimum standards. It states: “No use shall be permitted in the floodway that would result in any increase in the 100-year flood level.”

Bill Cappuccio, the DNR’s State National Flood Insurance Program Coordinator, explained. “The idea of the floodway is the area we want to leave unobstructed,” he said. “So any development that results in the obstruction of flood flows is usually going to be a problem in the floodway.”

Such development could include not just buildings, but also waste, storage, fill—even sand deposits. The restriction is meant to minimize damage.

According to Julie Tallman, Iowa City’s Development Regulations Specialist, developing in a floodway is very uncommon—partly because there are so many limitations, and partly because it’s not attractive to many industries. The risk of flooding is too great.

Things like parks, golf courses and farmland are usually acceptable. But before doing anything at all, developers must provide proof from an engineer—often in the form of a “no-rise” certificate—that activities in the floodway won’t raise flood elevations.

“I’ve seen the DNR deny permits for somebody to put a boat dock in the Iowa River,” Tallman said, “because they couldn’t provide a ‘no-rise’ certificate.”

S&G mines sand and gravel and supplies construction materials like “concrete sand, mason sand, river rock, black dirt, recycled concrete products and asphalt millings,” according to its website. It’s hard to see what the company does from the ground, since it’s tucked away on a private road, but the photos Southwick took from his plane give a better picture. Large cone-shaped hills dot the land, mechanical arms suspended over their peaks, spent quarries-turned-lakes all around.

In the early 2000s, S&G originally stockpiled materials within the floodplain. Later on, though, the company migrated east into 16.68 acres of the floodway — a move that, in theory, first requires an engineer’s hydraulic analysis.

Southwick has been hunting for this document, but he’s turned up nothing. Cappuccio said the DNR is unaware of any such study.

Even so, S&G has expanded its operations with approval from Iowa City and Johnson County Planning and Zoning Commissions: the company received a temporary conditional use permit for concrete processing in 2010, and in order to continue these operations on a permanent basis, the land was rezoned from Agricultural to Light Industrial in 2013.

Meanwhile, Southwick continues sending emails and making phone calls. He’s not only concerned about the stockpiled sand and gravel less than a mile from his properties, but S&G’s other alleged activities, like raising the road, blocking off a stream that once connected to the Iowa River, and constructing a dike around the operations—all of which Southwick claims are illegal.

It’s difficult to know what direct effect S&G’s activities have had on the area. Last year, when Southwick couldn’t access his homes because the road flooded, was S&G responsible?

“If you’re going to put me in the bottom of a pond, which is in effect what they’re doing, now we’re in trouble,” Southwick said. “One inch can cost you tens of thousands of dollars.”

So far, though, his complaints have yielded few results.

“I wrote every Board of Supervisors individually and not a one of them responded,” he said.

But with so many agencies involved in floodplain management, whose responsibility is it, really, to ensure floodway regulations are being followed? FEMA? The U.S. Army Corps of Engineers? The DNR? Johnson County? Iowa City?

According to Rick Dvorak, the Johnson County Planning and Zoning Administrator in charge of enforcing the county’s floodplain ordinance, the company initially contended that the land, though surrounded by floodway, could be developed because its elevation was higher than the 100-year flood level. Dvorak took their word for it. But now, he’s “putting the burden” on S&G to verify that the land’s original elevation met Johnson County’s requirements in the first place.

It wasn’t long ago that Dvorak dealt with a similar situation. In 2013, around the same time Southwick sent his first complaint, Iowa City-based companies Streb Construction and Maxwell Construction placed a 10- to 15-foot-tall dirt pile in the floodway—seemingly the same thing S&G is doing now. The DNR inspected the site, accompanied by Dvorak, and sent a Letter of Non-Compliance to the companies.

The DNR will make a Community Assistance Visit to Johnson County in late July, Dvorak said.

The visit, made on behalf of FEMA, “serves the dual purpose of providing technical assistance to the community and assuring that the community is adequately enforcing its floodplain management regulations,” according to FEMA’s website. It generally involves reviewing development in the floodplain and floodway, inspecting documents and permits, and meeting with officials.

If Johnson County is found to be noncompliant with its floodplain management regulations, it could result in a yearlong probation period to correct violations or administrative problems. In the worst-case scenario, if problems still remain, the county could be suspended from the National Flood Insurance Program. This would render the county ineligible to purchase flood insurance from the government, making flood recovery an even greater struggle for property owners.

“Anybody who has flood insurance, their policy will expire,” Cappuccio said. “It basically won’t be renewed.”

But that’s just one reason to ensure regulations are followed, he said.

“The regulations are intended to lessen the effects of floods on people and their properties.”

If Johnson County is found to be noncompliant with regulations and fails to correct violations or administrative problems, the result could be probation or even suspension from the National Flood Insurance Program. This would render the county ineligible to purchase flood insurance from the government, making flood recovery an even greater struggle for property owners.