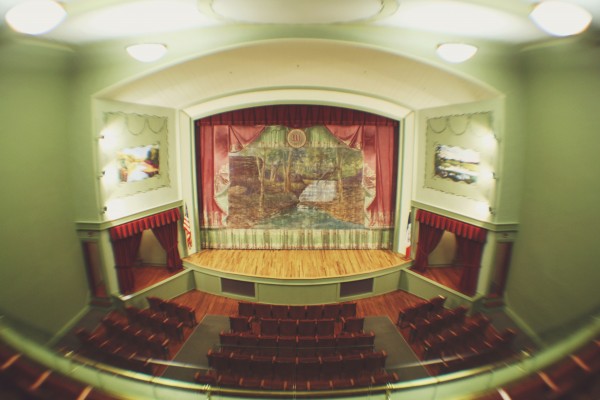 Iowa was a lonely place not that long ago. The 19th century saw its quiet prairie oceans replaced with cultivated fields as diligent settlers traipsed westward across the continent. Railroad companies would soon lay down steel tracks across the state, ushering in new waves of settlers looking to call Iowa their home. Farmers’ loneliness would subside as more and more culture seeped into the little communities of Iowa.

By the latter part of the 1800s, a New York theater troupe could hop the rail to bring big city escapades (and questionable morals) to the sturdy Iowa farm towns. This collision of attitudes was often reconciled in the opera house. The nomenclature lent an air of appropriateness to upright communities that prided themselves on their strong moral foundations, and the “opera house” became a place where theater troupes–considered by some to be nothing more than roaming bands of ne’er-do-wells–could legitimately ply their craft.

Along with Knutson, musicians Dustin Busch, Pete Becker, Ken Moehn, Daren & Molly Mathews (Thankful Dirt), Dave Moore, John Waite and Jordan Sellergren are all working to make this project a success. The first show of this summer will take place at 7:00 p.m. on Friday, June 8 at the Wieting Theater in Toledo. 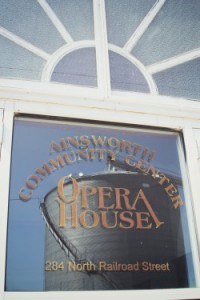 Ainsworth Opera House
When Sharon Gillis, Raquel “Rocky” Roberts, Anita Davis and Michael Zahs formed the group Ainsworth Community Together (ACT) to purchase and renovate the Ainsworth Opera House in 1988, the building was literally exposed to the elements. They showed us photographs documenting their work, and Roberts chuckled that to watch a movie in the theatre prior to the renovation would have required an umbrella.

Within the walls of this former feed store lies evidence of the Ainsworth Opera House’s importance to its community. Names, drawings and scribbles once covered the walls, many of which were farewells from the sons of the community left before going to war. Part of the building’s magic lies in the preservation work of Zahs, who owns an incredibly rare collection of films originally shown annually at the opera house as part of the Brinton Film Festival. He shares these features, including a collection of around 500 “magic lantern” slides, on regular occasions. Some of the films are reproductions made when he had the portions of the collection examined by the National Archive, which only reproduces films when there are no other known copies.

The Wieting Opera House
The Wieting Opera House was built in 1912 (the same year as Iowa City’s Englert Theatre, which is also celebrating its centennial this year) by Ella Wieting. It was built in memory of her husband Dr. Philip Wieting and its doors have been open almost every year since. One of the most striking features of the theater is the vintage stage curtain. Crafted in the Twin Cities, the curtain matches paint colors from the period and depicts a river scene, perhaps inspired by Ella Wieting’s time in New York. A lot has changed in the theatre, including new seats, updated electrical work and a digital projection system, but our host Jim Roan was quick to point out the original wood floors throughout the theater, now as pristine and luxurious as they were in 1912. 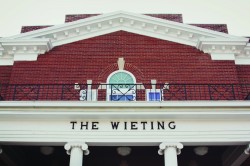 The building was listed on the National Register of Historic Places in 1979, with efforts to fundraise for restoration beginning in 2008. The majority of the 1.3 million dollars invested in the project has come from various grants provided by state and municipal entities. Emmy-winning actor Michael Emerson (a Toledo native perhaps best known for his role as Benjamin Linus on Lost) is a veteran of the Wieting and lent his name to support the renovation efforts. In a 2009 letter of support he wrote, “There is no building in my hometown that looms larger in my memory than the Wieting … I count myself lucky to have grown up in a town that could boast a true old-school performance hall.” And performance hall it was: In the last century, the Wieting’s stage has seen the likes of traveling minstrel and medicine shows, lyceum courses, school plays, graduations and political events. On July 1, contributors to the efforts will help celebrate the centennial of the theater. Perhaps even the ghost of Ella Wieting, whose presence in the theater has occasionally been noted, will be in attendance for the celebration.

Placing musicians in these opera houses touches upon a reality we have all heard of but rarely experienced. We instinctively seek to participate in a tradition that helped form the identities of our grandparents, and this is what the Iowa Opera House Project represents: acknowledging a particular way of life.

It is also about celebrating community by involving the community. Much like the rugged forebears who brought culture to the prairie, the Iowa Opera House Project has not wept over what has been left behind; rather, it makes use of the great abundance before us.

Ryan Prochaska, townie, has worked as a professional preservationist for the National Park Service, provided scientific support in Antarctica to the National Science Foundation and NASA and has helped preserve and renovate homes around the Iowa City area for the last two decades.