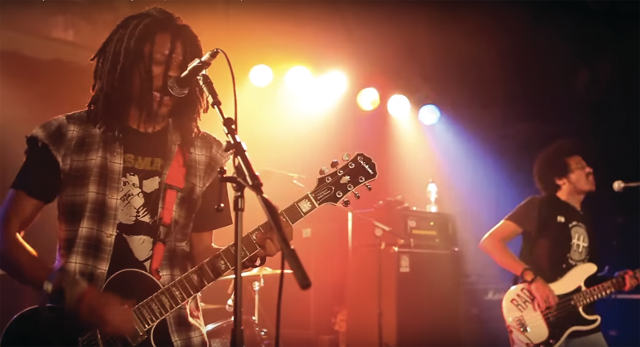 The debut album from Radkey, Dark Black Makeup, is a punk rock family portrait. Brothers Dee (22, lead vocals and guitar), Isaiah (20, bass and vocals) and Solomon (18, drums) Radke exhibit their brotherly love through tight, high-energy tracks from start to finish. The brothers like to give credit for their musical chops to their Dad/Manager’s record collection. Regardless of what’s in their fathers collection, what’s clear is that rock is in their DNA. These homeschooled brothers from St. Joseph, Missouri share their knowledge of musical roots, history and their influences in fresh, full frontal riffs and tones in this debut LP. Recorded with producer Ross Orton of Arctic Monkeys acclaim (across two studios in San Francisco and Sheffield, England), Radkey released Dark Black Makeup on their own label, Little Man, earlier this year.

This family collaboration embodies years of dedication, touring and a true connection to what really fuels the band: their fans. We spoke with middle brother and bass player Isaiah before back-to-back shows on the first day of their current tour.

Little Village: The beginning is a pretty good place to start, and your parents sound amazing from what I’ve heard. How long have your parents been together?

Do you think any of those monogamous traits fuel your own relationships or does it skip a generation?

I don’t know. I guess so, yeah. It’s definitely cool you can do it like that. I have a lot of respect for people who are able keep it going.

How did the homeschooling come about?

Well, they just kind of decided to make that the way they raised us, which was cool. It helped the relationship between me Sol and Dee.

Was music part of your homeschool curriculum?

No, but my Dad’s record collection was around, and we were allowed to listen to that whenever we wanted, which was a lot. We would do that instead of play video games.

How did you choose your instruments?

Dee was a drummer at first. Then he started playing guitar, and I was going to be a guitarist, but Dee was doing too good guitar, so I decided to stop. I was done being a musician for a long time, and then Dee used my bass to be in a cover band for a little bit. Afterwards, I said, “I want to play my bass so let’s start a band.” Sol said he’d be the drummer, and we were like, “yeah, right,” and here we are.

Sol’s first song is up online now and its great. Is writing music collaborative for you? What is you’re writing process?

It’s collaborative. There’s a lot of different things that go into it. Sometimes, I’ll have a melody or Dee will have a riff, or it’s just a jam. Sol had been working on that song for a long time, though.

Are you conscious of your audience when you write?

Yeah, basically when we are writing songs we want to make sure it’s a song that will go well live, otherwise it just doesn’t make it. Basically, is this a song that everyone can party to and sing with? It’s not the only way we write, but we want our fans to be way into it.

Are there any surprises in your fan base?

Yeah, definitely. They’re definitely the coolest. Every one of our fans is into sweet music and we got really good support. We got a good type of fan base to support us and follow us through our career and not be fuckin assholes about shit.

In a lot of articles about you guys, people qualify the kind of music you play by adding the word black in front of it. Do you feel the responsibility to talk about race in music?

Well, it’s interesting. We are never annoyed by stuff like that because it is pretty weird. There aren’t a lot of all-black rock bands out there. So it’s a legit question. We don’t think of it as “black rock” or anything. We just do it.

How did you end up recording in England?

Well, we did our first session in San Francisco with our dude Ross Orton, and he’s from Sheffield, so we did that. And afterwards, we went to his spot. So, we went to Mccall Sound Studio in Sheffield and we spent two weeks recording. We didn’t take any days off because it was so fun, and everyday kind of felt like a day off anyway.

How did being in the studio effect your process?

It was really cool. In San Francisco, working with Ross, we figured out new ways to write songs. It was a really good experimental place. We discovered we can do more than really fast shit. The studio was just really cool. It was a wild experience recording a full length, because the EPs were so rushed, and we could spend a good amount of time on this album.

Do you see a lot of differences between the European and U.S. music scenes?

Definitely. It definitely seems like the UK and Europe dig American rock music a lot more. Anytime you hear a band, it seems like they get it here first. People like what they like and are not forced to like it; they’ll get into a new band where, in America, people are like, “whatever,” until they’ve read about it later.

With this heavy tour schedule, do you find you are developing any pre show rituals?

Besides eating gummy bears, that’s pretty much it.