In May, McSweeney’s press published the poetry collection Tradition by Daniel Khalastchi, a graduate of the Iowa Writers’ Workshop and the current associate director of the University of Iowa’s Frank N. Magid Center for Undergraduate Writing. In a format similar to Khalastchi’s previous collection Manoleria, the poems of Tradition feature an unnamed narrator navigating a world that is as dark as it is absurd, while the role and reach of tradition are depicted with respect to both personal and religious identity, as well as to poetry itself.

A series of poems in Tradition feature a conversion rabbi guiding a narrator through various practices of Judaism, usually depicted with the rabbi behaving in a bizarre and sometimes seedy fashion. A central theme of these poems seems to be a sense of disappointment in the anachronistic nature of religious traditions. Would you agree?

I certainly would. While the book focuses its attention on the observances and customs connected with the Jewish faith, my hope is that the collection as a whole pushes forward the idea that holding on too tightly to any single set of beliefs for the sake of tradition can actually end up being detrimental to the very family/relationship/community it’s trying to keep in tact.

I don’t have anything against organized religion, but it’s always struck me as troublesome when people are raised with the understanding that those who don’t subscribe to a particular ideology must be living incorrectly; when acceptance of others is based on things like familial lineage or what dietary/sexual/hygienic “laws” you follow rather than on the content of your own character, we are encouraging stereotypes, segregating the population and asking for trouble.

I was curious why the rabbi in these poems is a conversion rabbi. Does this reflect a distance on your part from the religious practice of Judaism, as opposed to the cultural identity?

When I first started writing these poems, I was at a point in my life where the idea of marrying someone outside the faith was becoming a real possibility. While this didn’t bother me personally, it was clearly something that impacted my family (parents, siblings, grandparents, etc.) and caused a strain on certain relationships. According to Jewish law, a person is only considered a Jew if they are born to a Jewish mother or if they convert (which is, as it turns out, a pretty involved process).

As I began thinking more critically about what religion and cultural identity meant to me, I became fascinated by the idea of a character who could embody the various pressures I was feeling from the people around me while also shining a light on the arcane aspects of a belief system that seemed full of empty traditions. While I myself am still a practicing Jew (and one that identifies strongly as such), I’m also a questioning one.

The character of the conversion rabbi gave me a chance to explore my own misgivings about the Jewish faith, and my hope is that readers of Tradition will relate to the thoughts/concerns/predicaments raised in the book regardless of what background(s) they come from or what religion(s) and culture(s) they identify with. 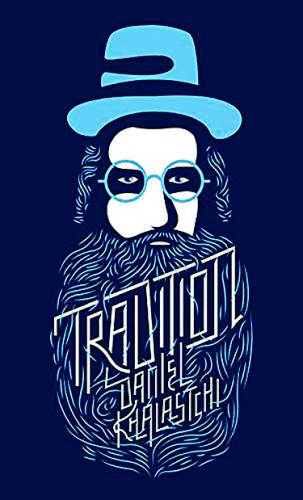 The poems on both religion and romantic relationships in Tradition feature several absurdist elements—fantastical depictions, non sequiturs, shifts into seemingly irrelevant minutiae. Grounding the poems with absurd features seems to create a mood of distance and ambiguity around topics that are otherwise laden with a sense of emotional gravity. Does creating that distance allow you to express yourself more authentically?

I think that’s partly the case. Writing about big subjects like religion and failed relationships can fall pretty quickly into the hard-to-climb-out-of cliché swamp if you’re not careful. Because I knew I wanted to explore large thematic ideas that have been discussed by many other writers/artists/scholars, I needed to find a fresh way of approaching a relatively stale conversation.

For me, the absurdity and humor in these poems is less about creating distance for the sake of authentication or ease of expression, and more about illustrating the concept of avoidance. If you’ve never tried it, talking to your family or significant other about theology and the merits/irrationality of following any kind of religious doctrine can be quite difficult. Sometimes when I’m in those situations, all I want to do is change the subject, make a joke or pretend (for a few minutes at least) that I’m in a grocery store buying bananas rather than at my parents’ dining room table telling the people who raised me that I’m throwing their traditions out with last week’s brisket.

Could you elaborate on the role that dialogue plays in the poems of Tradition?

For this particular book, I was interested in providing strong narrative elements (fleshed out characters, detailed settings and scenes, etc.) as a way of counterbalancing some of the more surreal/grotesque/topically sensitive material that pops up throughout the manuscript. As I began drafting the poems, I found myself drawn to the idea of dialogue, and I made a concerted effort to explore that further.

I think I fell into using dialogue because I was reading so much fiction at the time; I was (and remain) captivated by writers like Leonard Michaels and Roberto Bolaño, and I think dialogue began to feel like the best way to share intimate conversations between characters while also bringing imagined voices to life.

Dialogue allows a reader to feel like they are part of the scene, like they are in the proverbial sound studio as the band cuts the record. For me, more so than any other aspect of the craft, dialogue is the most actively engaging tool a writer has at their disposal. As a poet, it wasn’t something I had explored much in the past; now I worry I’ll never give it up.

In “Poems for My Father,” you describe your father’s escape from Iraq in 1970. Do you feel being only one generation removed from religious persecution affects your sense of Jewish identity significantly?

Most definitely. When thinking of the profound ways my father was made to suffer because of his religious beliefs—forced to leave his family, to give up his homeland, to risk his life so that he could escape severe torment and tyranny—I become acutely aware of just how easy my own life has been. The knowledge of his history makes turning away from/questioning/challenging the traditions he suffered to uphold incredibly difficult, and (if we’re being honest) painful.

Being only one generation removed from that type of persecution is always present in my mind; I am thankful to the people who helped my father escape Iraq, and I am grateful to the state of Israel for providing him and his family the opportunity to live freely and without fear. Regardless of how observant I am, or who I marry, or what I do/don’t eat when no one’s looking, I will always identify as Jewish, and I am immensely proud to be the son of a man who fought so hard for the right to think and live as he sees fit.