In the late fall of 2005 I had just started working at New Pioneer Co-op in Coralville. One afternoon at a local Indian buffet, I was discussing my newfound and still shaky employment with an acquaintance. She reassuringly told me she had done “a few good years” at the co-op. These were kind words for a young adult who had no idea where life would go, and little did I know then my own few good years would have me meet not only my future wife and a host of oddball characters, but also one of my favorite human beings: John Hopkins. If you knew John, and many knew him better than me, you have at least one, but more likely a catalog of great stories to tell. Here’s one of mine.

After working together for a few months we would occasionally carpool to or from work, talking trash about coworkers, listening to the radio, what people do. On a winter afternoon John was giving me a ride home from work in an old car — a late-’60s Plymouth Valiant, I believe — and we chugged to a stop at the intersection of Highway 6 and First Avenue, out of gas. John just looked at me and said, “I thought I had enough to make it.”

The afternoon traffic puffed and swerved past in the busy intersection, and it had just started snowing a bit. As we got out to start pushing, another car pulled up beside us and someone yelled from the window, “Hey Hopkins, need a hand?” John was, of course, recognizable from about a mile away, and I already knew he possessed the disarming ability to talk to almost anyone as if he had known them for a lifetime, but discovered on that afternoon he also had no problem picking up a suspended friendship in the middle of a highway.

The guy in the other car was a former coworker of his from Mickey’s, years prior. He didn’t hesitate for one second to help us push the Valiant into a nearby parking lot and ferry John to a gas station. Waiting for them to return, I stood in the flurries smoking cigarettes and marveling at our luck. But I realized much later it wasn’t luck at all, just the sort of auspicious thing that happened when you were around John long enough. 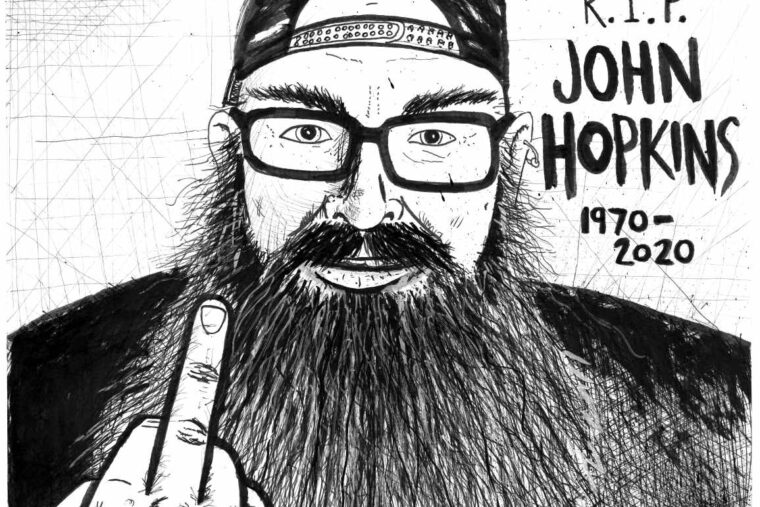 Years passed. After Melissa and I left the co-op and moved to Tennessee, John too left to follow a new path, sound-checking and metal-clawing literally around the world. Whenever he would come through Nashville on a tour we would make it a point to get together for a scant few afternoon hours to eat hot chicken, shop for records, have him hold the baby or just sit and chat as if no time at all had gone by. I have no doubt that as he drove around the world for the better part of the past decade he met and bonded with an uncountable number of fortunate people. Each one of them has a John story they tell regularly. I am certain of that.

So whether your story about John is something preposterous that happened at Gabe’s one night, or thrashing on a stage somewhere, or crossing the Canadian Rockies by van, or pushing a Plymouth through a busy intersection, remember that what sometimes begins as a few good years with a coworker can stretch out into a lifetime of memories. It’s impossible to know when it changes from one to the other, and you never know when it will end.

This article was originally published in Little Village issue 289.