After finishing a close third in the Iowa presidential caucuses less than eight years ago, it’s understandable that former first lady, lapsed New York senator, ex-secretary of state, and new grandmother Hillary Rodham Clinton might be cool on campaigning in Iowa.

She arrived in Cedar Rapids Wednesday to stump for senate candidate Bruce Braley, and if this reporter had been allowed within earshot of Clinton, she’d hear this question: “If you choose not to run, who do you hope will win?” 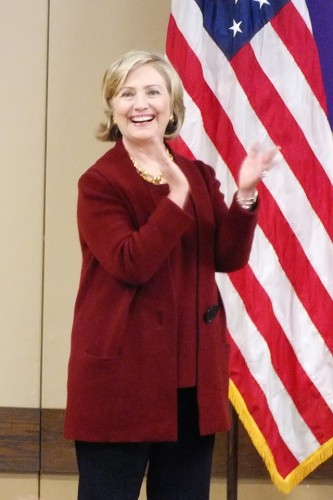 Clinton is unbeaten in any poll until, on paper, she’d face Mitt Romney, who also hasn’t officially entered the presidential race (on the Republican side).

Who would she pick? That question will have to wait, because on Wednesday in Cedar Rapids, Clinton only had words for Braley. She also had a few words for his opponent, Joni Ernst, as well — just less positive.

“I have concluded that Iowans take politics really seriously, and that may be an understatement, but I think it’s because you take public service seriously,” she said. “You have a lot to be proud of in this state. You test your candidates. You actually force them to be the best they can be. And they have to be willing to answer the tough questions which Bruce has been willing to do and his opponent has not. It truly seems like it should be disqualifying in Iowa, of all states, to avoid answering questions.”

In his introduction, Braley gave a shout out to his mother, a retired teacher who still substitutes in schools, and talked about how he compares to Joni Ernst on higher education: 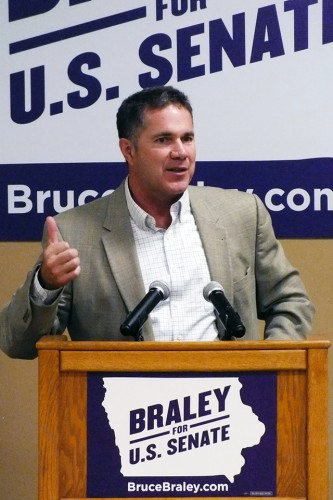 “That means you’re going to pay tens of thousands of dollars more just on interest over the life of your loan,” he said. “That doesn’t seem like a plan to make college more affordable. That’s why I fought, with Senator Clinton at the time, to make sure that we increase access to Pell Grants, we cut the interest rate on student loans in half and we’ve worked hard to preserve tax credits and tax deductions for college tuition.”

The crowd of 400 sang “Happy Birthday” to him (his birthday is Oct. 30, Clinton’s is Oct. 26). More than a dozen press outlets were on hand for the event, including a television crew from Japan.

Braley is trailing Joni Ernst in many polls and has called out the big dogs to retake his lead. He was with Vice-President Joe Biden in Davenport on Monday and will host Bill Clinton on Saturday in Cedar Falls at his Bruce, Blues and BBQ event.

For Hillary, the next big question comes after Nov. 4, when will she be back in Iowa and whose candidacy will she be promoting?