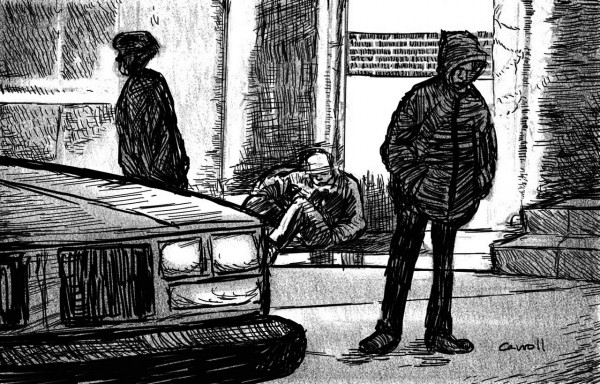 I wheel for the curb to snatch a flag at the Deadwood, a shivery black dude waving twenties overhead, international sign for “Avoid Me.” I also see too late a barmaid putting him to the curb, hearing her fume when he opens the door, “—or I will kick your ass myself!”

“Take me to Friendship,” he says, meaning the street.

Dude wears a ball cap that reads Hustler in an urban script and he shivers for real but not because he’s cold. Hustler’s age is tough to judge, 40 or pushing 60, and he has trouble spitting out words over grinding teeth. Either he’s hepped up on goofballs, he’s futs, or he’s both.

As if hearing my thoughts, Hustler pounds the dashboard piano, crooning, “That’s right!”

Out on Friendship St, at a house still decorated for Xmas, I pull in the drive when he tells me to wait a minute. I need collateral before he leaves the taxi and Hustler hands me a fifty.

Off the bat he’s not wanted inside. Everybody jumps up and waves their arms. I can make out this action by the shadows thrown on the venetians and through the street-peeper cut in the blades. Door opens, door slams. Ten minutes he’s in there going on fifteen and I hear shouting. Somebody crashes the venetians down so I can see the full set where two men hold a woman back from attacking Hustler. Now the door swings wide and he is put out in the cold.

He hollers back at them, “I love you, bitches!”

Dumping in front beside me, he says, “Coralville,” croaking like it’s a trip to the dentist, “Big Ten Inn, in the back.”
As we drive across town, the conversations he entertains are not with me or his cell phone but with commercials on the pleasure radio. When my business radio pipes up, he argues with it. Hustler is cracked out.

The snow piles on the windshield, the wiper arms wand it away. Every motel door shows worn and battered, every lot parked with cars that look like they’ve been lived in. I blow through half my cigarettes waiting for Hustler to conduct his business but at 75-cents per minute he is paying for a week of tobacco.

When Hustler returns, I guess our next landing: “Capri Lodge?”

He pop-locks in his seat and cuts his eyes on me.

“How you come to know all that, chuh? Motherfucker, how you know the Capri or’d that bitch tell I was coming?”

“We’re out of shitty motels, I was deducing.”

“I’m saying it was a good guess,” now imploring, which isn’t my style, so I downshift: “Are we going to the Capri, or what?”

“I ought to. But for real, my brother: Did that bitch call on you?”

“Absofuckinglutely. Serious as a heart attack.”

“What about the Capri?”

Hustler crimps his eyes as he forks over two more fifties.

“I might maybe love that bitch but we got to hit the C.R.”

This kind of ride is what we cab drivers refer to as a Vision Quest, a truly American pastime, the endlessly elaborating journey forward possessed by a moment already past, propelled by needs of fate and circumstance, and whatever the cost-who gives a shit.

Crossing over the threshold of burning cheese that announces Cedar Rapids, Hustler directs me to stop at the Econo Lodge on 33rd Ave, and then to two neighborhood cribs. Spending a few minutes in each, he won’t or can’t tell me where to go between stops without pointing us seven ways across the Southwest Area.

“Take a right—here? No, left! Is it here? Motherfucker, I’m asking you!”

“I am only the operator of this spaceship and not its captain.”

“You done fuck up, we should’ve gone that other way.”

His fare totals $158 when we end up at a gas station in a hard luck corner. Shivering in skirts and heels, two hooker penguins stare at us and it’s hard to tell if the station is closed for good or just the night.

Hustler asks: “You got a pistol?”

“Wait for me,” he says. “I’m just tipping around back. Keep yr fish skinned for five-oh.”

Soon as Hustler sneaks behind the station, I come off the brakes and squeal for the road. In my rearview, his silhouette comes running after the taxi, his arms waving overhead. Then behind him, a burst of cherry lights and the cry of a squad car.

Keeping foot to go-pedal, I deduce the cop is not interested in me. I would later learn it was a Johnson County deputy that discreetly tailed our three-hour tour of Coralville and illustrious Southwest Area. Hustler had violated a no-contact order way back on Friendship St and officers apparently wanted to see where else he would stop before catching up with him. Like everybody else in Hustler’s life, I punted him to another party. But what other play did I have?

“You done fuck up,” I cackle at the rearview. “We should’ve gone that other way!”

That other way, alas, whatever it was might have featured less toil and suffering for any of us. Driving blind into the star field of falling snow without care or purpose beyond my hunger and purse to move me, I consider the matter unhappily.

Vic Pasternak lives in a riverside shack where he works on cars, repairs chainsaws and builds clocks.