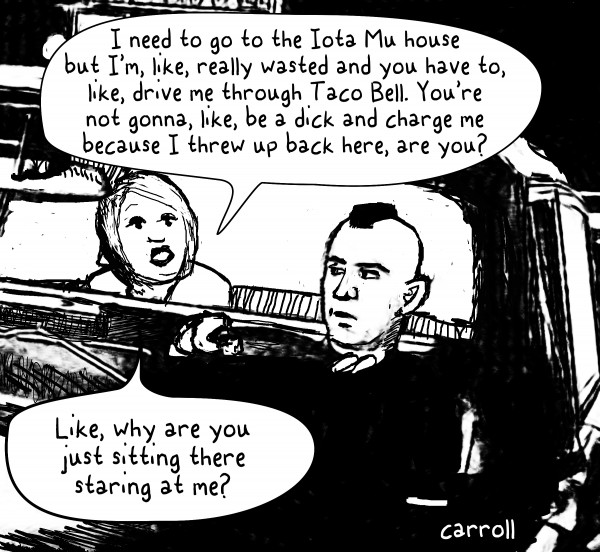 Rough night: There’s a raunchy fête at one of the meet markets and ladies too young wander the streets boudoir-style looking like they’ve just emerged from Victoria’s Secret, wolf packs of skinny bitches high on cocaine.

Meanwhile, one Ultimate Fighting championship or another is being broadcast at BWW. From corner to corner, ginned-up boys slug it out and/or drool at coeds peeled of their outerwear.

Not that I harbor any ill-will toward skinny bitches high on cocaine, or the dudes that make money off the other dudes following the wolves around like dogs. But SBHOCs usually want to pay me with a flash of their breasts.

“I know drivers who’d totally give me a discount for showing him these.”

Perhaps she means the driver who seconds as a “modeling agent.”

“I’m not that guy,” I tell her. “That guy is a creep and scumbag, and he don’t work here. The fare is seven bucks—cough it up.”

Says she to her gal pal: “I’m showing my tits and he won’t give us a break?” Time for an extra-strength application of the #202.

“You want to pay with your mams? Then lop one off and pass it up here, I’m getting hungry.”

“O.M.G.” clucks the gal pal and the other snaps bra over breasts like snatching something back from a thief. She glares at me in the rearview.

Like I said: Rough night. I’m seven hours into my twelve and out of thirty calls I’ve made just $20 in tips. Do the math: My attitude sucks.

Grinding out of the Sheraton circle without mowing anyone down, I find a happy couple making out at the corner. They amorously stumble into the road and I slide to a halt. Like it’s all part of the show, dude lifts girl’s butt onto my hood and they go on mashing face. Blasting my horn gets their attention and the girl swings a lazy arm overhead, “Hey taxi!”

They climb in back and dude says: “Seville Apartments. Take a right here.”

“I know where it’s at, keep your shirt on. And hers too.”

I hate springtime. Everybody shifts into caveman or -woman mode, pricked electrically at the deep root of our animal brain until we go dumb as rabbits. What would our mothers say? Behind me, the happy young couple can’t keep their hands off each other.

We’re stopped on the red light at Madison so I take a look and see one gleaming and enormous white breast slung over the shoulder of my seat.

“This ride is cash only.”

“Feel it,” demanding, “They’re totally fake, both of them. Feel my fake titty.”

Well, no shit? Having never felt a fake, the scientist in me jumps the ethical fence and cops a feel. “Feels reals—but it’s still cash only.”
We’re crossing the river a hundred yards later when I tell them no sex.

“What do you mean we can’t have sex in here?” Dude adds: “I’ll give you like twenty bucks.”

“No sex in the taxi-cab. Like I says, keep your shirts on.”

That’s twice tonight and I can smell the trend, like catching whiff of the jack arcade at Romantix. I drop them at Seville and dude ponies up the fare as the girl with the fakes reminds him to tip me, remarkably.

Dude passes me a dime bag that I hold up in the dome light. Inside: Two plain white pills. “Where’d you get these?”

On that note—and from somewhere deep in my own animal brain—I call the young lady with the fakes back to my window. She wobbles over and I give her my card, telling her, “In case things get hinky in there.”

She’s all laughs and charm, drunk and blushless.

“Things’re getting hinky, all right. He’s going to fuck me in the butt!”

There are times when I wish I carried a vat of sanitizer in the trunk, or that I could drive from inside a biological safety cabinet. Or maybe I could altogether quit myself of this racket and go pound keys for ACT. Alas, if only I could type.

Dispatch barks me back downtown to the Blue Ramp where I scoop up a grumpy but appropriately dressed lesbian couple going back west. Without thinking about it, and bypassing Burlington, I zip into the T-Bowl alley.

But it’s bar rush, Vic, you dumbass: Soon as I hit the bricks of the Pedmall, revelers swarm both sides of the taxi like the Walking Dead. I creep through the crowd at a baby’s pace as half-naked coked-up swine jump the hood and pound the roof and slap glass.

I check the rearview and see my fares have huddled closer together, away from the windows. They are horrified I am willing to drive with maniacs hanging off my car. They wouldn’t be so appalled if this were the Apocalypse, of course. And who’s to say that it isn’t?“Is it always like this?”

“Skinny bitches high on cocaine,” says the other woman. “They think they run this town.”

An hour later, the pills have disappeared Alice-style and my ringing cell phone sounds like it’s underwater. Girl with the fakes on the other end. So back to Seville where I find her sitting on the curb, bawling. Aw, rough night. But everything is softer now and I play nice.

“You and your beau get into it?”

So I roll downtown and she keeps up the tears like a spring storm.

“It’s alright, I’ve done that, nobody killed anybody,” I say to her.

“These are his, he’s paid for them, oh god! We haven’t even been married a whole year!”

In the rearview I see her clutching hands over her chest. My hands turn the wheel steady and the road feels like it is made of glass.

Vic Pasternak lives in a riverside shack where he works on cars, repairs chainsaws and builds clocks.