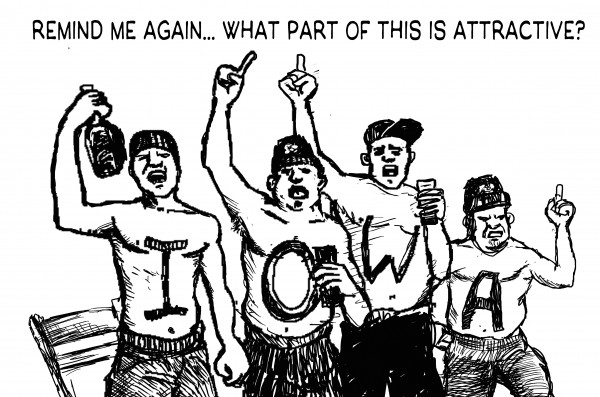 Standing on the West Bank corner, a shirtless man wears a bib of dried blood and bellows long, singular tones like a throat singer. People stare but no one engages, even the cops wheeling past like dude is another fiberglass Herky.

This gets a laugh out of me, a big one. For the last 40 grueling minutes I’ve inched away from the stadium in a parade of party buses, Winnebagos, out of state plates, two Prevost coaches, and a beer wagon mixed with swarms of cops and cabs busy hunting prey. For enquiring minds, 40 minutes such as these are the reason for those exploitative stadium rates.

Soon as I drop my smart-eyed fare, more folks pile in and want to go back to the stadium.

“They’ve closed the roads to traffic,” I advise. “Closest we can get is Riverside.”

“And you expect us to pay for that?”

Over the taxi radio, dispatch is yelling like his office is on fire. This is after all Football Saturdays in Illinois City, Ohiowa, when we throw doors wide to mayhem unlike any other day of the year. The action just isn’t complete without a lot of rude yelling.

The crowds swell innumerable downtown, even in quieter quarters you wouldn’t suspect for debauchery, droves roving in their gang’s colors, shaking pennants and pompons and fists, shouting as they shove toward troughs of ice-cold beer, turkey legs, barbecued things on sticks. Money meanwhile blows in the street and bunches of us crowd at curbside looking for our hustle, whatever it is. Some rake in cash, others bleed like pigs.

There is a golden equation at work behind all this disorder and it must be pristine and godlike in expression. I would add it has already been quantified for you by qualified experts that have performed the laborious task of Figuring Out How This Shit Works. Make no mistake: Everything has been arranged to work just as it does, intended or not. The mousetrap we build had better be better than the last. No outperformance, no bonus, no crying, bitchez.

It gets to be people don’t even know or care what they’re celebrating, or who and what they are rooting against. Having gotten as far poisoning themselves, few are able to show signs of how they come along in other projects. Hence the wild fannings of cash and all the tough talk.

A few summers ago I had a job playing cards at Parking & Transportation until finding out I’d be on garbage detail during football games. “Hell no,” I said. “I’d rather drive a cab.”

This was one of those clichés of grim comparison like “I’d rather eat lead,” or “I’d rather poop out of my face and ears.”

Instead, here is Football Saturday all over again like another hot yellow wave roiling through a fever dream.

Four hours into shift, I make a cash drop and the beast already wants dinosaur juice. So I pull off at the station and find #301 also at the pumps. He hasn’t driven long—this is his second football season—but he became a fast veteran. #301’s got moxie, like Al Martin used to say.

But tonight, never mind that we’re into cash like we’re printing it, he looks already beat.

I wrinkle my nose at him, saying, “Your face is real long.”

“This shit was fun when it was fun,” he replies. “But it’s always ‘I’m too drunk,’ or ‘I can’t do it,’” shaking his head, thinking about it before striking his humor, “‘I gotta pay for my junk!’ Fuck this noise.”

We laugh to give our backbones ease, lighting cigarettes and pumping gasoline.

It happens to all cab drivers but it happens most regularly with dispatch. The first six months in the chair are an exhilarating breeze because green dispatchers can’t fathom what is actually happening. It is when they hit the steep brick wall of understanding that spirits sink along with the numbers. This is because the more attention paid to the details, the heavier reality gets. Einstein wasn’t wrong about that shit.

He stares overhead into the halogen glare that whizzes with a million flying things. We can hear downtown roaring from here.

Ten minutes later, I’m at the Clinton crosswalks when a daredevil jumps in front of my taxi, a flag of twenties wagging overhead in his fist. I crack the window but he shows no signs of budging. He looks like Meat Loaf, the singer, and weaves in my headlights as if he means to fight one of them.

He hollers, asking, “How much to the Quad Cities?”

I spy only three twenties in his fist and that’s not enough. Perhaps sensing my apprehension, he makes demands and raps the hood.

It’s a spectacular act but I nevertheless advise him my vehicle has a curb weight a little over four thousand pounds.

I hear this second caller from behind me, across the street. A woman, older in age and more oiled than Meat Loaf. She clings for balance to one of the city’s decorative trees.

Meat Loaf rears animal-like in my headlights and howls.

“Back off if you know what’s in it for you!” shaking his twenties at her and warning, “You see these? I’ll kick your ass, lady!”

He has stepped out of my range just enough that I can skinny past, wheeling over the parking island and away from both disasters. In the rearview, he is throwing twenties at me.

Lucky for him then that the wind is in his face.

Vic Pasternak has made your food, poured you drinks and driven you home. If he’s cranky, you probably deserve it. Or maybe not.