Let’s start with the bad news. Most movies have become too market-tested to really please their markets. Most movie theaters, especially in Iowa, are run by distant executives who see us as statistics. Even film festivals are schmoozy, overly-commercialized affairs.

Now, the good news! Every summer there’s the Hardacre Film Festival in Tipton, Iowa. This August 3 and 4, in the Platonic form of an old movie theater, you can see an interesting blend of the unexpected. Though none of the movies will be market-tested, somehow they’ll amuse, move and instruct their audiences exactly as movies are supposed to. Without demographic statistics, with only their good sense, miraculously the organizers of the festival will be screening independent and underground films that rattle our humanity. Go for a day, or go for both days. You’ll experience the old magic of cinema.

Here’s a guide to a few of the treasures.

– It’s Such a Beautiful Day
– The Flying House
– An Incomplete History of the Travelogue, 1925

If you see nothing else at Hardacre except Don Hertzfeldt’s new animated short, then you’ll leave completely satisfied. “It’s Such a Beautiful Day” is the third and final chapter of Hertzfeldt’s magnum opus Everything Will Be OK. Both of the first two chapters have been screened at previous Hardacres. If you missed the first two, don’t worry: It’s the kind of saga where each part stands beautifully on its own. Hertzfeldt’s art moves according to a fragmented, associative logic; it works directly on the nerves.

This final installment of the Bill series (the main character is a stick-figure with a bad memory named Bill) is the best one of all. The philosophical lyricism of Hertzfeldt’s bizarre montages of split screens, stick-figure animation and real-life footage has deepened. Basically, “It’s Such a Beautiful Day” is like The Tree of Life condensed into twenty minutes, with a little Buster-Keaton, Samuel-Becket absurdist humor thrown in. It’s a marvel.

You also shouldn’t miss “The Flying House,” an animated short by Winsor McCay, best known for his comic strip Little Nemo in Slumberland. McCay made a few shorts, but this was his last: His famous publisher William Randolph Hearst had grown sick and tired of a talented cartoonist wasting time on something so negligible as the movies (it was 1921). Bill Plympton, a contemporary animator, came across “The Flying House” and fell in love with it, even though he could find only severely beat-up copies of it. So he meticulously cleaned, recolored and re-recorded the movie. This new edition is exquisite, a beautifully-rendered flight of surrealism.

And if at all possible, try to see “An Incomplete History of the Travelogue, 1925,” in which our own Sasha Waters Freyer, of The University of Iowa, explores just how much historical freight can be packed into our fleeting moments. Playing gently with a very early travelogue, she focuses our attention on race, civilization, class, adventure and—why not just say it?—life itself, all in the span of nine minutes. 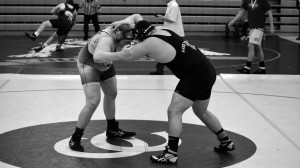 When I was in high school, we wrestlers used to take pride in the fact that, while you play football, basketball, baseball and so on, you don’t play wrestling. You wrestle. It’s an existential fact. You and a human of your same weight go up against each other without the help of a team, without equipment, without anything but skill and will. You find out who you are.

Fredric Golding’s new documentary On the Mat explores one season of high school wrestling at Lake Stevens’ High School, north of Seattle, and how a group of young men find out who they are through wrestling. Narrated by Chris Pratt (the mildly-handsome shoe-shiner in Parks and Recreation), who himself was once a wrestler at Lake Stevens, the movie looks at how the team almost falls apart and somehow manages to come together for a successful season.

At the center of the documentary is Steven, one of those kids to whom God decided to give a thousand problems and one great blessing. In this case, the problems include bad grades, a dead friend, indecent exposure and tremendous selfishness. The blessing is that he wrestles brilliantly. Through what must have been perceived as great luck by the documentarian, Lake Stevens’ whole season comes down to the unstable wrestler’s final match.

In the first few minutes of On the Mat I feared the doc was going to be a straightforward celebration of wrestling culture. In a way, it is. But it quickly gets into the harshness of human personality and what sports can do to improve or worsen us. By the time the movie is over, you’re not only rooting for the main characters, you understand the compassion and luck required to allow skill and will to triumph.

What are the two greatest things on the planet? I’ll tell you: bad-ass babes and comics. What happens when those two things collide? A mild-mannered documentarian/comic nerd is bitten by a radioactive feminist and is magically imbued with superhuman conscience and flair, I’m assuming. The result is Wonder Women! (Kristy Guevara-Flanagan), a film which at once made me feel empowered and like a terrible “emotional woman” stereotype because I was crying and hyperventilating with joy the entire time.

Basically, it is a 62-minute documentary about Wonder Woman. Or is it? Yes. But it’s also about women at large, not just the Wonder ones. See, the marvelous thing (or “DC-ous” thing, for the geeks) Guevara-Flanagan does is use a very specific topic (Wonder Woman) to approach a much larger issue (women’s equality).

Sure, sure. So it’s some girl power thing. What do girls know about comics? About as much as Gail Simone, renowned comic writer, knows. I mean, from her interview, she seems to know comics pretty okay. POW!

Yeah, yeah. Women and comics overlapping. It’s a niche and a cultural blip. Wrong again. You want social impact? You got your interviews with riot grrrls (Kathleen Hanna of Bikini Kill), you got your sociologists, cosplayers, crying single mother immigrants (don’t watch if you like taking your life for granted), you got your aspiring teen-girl filmmakers, all totally impacted. And, oh yeah, Lynda Carter, the real Wonder Woman (TV is real, right?). KI-BOSH! Sit down, nay-saying italics voice.

If you love your daughters, girlfriends, sisters and mothers, take them to see this fantastic gem of a movie.

Kit Bryant lives in Iowa City with her valid alibi and several innocuous non-lethal pastimes. Outside the workplace, she enjoys sarcasm, light spanking, and fleeting moments of hope and levity. More of her reviews can be found at http://popslashcorn.wordpress.com.