“Sometime during the early 1980s,” intermedia artist Lloyd Dunn recalled, “a number of people in many different places suddenly understood that they could afford to become publishers, as photocopy shops began to appear in cities around the world.”

In the years before the internet, artists, outsiders and other weirdos connected with each other through a snail-mail social network that flowed with photocopied zines.

These new printing tools, combined with punk rock’s do-it-yourself attitude, encouraged Dunn and his collagist collaborators to start PhotoStatic Magazine in 1983. Throughout the ’80s and ’90s, Iowa City’s zine underground cultivated everything from the détourned montages contained in PhotoStatic to a notorious tribute to academic superstar Judith Butler titled Judy! (along with zines that focused on punk, poetry, feminism, comics, politics, sci-fi and several other far-flung topics).

“The fact that we were based in the Midwest, and, like many zine producers, outside of the cultural centers on either coast, [meant that] a certain amount of cultural self-reliance was necessary and desirable,” Dunn said.

The local hub of activity was Zephyr Copies, where cartoonist Dan Perkins worked in the 1980s before launching his long-running strip This Modern World under the pen name Tom Tomorrow.

Perkins still recalls being star-struck when Bloom County creator Berkeley Breathed would bring in his original art to copy before mailing it out to be nationally syndicated. Likewise, the photocopied artist books that Perkins sold at Prairie Lights Bookstore helped inspire Dunn to create PhotoStatic, which he started printing at Zephyr (whose downtown Iowa City location permanently closed earlier this month, marking the end of an era).

Judy! mastermind Andrea Lawlor also frequented Zephyr, which was, they said, “the copy shop where mostly I had the hookup.”

“There was a general feeling in the air that they were sympathetic to artists and their sensibilities,” Dunn added, “so it was ‘the’ place to go.”

In the wee hours of the evening, Perkins honed his craft while operating machines that copied hundreds of college course reading packets.

“I’d be there late,” Perkins said, “with a lot of downtime while the machines ran, which gave me time to work on my own zines and the collage-based comics that were the predecessors to what I do today.” He would experiment on the job by playing with the degradation that occurred after photocopying the same image multiple times until it looked abstracted and strange.

“When you turn a photocopier into an art-making tool basically you’re détourning a business machine into doing something that could be very easily anti-capitalist or anti-business,” Dunn said, “or even revolutionary, in the right hands.”

By compiling and publishing a variety of work from around the world, PhotoStatic became a meeting space for numerous strands of the zine community: xerography artists, queerzine publishers, mail art aficionados, punk designers, Barbara Kruger-inspired meme makers and more. At the height of PhotoStatic’s publication run, when its circulation peaked at around 750 per issue, mail arrived from five continents, even communist countries.

The zine network was enabled by resources like Factsheet 5, a cheap newsprint magazine that was sort of like a pre-internet search engine. It organized the chaos by offering an exhaustive listing of short descriptions, addresses and purchasing information for zines and other odd ephemera. Factsheet 5 led me to discover both PhotoStatic and (via return mailing address) the existence of Iowa City while living in my home state of Virginia over a quarter century ago.

This was also how I became aware of Judy! — “It’s not a fanzine; it’s a highly parodic cultural practice,” read the tagline to the second issue — which deliriously celebrated its namesake, Judith Butler, and queer theory as a whole. This send-up of academic celebrity was first published in spring of 1993 by Lawlor, a writer who was then an undergrad English major at the University of Iowa using the pseudonym Miss Spentyouth.

“I was inspired to make Judy! because I hung out mostly with grad students at the time and was interested in the way that we all felt about Judith Butler and Foucault and Barthes and queer theorists in general,” they said.

These adventures in queer theory were personally transformative for Lawlor, which influenced their book Paul Takes the Form of a Mortal Girl, a critically acclaimed novel that was originally published in 2017 by Iowa City’s Rescue Press and will be re-released by Vintage Books this April. Before creating Judy!, Lawlor had already been making small artist books and other self-published objects after becoming immersed in zine culture around 1987, via Factsheet 5 and Larry-bob Roberts’ influential zine Holy Titclamps.

Blending DIY punk zine aesthetics with the bubbly fizz of a celebrity glossy, Judy!’s two-issue run included a reader quiz titled Are You a Theory-Fetishizing Biscuithead? (“discover if you’re an illiterate pre-theory peon, or not!”); a chance to win “A Dream Date With Your Fave Theory Superstar”; and a Butler paper doll page (“Give Judy the Phallus!”). Additionally, a “Secrets of the Stars” gossip column breathlessly reported from the 1992 Modern Language Association conference: “The New York Hilton was SIZZLING this December as the famous theorists swarmed the lobby and the cash bars. The homo cash bar was a starfuckers delight. The glitterati were in effect all night long. Eve Sedgwick worked the crowd. Kevin Kopelson breezed in and out, looking very Details in a polka-dotted tie.”

Lawlor even sprinkled some surreal fan fiction into the textual gumbo: “I dreamed that Kitty MacKinnon and Andrea Dworkin were in a mudwrestling match wearing small shiny bikinis and Judy was the ref. In my dream Judy looked red-hot despite the tacky Foot Locker outfit.” The zine stirred up widespread national coverage, and an editor at a large New York publishing house approached Lawlor about developing Judy! into some sort of book project.

“I was completely freaked out and didn’t write another word until I was 30,” they said. “But I do think that my fairly naïve critique of celebrity culture in academia hit a nerve for people.” 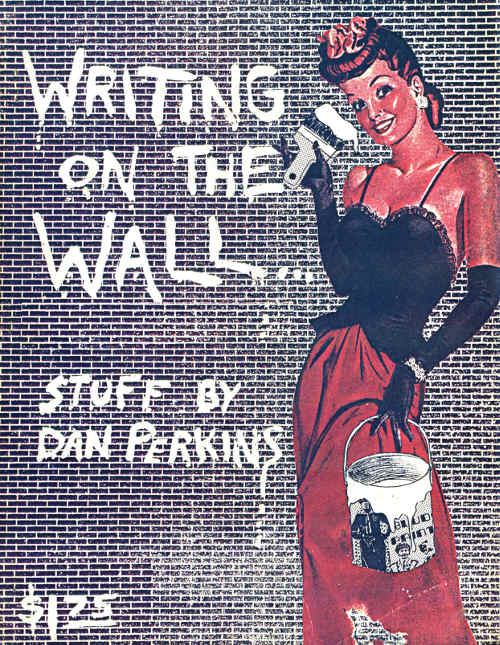 It also prompted a terse public response from Butler. She referred to Judy! as “trash” in a letter to the editor published in Lingua Franca, which had profiled the zine and its maker in an article titled “Putting the Camp Back in Campus.” Butler argued that it signaled “the eclipse of serious intellectual engagement with theoretical works through a thoroughly hallucinatory speculation on the theorist’s sexual practice.” (Admittedly, Judy! was quite hallucinatory.)

Lawlor is now a teacher, parent and published author who better appreciates how Judy! was interpreted by its reluctant subject. “I can understand not wanting that kind of gossipy attention, or at least being ambivalent about it.” In fact, Butler was quite kind during their only phone conversation (during which the theorist uttered the phrase “highly parodic cultural practice,” appropriated as the tagline for the second and final issue of Judy!).

Iowa City’s denizens had a wide reach, despite their position within the cultural peripheries. Perkins’ late night copy shop experiments evolved into the nationally syndicated comic strip This Modern World, Miss Spentyouth’s academic satires reverberated far outside the halls of the English Department and PhotoStatic even slipped through the Iron Curtain. Zines provided their readers and contributors with a space to meet each other, crack jokes, develop innovative aesthetic forms and create alternative communities — rehearsing the kinds of exchanges that now occur online.

Many zinesters in search of new ways to connect became early internet adopters, something that contributed to the scene’s waning momentum around the time Factsheet 5 ceased production in 1998. All that is solid melts into air, but there was a time when distant social connections regularly left traces on ink-stained fingers.

Kembrew McLeod is practicing his Yoko scream, inspired by this winter’s hellish weather. This article was originally published in Little Village issue 258.