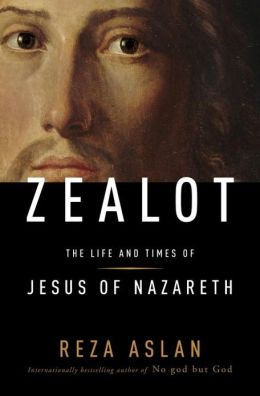 Here is Fox News host Lauren Green doing what Fox News does best, channeling Fox News viewers’ mouth-breathing xenophobia into television programming. The lucky recipient is religious scholar Reza Aslan, author of Zealot: The Life and Times of Jesus of Nazareth, which attempts to sort out some facts about a socialist sandal-wearing hippie Palestinian troublemaker who was executed by the Romans. It’s the kind of historical scholarship that gets done all the time in academe, but that can freak out the faithful. But the interview doesn’t even get to the content of the book; it’s all about the fact that Reza Aslan is a Muslim who (gasp!) wrote a book about Jesus. Is that even allowed?

We’d bet that Lauren Green is not actually as heroically stupid as she appears to be here, asking again and again (ThinkProgress counted nine times in the full 10-minute interview) just why on earth a Muslim person would go and write a book about “the founder of Christianity.” We’ll give Aslan credit for not simply saying, “Don’t be silly. I wrote a book about Jesus, not about Saul of Tarsus.”

Instead, Aslan seems to think that he’s in an actual conversation, explaining patiently that he wrote the book because he’s a religious scholar with a bunch of degrees, and writing books about religion is what religious scholars do. Green doesn’t quite buy it, because after all he is a Muslim, and isn’t that weird?

Green: But it still begs the question why would you be interested in the founder of Christianity?

Aslan: Because it’s my job as an academic. I am a professor of religion, including the New Testament. That’s what I do for a living, actually.

And once again, we’d like to congratulate Aslan for his restraint in not saying “that’s not what ‘begs the question’ means, you idiot.”

Green then reads from a column by John Dickerson — conveniently published on Fox News — that says Aslan “is not a trained historian” but merely “an educated Muslim.” (Aslan has advanced degrees in religious studies, including a doctorate in history of religion. But his degree is not from a history department. Academics, begin your incessant nattering, pro and con, on whether that means Aslan is a trained historian, in the comments!) Dickerson, unburdened by any actual knowledge, dismisses Aslan’s book as “long-held Islamic claims” about Jesus, although Aslan says that the book also “overturns pretty much that Islam thinks about Jesus,” not that this gets him any traction.

Aslan gamely returns to the questionable notion that qualifications should count for something:

To be clear, I am a historian. I am a PhD in the history of religions. This is a piece of history,” Aslan incredulously responds. “I’m not sure what my faith has to do with my twenty years of academic study… I think it’s strange that instead of debating the merits of the book, we’re actually discussing the right of the scholar to actually write it.”

Hey, that kind of thinking may fly on NPR, buddy, but it’s just crazy talk on a network that regularly presents Pam Geller as an expert on Islam and whose top-rated show is hosted by a man who doesn’t know how tides work.