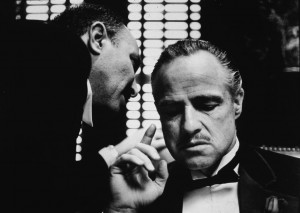 Forty years ago, throughout the spring and summer of 1972, a mob movie was making a killing at the box office, which was something of a surprise to its production company.  Paramount had wanted Sergio Leone, of spaghetti-western fame, to direct it. They settled for a fairly young director whose biggest success at the time was an adaptation of Finian’s Rainbow, a musical about a leprechaun and a pot of gold. Paramount had also failed to secure either Laurence Olivier or Ernest Borgnine for the lead role, and either Robert Redford or Ryan O’Neil for the crucial supporting role. Instead, the young director, Francis Ford Coppola, cast the cantankerous Marlon Brando (after Paramount’s president had exclaimed, “Marlon Brando will never appear in this motion picture!”) and a nobody by the name of Al Pacino. Did Coppola make them an offer they couldn’t refuse? To top it all off, throughout the movie’s production, the bigwigs at Paramount threatened Coppola with a “violence coach” to help him add excitement to what they regarded as a long dull movie.

Thank God that Coppola won out. (Well, for the most part: he did throw in a couple more violent scenes). For the past forty years The Godfather has stood as a fulfillment of the promise of cinema, magically effacing the line between entertainment and art. Stanley Kubrick and your beer-bellied neighbor have both gushed that it’s the greatest film ever made.

It is extremely well made. Everybody notes the greatness of things like the cast (Brando, Pacino, James Caan, Robert Duvall, Diane Keaton and all the pungent performances of the lesser-knowns), the script (by Coppola, Robert Towne and Mario Puzo, who wrote the popular novel it’s based on), the chiaroscuro cinematography and Nino Rota’s haunting score. But even the detail-work is marvelous. Revisit the sound-mixing in the scene where Michael meets Sollozzo and McCluskey in the restaurant. Throughout their conversation, you hear the periodic rumbling of a train, despite the fact that there’s no train nearby. When Michael pulls the gun, the rumbling suddenly crescendos. Right before he puts a bullet through Sollozo’s skull, you hear the screech of brakes. I must have watched that scene thirty times before I consciously noticed those train sounds, yet they’re crucial for just how plunged the viewer is into Michael’s anxious urgency.

But the real source of The Godfather’s obsessive magnetism runs deeper than technique. It pertains to how Coppola found a way of using the mob-movie genre to get into our heads and work on the tragic contradictions inside.

But since the early 70s, when The Godfather was made, there’s been so much transformation of the American family, and so much suspicion of American power, that audiences, especially men, have felt some nostalgia for the “good, old days” of patriarchy. The Godfather, as the title suggests, still injects into our veins that rush of beneficent male power and all its trappings: loyalty, violence, virtue, sacrifice, sexual power. From the very first swirling scenes of Connie’s wedding, we all want to crowd into the Corleone’s family picture. Through Michael, the main source of our identification as viewers, whatever grudging distance we try to keep from the family business melts into the full embrace of Vito’s world.

At the same time, the movie offers us much more than a nostalgic vision of male power. The famous last scene, where the door shuts on Kate, hints that Michael’s embrace of la famiglia will eventually destroy his own family. This tragedy is most poignantly played out in Godfather II, when Michael has his own brother killed, but it’s powerfully latent in Godfather I. In the 1950s the great critic Robert Warshow pointed out that gangster movies were the closest thing Hollywood had to tragedies. But it isn’t until The Godfather that the full force of their tragic potential is realized. Like no other mob movie, we yearn deeply to be a Corleone and yet stand in horror at what that longing entails.

Every Godfather devotee has to have a favorite scene. Mine is when Michael and Vito are talking business at a garden table. Vito digresses, “I like to drink more wine than I used to. Anyway, I’m drinking more.” Michael responds sweetly, “It’s good for you, Pop.” For that moment, and that quiet luminous moment alone, Michael perfectly fulfills our longing to love and be loved by the Godfather.

Scott Samuelson teaches philosophy at Kirkwood Community College and blogs about music with his son at billyanddad.wordpress.com