Voting Rights For All

Iowa City Public Library Room A, B, C — Wednesday, Nov. 2, 2016 from 7-9 p.m.
Hosted by Inside Out Reentry and the League of Women Voters of Johnson County

Tracy Gryp keeps a framed copy of her voting rights restoration certificate signed by Gov. Tom Vilsack in 2005. She stuck “I Voted” stickers in the top corners of the frame — one for the first time she cast a ballot in a local election and another for her 2008 vote for president.

Gryp has made mistakes in the past — she served time for a felony charge of conspiracy to manufacture methamphetamines — but she turned her life around, she said, and a key moment in her return to society was regaining the ability to vote.

“I felt like I had paid my proverbial debt to society and I didn’t think that I should have to pay for the rest of my entire life. I didn’t feel like I should be considered a second-class citizen in the United States of America,” she said.

Voting may not seem like a big deal to everyone, she said, but it had a huge impact on her life.

“It just makes you feel like you are a part of your country. It really does something to restore that sense of purpose and that sense of belonging in your community,” she said.

For others in Iowa that have a felony conviction in their past, regaining the right to vote means navigating a bureaucratic process and working through misunderstandings caused by Iowa’s changing stance on felon voting rights and by the differences in how each state deals with voting rights restoration.

Currently, Iowa is one of only four states with permanent constitutional voting bans for people with felony convictions. Only in three of those — Iowa, Kentucky and Florida — is the onus on the individual to apply to the governor to have those restrictions lifted. Virginia’s governor recently initiated a process to grant voting rights restoration on an automatic, rolling basis as individuals complete their sentences. 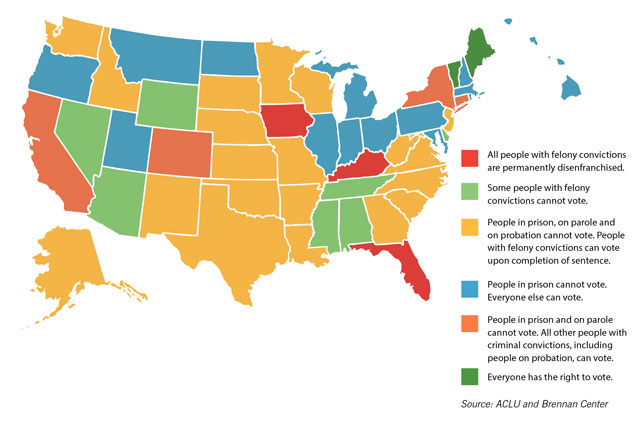 But Iowa wasn’t always this way. In 2005, then-governor Vilsack issued an executive order restoring voting rights to people who had completed their sentences for felony convictions and providing automatic restoration thereafter. Over the next few years, an estimated 115,000 people had their voting rights restored.

In 2011, just after taking office, Gov. Terry Branstad signed an executive order of his own and reinitiated a process in which former felons must apply for their voting rights.

Over 52,000 people in Iowa, 2.2 percent of the population, are unable to vote due to a felony conviction, according to estimates from the Sentencing Project, a nonprofit research organization that advocates for criminal justice reform. However, news reports in Iowa have cited a higher number — 57,000 Iowans — based on a state database of disenfranchised felons. The Sentencing Project estimates these Iowans are among as many as 6.1 million Americans nationwide who are disenfranchised due to a felony conviction.

An Iowa Supreme Court case decided earlier this year upheld the lifetime voting ban for those convicted of an “infamous crime,” which the court defined as any felony conviction.

The case was brought by a Montrose, Iowa mother who brought her kids to watch her cast a ballot in a 2013 city election. The woman, Kelli Jo Griffin, said she was unaware that with her conviction in 2008 on a non-violent drug felony she lost the right to vote. Griffin argued that her crime should not qualify as “infamous,” but the court disagreed.

The application process has been simplified, with applicants now required to respond to 13 questions instead of 29. Among the items removed were requirements that applicants provide up-to-date addresses of the parole or probation officer, prosecutor, defense attorney and judges involved in their cases as well as information about child support payments and their tax return history. A previous streamlining effort in 2012 led the governor’s office to remove a requirement that applicants include a credit history check.

However, applicants today must still complete the current form and provide either proof of payment of court costs, fines and restitution or proof that those payments are being made and an explanation for why they have not yet been completed. Applicants must also include a current criminal history check with the Iowa Department of Criminal Investigations. Both require additional forms.

According to Brandstad’s office, 148 people have had their voting rights restored since Jan. 14, 2011. Every individual who is eligible to receive a restoration of their rights and who completes the form correctly is approved, Colin Smith, the deputy legal counsel for the governor’s office, wrote in an email.

Ben Hammes, the communications director for the governor, said Branstad views voting as a qualified right, which an individual has until he or she commits a felony and loses that right. He said the process ensures felons who are eligible to have their voting rights restored are current on all fines and restitutions.

“We review each application individually and on its own merits. Gov. Branstad takes this responsibility very seriously as the chief executive of the state,” Hammes wrote in an email.

Mike Cervantes, director of the Inside Out Reentry Community in Iowa City, pointed to the low number of people who have had their rights restored as proof of the challenge posed by the current restoration process.

“There’s this idea that you just fill out a form, but it’s a lot more complicated than this,” he said.

The Inside Out program serves as a resource center for individuals returning to society after incarceration by providing mentoring and a sense of community. Cervantes said the group hasn’t focused much in the past on restoring voting rights — basic needs like finding housing and a job often take up much of their time. However, he said it’s something he hopes to focus on in the future.

“There’s a lot of uncertainty among employers, among landlords in the community about welcoming back somebody who’s been to prison,” Cervantes said. “Allowing the person a right to vote is a risk-free, very positive way to welcome someone back.”

Cervantes sat at a table alongside Letisha Molina in one of the rooms of the First Baptist Church, where the program is housed.

Molina, originally from Tucson, Ariz., served time for drug charges, but has been drug-free for five years and has found a home in Iowa City through the Inside Out program.

“I never thought I could have so many people in my life that could help me, be by me and believe in me,” she said.

Molina said she has turned her life around and now hopes to apply for the right to vote.

“I’ve never voted. I’ve always had a felony. Everyone asks me, ‘How can you not vote?’ Whenever I’m asked I would be embarrassed because of my past,” she said.

Molina said she hopes that the governor’s office considers the changes she’s made when looking at her application.

“I want to give back to the community, too. And if they could see that, and see that pattern, why couldn’t they help people like us be able to vote?” Molina said.

The issue isn’t new to Cervantes. In 2005, while a teacher at Metro High School in Cedar Rapids, he led a group of students to lobby for a change to the voting rights restoration process for felons. The group was part of an effort that culminated in Gov. Vilsack signing the order to grant automatic restoration.

“It was a good solution, but it was temporary. A couple governors later and it was back to ground zero,” Cervantes said.

Some of those students are picking up the cause again, such as Jorel Robinson, who said he hopes to help create a grassroots movement to bring the issue to the forefront in Iowa.

“It’s a tricky issue because you are talking about people who at some point made a mistake or committed a crime,” Robinson said. “It’s not to say that anything they’ve done is right, because it’s not. They committed a crime and they should have some form of punishment. I just disagree with it being a lifetime punishment and I disagree with them being eliminated from the [voting] process.”

He said he worried about the discouraging effect that being excluded from the political system has on those who are trying to rejoin society. He also voiced concerns about this practice eliminating certain demographics from the electoral process.

According to the Sentencing Project report, an estimated 9.8 percent of African Americans in Iowa are disenfranchised.

“It’s upsetting because to me it seems so basic,” Robinson said. “If people live among us and pay taxes, they should have a voice about who governs them.”

Robinson is part of a group called the Big Bang Band, which, in addition to producing and performing music, works to help improve the Cedar Rapids community where he grew up.

Bandmate Isaiah Snead, a father of four, also works and volunteers in the community, including at the Willis Dady Shelter in Cedar Rapids. With two felony convictions in his past, he said he knows firsthand what it’s like to be unable to vote. He said he would like to encourage others to vote, but is afraid they’ll ask him whether he’s voting and he’ll have to say no.

“There’s no rebuttal to that. I just walk away with my head down,” he said. “It’s like they look down on me because of that title. Whenever I’m with someone, I want to let them know that I’m a good person first because when they find out that you are a felon it’s a tally against me.”

He said he has applied for his voting rights before, but was denied. Now, he hopes to try again.

Lauren Shotwell is the News Director for ‘Little Village.’ This article was originally published in Little Village issue 208.