As the final week of early voting begins, Iowa is in the process of setting a new record. On Friday afternoon, Iowa Secretary of State Paul Pate tweeted that 708,899 voters had already cast a ballot for the Nov. 3 election, breaking the previous record set in 2012, when 679,118 Iowans voted early. 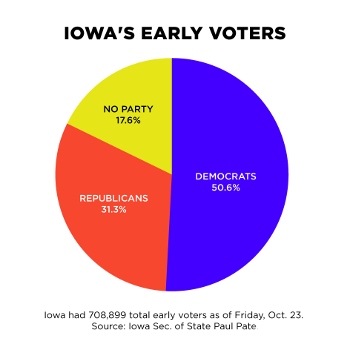 Johnson County has one satellite voting location open this week. People wanting to vote early can do so at the Iowa City Public Library from Monday through Thursday, 11 a.m. to 6 p.m. On Friday, hours will be 10 a.m. to 6 p.m. The final day for early voting at ICPL will be Saturday, from 10 a.m. to 4 p.m.

Drop boxes are available in both counties for anyone who has already filled out an absentee ballot but doesn’t want to return it by mail. The Johnson County Auditor’s Office has two drop boxes located on the south side of the Johnson County Administration Building. The drop box in Linn County is at the drive-through early voting site. Absentee ballots must be in a drop box by the time polls close at 9 p.m. on Election Day, Nov. 3, in order to be valid.

The voter ID law passed by the Iowa Legislature in 2017 is in effect for this election, so those who want to vote early in person should bring one of the following forms of identification to their voting site.

If a voter doesn’t have one of the acceptable forms of ID, another registered voter who has ID can attest to the ID-less voter’s identity. The voter without ID can then cast a provisional ballot.