Iowans love beer. And for the past decade, Iowans have loved craft beer. A new beer snob is born every day after sitting down to their first pint of Peace Tree’s Blonde Fatale or Toppling Goliath’s HOPSMACK!

Iowa’s microbrewery renaissance began in earnest after March 2010, when new state legislation changed the alcohol-by-volume (ABV) cap for Iowa brewers from 7.6 percent to 15.3 percent. Local beer became hoppier, wheatier and, most of all, stronger.

But as our newfound craft beer taste collides with the bar-hopping, tailgating, backyard-barbecue rituals of Eastern Iowa, unsuspecting social drinkers may find themselves stumbling after just one or two of their favorite brews.

While they might not offer much in the taste department, Bud and Busch and Miller and Coors Lights are easier to portion out. These domestics contain around four percent ABV, meaning you can drink several cans of PBR and not completely make a mockery of the National Institute on Alcohol Abuse and Alcoholism’s recommendation to consume no more than two five-percent-ABV drinks a day.

But unlike corporate breweries, most local brew houses don’t have the storage capacity required to craft lagers and pilsners, which tend to be less alcoholic. And for the ales, porters and wheat beers they can brew, it is often equally expensive, if not cheaper, to brew a beer with twice the strength.

In fact, many microbreweries have hung their hat on Imperial and Double India Pale Ales, which have ABVs as high as 14 percent. Customers may be getting more bang for their buck when beers are stronger, but they’re more likely to bang into something when they stand from their bar seat.

After some backlash from consumers, breweries recently began to brainstorm session beers — beers with an ABV lower than six percent, of which you can drink several over a long period of time. Many are summer seasonal beers, but a choice few are available all the livelong year.

If you want to keep up with your Bud-guzzling comrades — or simply enjoy a few craft brews and still keep your head — we’d recommend sticking to beers under five percent ABV, session or not.

Here are some great, local, low-ABV craft beers for session drinking. They may be rare, but these local breweries have your back:

A tart cherry rhubarb sour beer with a Raygun-designed label. Was re-released on Aug. 25 for Backpocket’s fifth anniversary. On tap throughout eastern Iowa

An American Pale Lager with a light, toasty flavor. On tap and in cans throughout Iowa

A Berliner-Weiss-inspired sour made with raspberries, blackberries and cherries. On tap throughout eastern Iowa and Des Moines

A crisp and slightly dry German-style Kolsch Ale. On tap and in cans throughout eastern Iowa 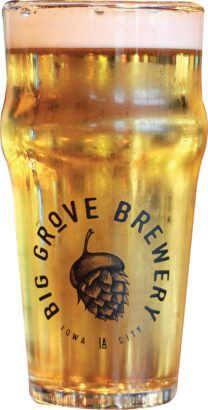 A Golden Ale with a delicate malt character and hints of citrus, grass and floral. On tap throughout eastern Iowa and Des Moines

Belgian-style White Ale — or Wit — with a classic, spicy taste and citrus tones. On tap and in bottles throughout Iowa

A session India Pale Ale that blends Citra, Mosaic and Cascade hops. On tap and in bottles throughout eastern Iowa

A tropical session India Pale Ale brewed with hops, passion fruit, grapefruit and mandarin oranges. On tap, in cans and in bottles throughout Iowa

Brewed at Wilson’s Orchard, this hard cider utilizes tart cherries. On tap and in bottles throughout Iowa

Another Wilson’s Orchard cider combining sweet peach and apple. On tap and in bottles throughout Iowa

Thanks to Doug Alberhasky of John’s Grocery for lending his expertise. This article was originally published in Little Village issue 227.