The Iowa Review Reading ft. Tracie Morris, Dessa and others


“After like two years of rejections,” Dessa wrote on Twitter in early 2021, “my short story just got accepted into a literary magazine, and I am about to order the fuck out of some takeout.” 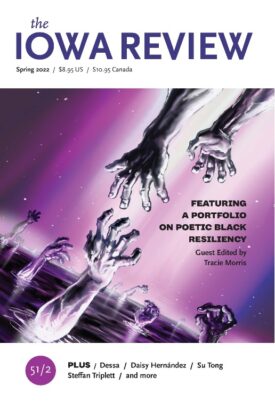 The acclaimed rapper, singer and writer was riding high after learning that The Iowa Review planned to publish “As Close as You Get,” which recently appeared in the Spring 2022 issue. It was a level-unlocked moment for Dessa, who started out with dreams of pursuing a literary career before taking a roundabout route through the indie hip-hop world.

“For me, a lot of what I do exists under the larger umbrella of the language arts,” she told me. “I fell in love with language when I was a really little kid, and I would say that my love of words and language predated any vocational ambition.”

Dessa vividly recalls the moment when her mother was reading aloud from Peter Rabbit and she learned the meaning of the word “fortnight,” which struck her as an exotic name for a two-week span of time.

“My mom often encouraged me to sing along with songs that we both liked on the radio,” she said, “especially a harmony line or an ad lib — which got extra attention for mom — so we’d make up vocal lines to pass our time. As for poetry, I remember doing rhyming couplets as part of an assignment in fourth grade, and by the time I was in junior high, I was pretty excited about writing.”

College opened new doors for Dessa, especially when she discovered other literary forms like creative nonfiction essays, and the wide-eyed young writer was inspired to share her work with the world. Not fully aware of how connections grease the gears of the literary publishing machine, she sent her manuscripts in self-addressed stamped envelopes to magazines like the New Yorker, hoping to catch a big break, only to be greeted with radio silence.

“I was getting zero traction,” Dessa said, “so my friend suggested that I try performing in a poetry slam, and that was the way that I first entered the world of performance. I had a couple of half-written songs with a friend of mine in college who played acoustic guitar, but we never really performed them in public. My initial foray into music happened when a member of the Minnesota hip-hop community saw one of my slam performances and asked if I might be interested in working with a beat.”

Dessa hadn’t made rap music on her own before this moment, but soon she became a founding member of the Minneapolis-based hip-hop crew and record label Doomtree — which released her debut EP, False Hopes, in 2005. It set her on a new creative path that has yielded several singles, albums and collaborations that blur the lines between hip hop and pop, underground and mainstream.

In 2016, Lin-Manuel Miranda tapped Dessa to contribute to The Hamilton Mixtape, where she appeared alongside the Roots, Alicia Keys, John Legend, Queen Latifah, Chance the Rapper, Kelly Clarkson, Nas, Busta Rhymes and other music luminaries. The Hamilton connection had a deeper resonance given that Lin-Manuel and Dessa are both of Puerto Rican descent (her mother is a Bronx-born Nuyorican who relocated as an adult to Minneapolis, where Dessa was born).

“I somehow appeared on the periphery of Lin-Manuel’s radar before Hamilton had made the transition to Broadway,” Dessa recalled, “and he and I had penned a few casual messages. Then we ended up meeting, and later on he called me and asked if I’d be able to contribute to The Hamilton Mixtape, which was like the easiest ‘yes’ ever.”

Two years later, the venerable trade press E.P. Dutton published Dessa’s My Own Devices: True Stories from the Road on Music, Science, and Senseless Love, after years of largely being ignored by the literary establishment.

“Part of the reason why I ended up in music,” Dessa said, “was because I wasn’t sure exactly which doors to knock on, whereas in the performance world, it’s less gate-kept. I can put music into the world myself and get traction, but I need someone else to say ‘yes’ if I want to have my writing distributed in a significant way. It was essentially through being rejected by literary publications that I wound up being invited to become part of the hip-hop world, and then 17 years later, I was able to sell my first book, so it’s kind of been a full-circle experience.”

Even after publishing My Own Devices — along with several poetry collections and chapbooks — Dessa still finds it hard to crack the lit world’s code, which is why it felt so gratifying to have her short story accepted by The Iowa Review. Over the course of the magazine’s painstakingly slow and deliberate blind review process, a volunteer fiction reader and the fiction editor each recommended the piece for publication. When it landed on the desk of TIR Editor Lynne Nugent, her decision was a no-brainer.

“I read the first sentence, ‘Your teeth sometimes fall out of your head,’ and was pulled into the energy of the language and the way time gets turned inside-out in the story,” Nugent said. “It was a slam-dunk to accept. I was the first person with the access level to see the author’s name. Hmm … Dessa? About a week before, I had seen and reshared on Facebook a very goofy and NPR-nerdy but also catchy, feminist and inspiring music video celebrating Janet Yellen becoming Secretary of the Treasury.”

While Nugent and thousands of others were enjoying that video, the author had been patiently awaiting TIR’s final decision for five months — a humility that struck Nugent as very Midwestern. It’s not uncommon for someone with Dessa’s profile to try to work the system to avoid the proverbial slush-pile, especially because success in many parts of the literary world still has much to do with who you know. 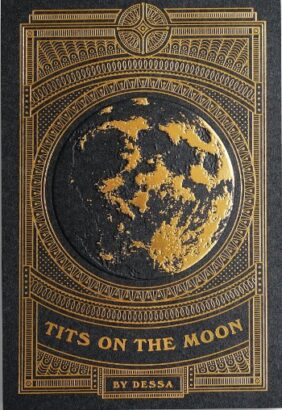 “Yeah, I grew up in the Midwest,” Dessa said, “and that workmanlike sensibility is definitely something that we celebrate, for better and for worse. It’s funny, as much as I do revel in messing with genre and trying to turn an audience’s expectations inside-out, in other ways, I’m also kind of a rule-follower. It didn’t even occur to me to jump the queue. I just thought, ‘They’ve got a process.’ So, I just submitted and that was that.”

Lately, Dessa has been working on a new album with a tentative early-2023 release date and she recently finished Tits on the Moon, a chapbook collection of 12 performance poems published by the Minneapolis-based literary organization Rain Taxi, in collaboration with Doomtree. As an independent artist who is deeply invested in the DIY ethos, she admits that it still feels good to have an established literary institution value her writing.

“The process of submitting writing can be more than a little demoralizing,” Dessa said. “It’s slow. It is solitary and there’s a lot of uncertainty — so yeah, when you ask them to dance and they accept, that just feels really good.”

Full disclosure: Kembrew McLeod and Iowa Review editor Lynne Nugent have been married since 2005, when they were wedded by an Elvis impersonator at the Graceland Wedding Chapel in Las Vegas (her idea, and he happily agreed). This article was originally published in Little Village’s October 2022 issues.