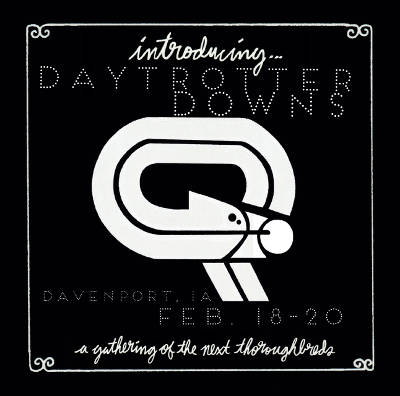 Quad Cities-based music website and recording studio Daytrotter announced yesterday that it will hold an inaugural music festival in Davenport on February 18-20. Daytrotter Downs, named for an old East Moline horse track, will be held in venues across the city, including the Adler Theatre and Daytrotter’s own Renwick Building. It will bring together twenty-five to thirty bands that “people are going to be shocked are unknown,” said Daytrotter founder and festival organizer Sean Moeller.

Confirmed bands include Toronto’s Allan Rayman and Mothers, from Georgia. More acts will be announced starting in the new year.

Moeller says it’s long been in the back of his mind to host a festival. “It seemed like the time was right,” he said. “The goal is just to get people embracing that there’s great things happening not only in Davenport, but in the state of Iowa. We’ve sort of hung our hat on being this institution that likes shining light on things.”

The festival is a celebration of Daytrotter’s tenth anniversary, as well as the opening of its new Davenport venue. But Moeller’s main mission is to present a selection of talented young artists to new audiences.

“You’re getting to witness things before they take off,” he said. “My goal with this is I’m trying to pick thirty people who are going to blow up, and what a cool thing it would be to be able to say you saw these people in Davenport, Iowa in February 2016 among 300 or 400 other people. That could be really special.”