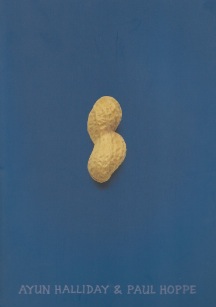 In Ayun Halliday and Paul Hoppe’s Peanut, a girl named Sadie decides to inform her classmates at her new high school that she’s deathly allergic to peanuts — it’s the kind of thing you’d want your new friends to know, after all. But she hips the reader to a secret in the final panel on page seven. Looking out through the fourth wall, she announces, “I’m not really allergic to peanuts.”

Sadie’s secret, the lengths she will go to keep it and its consequences shape this graphic novel for young adult readers. The book could have easily slipped into the tone of an ABC Afterschool Special — complete with heavy-handed messaging about the dangers of lying and the value of being yourself — but Halliday and Hoppe largely manage to avoid this. Their characters are well drawn, both figuratively and literally, and when Sadie delivers the moral of the story, it feels in keeping with her voice throughout the book. She’s learned a lesson she wants to impart to the reader, but she isn’t preaching.

Halliday has created a believable cast of characters. Sadie’s insecurity at her new school rings true, and her narrative voice is intimate, as though the reader is her close friend. Her relationship with Zoo, a quirky young man who eschews modern technology in favor of intricately folded personal notes, hits the standard teenage rom-com notes perfectly. The ups and downs of her friendships and rivalries with other girls add much of the humor and poignancy to the book as treasured bonds are strained by distance and dishonesty.

Halliday’s adults — a curmudgeonly but concerned teacher, a wise school nurse, Sadie’s mom — are more fully realized than in much young adult fiction. Their feelings and reactions are given time and space in the story, allowing these adults to be more than shallow annoyances or moralizing figures who have stilted, false-feeling connections to the younger protagonists.

Hoppe’s grayscale artwork is accented by the pale red color Sadie always wears. The color doesn’t appear to be a symbol of anything in particular, but rather is a simple visual device that highlights the fact that this is Sadie’s story. The mass of teenagers who populate Hoppe’s school is made up of distinct individuals. Each of the primary characters has a personal look — snazzy glasses, a trendy haircut, a style of dress — that seems in keeping with the teenaged quest for self-identification. The art manages to feel both airy and detailed, realistic and stylized. It’s subtle, but it never fails to enhance Halliday’s story.

Halliday and Hoppe throw in just enough vaguely naughty material to spice things up for the targeted young-adult audience. Sadie and a friend joke about getting a boy’s name tattooed on Sadie’s butt. Sadie later gives the same friend the finger in absentia after an awkward phone call. In moments of panic, both Zoo and a teacher swear. Sadie has a locker room conversation with a friend who has “fooled around” with a boy, a boy she had until then only thought of as a friend. These moments feel just a bit forced, as though Halliday and Hoppe were concerned that the story might be overly sweet and innocent without them.

And it’s fair to say that Peanut is in fact quite sweet and innocent. But it isn’t saccharine and it doesn’t ignore the consequences of Sadie’s lie. It should appeal to readers — YA and adult — who enjoy character-driven stories about self-doubt, loyalty among friends and finding a path forward after things go awry.