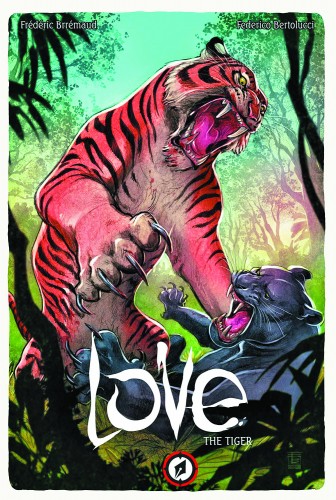 The epigraph at the beginning of Love Volume 1: The Tiger offers enigmatic insight into the wordless graphic novel that follows:

“In the animal kingdom, animals neither love nor hate each other. Love and hate are parts of a natural whole, a supreme balance many consider to be universal or even divine. An elemental love. A love that mankind could never experience.”

What follows is an exquisitely rendered day in the life of a tiger. Writer Frédéric Brrémaud and illustrator Federico Bertolucci take us to the jungle to bear witness to the strivings of a host of animals with which the tiger crosses paths. The 2011 French graphic novel is as suspenseful as it is lovely, and it will arrive in the U.S. on March 10.

We see the tiger pursue a tapir, tangle with a crocodile, rumble with some monkeys and much more. There is quite a bit of violence and a smattering of sex (rendered less explicitly than the violence). There is also humor—a male peacock makes his play for a mate, the tiger scurries away from an anthill, an elephant dislodges an avian hitchhiker—to balance the scenes featuring the baring of tooth and claw.

Brrémaud carefully constructed the arc of his plot so that our feelings for the tiger shift from scene to scene. As it chases the awkward and fearful tapir, we root for the latter to make an escape. When the tiger encounters the crocodile or a pair of slinky, ferocious panthers, our allegiance switches to the tiger.

This deftly crafted narrative demonstrates the ways in which we anthropomorphize animals and generally cheer for the underdog, or the outnumbered, and, though we might be embarrassed to admit it, the attractive. By calling our attention to this, Brrémaud reflects the truth of the epigraph while also setting up his stunner of a surprise ending.

Bertolucci’s art for this book is gorgeous. Each animal—whether on land, in the water, or in the trees and the air—is infused with a palpable kinetic energy. These creatures creep and scurry and fly and swim and slither so convincingly that it is easy to forget we are following them panel by panel and page by page rather than watching them in continuous motion.

The jungle through which they move is equally astonishing. Bertolucci uses light and shadow to great effect while also providing the essential details in every panel to highlight the action and set it in a realistic space.

Bertolucci employs the extreme close-up, the sweeping wide shot, and everything in between to vary our experience of the world he’s portraying. He also takes us up high to look down on a scene, or lowers us into the water to look up at the animals.

As the title suggests, Love Volume 1: The Tiger is the first of three such books from these gifted graphic storytellers. The other two—one of which features a fox and the other a lion—are currently only available in European editions. Of course, this is hardly a hindrance if they, like this volume, are largely wordless. Still, one hopes this new American edition is the first of many for the series, such that a wider audience in this country will encounter Brrémaud and Bertolucci’s beautiful work.