In the awarding-winning graphic novel Lost in the Wash, writer John Ira Thomas, who lives in Coralville, and artist Will Grant, an Iowa City native who lives in Minneapolis, have crafted a tale that pays homage to Dungeons & Dragons, horror comics of the past and schlocky, scary movies. The story centers around a water monster living in a laundromat who is threatening the remote mountain town of Isco, Colo. The water monster does wreak havoc, but folks in this town have other things to fear as well. Isco  is populated by the odd and the desperate, each trying to make something of his or her life in a place that provides little in the way of upward mobility.

“I think Lost in the Wash‘s special touch is that the characters are plainly more scared of economic monsters (like Wal-Mart) than regular old monsters,” Thomas wrote in an email. “All great monsters are a way for the characters (and the readers) to map their own fears. People process the threat and the significance of something scary in their own way; we can agree something’s scary, but disagree as to why. That’s how horror can be at once shared and personal.” 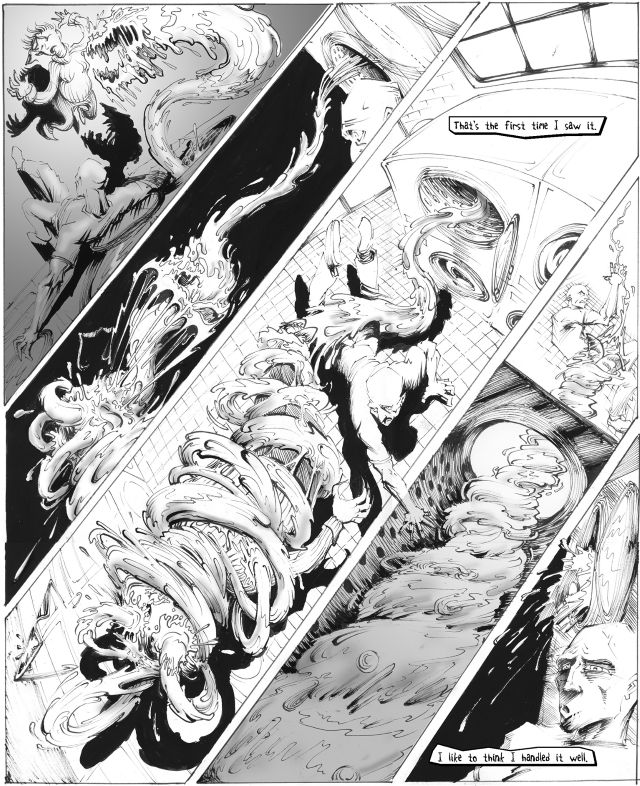 Grant’s art, rendered in black and white, is dense on the page and often requires focused consideration to sort out. That’s no accident.

“By adding a lot of detail to the drawings and unconventional page and panel designs, my goal was to slow the reader down and reward a closer reading of the material—to give them a visual workout, you might say,” Grant wrote in an email. “I also tend to like comics that break away from standard square panel shapes and have a more organic look to them.”

Grant went on to suggest that the style used in Lost in the Wash was also motivated by story considerations. “I thought a free-flowing look to the pages would also fit the book’s exploration of the water element.”

Lost in the Wash‘s focuses on water draws on Thomas’s background in Colorado, and how people in the state view the resource.  “In Colorado, water is on everyone’s mind. Water is political; water is essential.”

Grant was pleased with Thomas’s approach to the scripting because it allowed him a great  deal of artistic freedom.

“[The approach] works well for me because I was able to keep surprising myself in the process of drawing the book,” Grant explained. “It left a lot of room to add little background details, which I enjoy, and compose the scenes without assigning preset page and panel breaks.”

The two creators enjoy an artistic give-and-take that is far different from an artist merely illustrating a writer’s script. “Once the major scenes were written,” Thomas explained, “then the sequence of events was sorted out and I presented Will with a movie-style script. Every comic is written twice—once by the writer and once by the artist. How the two narratives interact and become the story that people end up reading is the special magic of comics collaboration.”

Published by Candle Light Press in Coralville, Lost in the Wash recently garnered a Silver Award in the horror category of the IndieFab Book of the Year Awards from Foreward Reviews. Thomas and Grant decided to enter their work in the horror category rather than the graphic novel category, a decision that Thomas describes as easy to make.

“A good horror book is a good horror book. Why not jump in with the rest? Having a graphic novel category as if it were a genre is like having a ‘Best eBook’ or ‘Best Codex’ category. So we submitted it as just a horror book; when it made the shortlist, we knew that we’d be judged just like any other horror book. I think most people are already at a point where they don’t see graphic novels as a genre.”

Lost in the Wash features two different endings. The “alternate ending”—which suggests the horror is far from over—proves to be the more effective of the two, offering a final shock that is both scary and satisfying. But no matter which ending you prefer, lovers of horror stories that also feature a wry humor will find Lost in the Wash worth a spin(cycle).

Born colorblind and therefore convinced he’d never enjoy graphic forms of storytelling, Rob Cline was first bitten by the comics bug in college. Now Cline seeks out the good and bad across the comics landscape as the Colorblind Comics Critic.