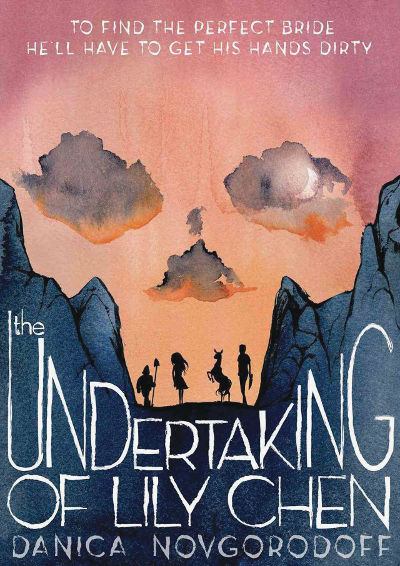 Danica Novgorodoff’s latest graphic novel, The Undertaking of Lily Chen, takes as its jumping-off point an old Chinese practice known as “ghost marriage.” In the opening pages of the book, Novgorodoff includes a snippet from a July 2007 article in The Economist detailing the practice of arranging marriages for men who die unwed. It reads, in part, “A black market has sprung up to supply corpse brides. Marriage brokers—usually respectable folk who find brides for village men—account for most of the middle men. At the bottom of the supply chain come hospital mortuaries, funeral parlors, body snatchers—and now murderers.”

As the story begins, military pilot Deshi Li tussles with his brother Wei, who has illicitly come to see Deshi on base. Wei suddenly dies in an accident, and Deshi runs, finding his way home.

We learn that Wei is the favored son, and Deshi’s devastated parents insist that he find his brother a corpse bride so that he will not be alone in the afterlife.

On his gruesome quest, Deshi soon encounters Lily Chen, a young woman from an impoverished rural home with big dreams of improving her life in the city. Lily is determined, resourceful and hopeful—all traits Deshi seems to lack. While Deshi wears a drab gray shirt, Lily is garbed in a bright yellow dress, which highlights her role in the story as a symbol of hope and new beginnings.

Lily implores Deshi to take her with him so that she may escape a marriage she doesn’t desire (though she knows it would help her family out of some dire financial straits). She sees Deshi as a solution to her problems. More menacingly, Deshi sees Lily as a potential solution to his problem. Can he bring himself to kill her and make her his brother’s posthumous bride?

Novgorodoff shows us Deshi’s resolve as it ebbs and flows. Steeliness comes into his eyes, only to be replaced by doubt or more tender feelings. The intentions of his mind and his heart are at war—as are his loyalties. He desires to please his parents and atone for his brother’s death; he also finds himself falling for Lily even as he considers murdering her.

The center of the story is the tension between superstition, spirituality and everyday experience. Several memorable scenes highlight this tension. Lily and Deshi take advice from sketchy fortune tellers (who have something to tell Lily about her love life), have an encounter with some monks under the influence of drink or drugs and look for signs in their dreams. Novgorodoff depicts these scenes in hauntingly beautiful paintings. She devotes whole pages to ghostly faces, letting the rest of her world fall away.

Novgorodoff doesn’t confine herself to realistic physical portrayals of her characters. She exaggerates or downplays features for effect and seems largely unconcerned with conventional proportion. Her landscapes, in contrast, while sometimes portrayed impressionistically, can also be lushly detailed and rich in color. The overall effect is a space both familiar and slightly strange—highlighting again the tension between belief and evidence, as well as between tradition and contemporary attitudes.

Novgorodoff excels at dialogue. Lily and Deshi’s conversations—in which she rambles on excitedly while he attempts to remain closemouthed—are perfectly rendered. You can hear them speaking to one another.

The scene featuring the two fortune tellers—part comedy, part foreshadowing and part thematic development—is particularly delightful as Deshi and Lily bicker, and the pair of fortunetellers haggle, gaze into the future and drop the dialogue’s mystical tone for a more streetwise voice. Throughout the book, Novgorodoff doesn’t attempt to recreate or suggest Chinese speech patterns: The characters speak like contemporary Americans, and we are left to imagine their native tongue.

In the end, Deshi finally takes decisive action, but it is Lily who eventually devises a plan to resolve everyone’s problems. It’s a predictable solution, but Novgorodoff carries it off well, including a final confrontation between Deshi and Lily’s father, a character who has largely been used for comic relief throughout the book but is treated with great sympathy in the closing chapters.

The story cycles through a number of tones ranging from the purely comedic to the dark and troubling. Novgorodoff renders each scene skillfully and can also blend tones—both in her watercolors and in her text—to add layers to a situation.

With its lovely art and engaging story, The Undertaking of Lily Chen is highly recommended.