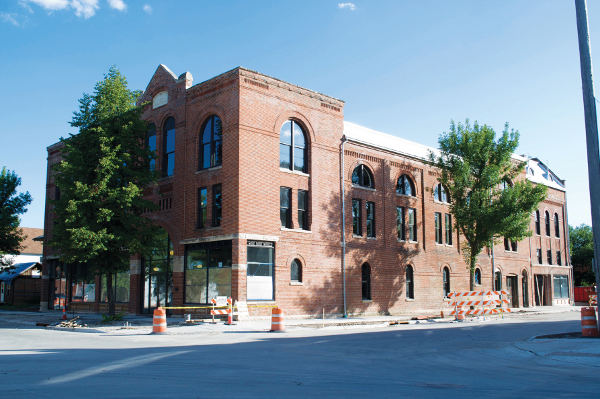 The history of Cedar Rapids’ CSPS building is a palimpsest of changing identities in and around Cedar Rapids’ Czech Village. Over the past 120 years, since the Cesko-Slovensky Podporujici Spolek (Czechlo-Slovak Protective Society) first opened its doors in the 1890s, it has housed a fire station and various industrial businesses. Most recently, it has been home to the nonprofit Legion Arts, which has used the space for more than 1,500 theatrical and musical productions and over 250 art shows since it opened in 1990. Having fundraised to the tune of $8 million, Legion Arts spent the last 16 months giving the building a facelift. The organization is now ready to unveil and celebrate its renovated building with a full lineup of noteworthy visual and performing arts events. 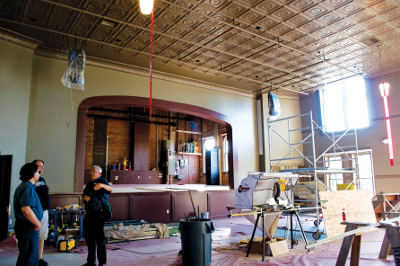 CSPS is on Third Street SE in Cedar Rapids. This neighborhood, now known as ‘New Bohemia’, was heavily damaged by the flood of 2008. Many buildings in the neighborhood are half-demolished, boarded up, or undergoing renovation. When our intrepid photographer Adrianne Behning and I visited, the loudest sound to be heard was the buzzing of cicadas. But New Bohemia is beginning to show signs of life. On the corner of 12th Street, there are the Parlor City Pub, Capone’s Restaurant and the Chrome Horse Saloon, making the neighborhood a livelier nighttime destination than moribund Downtown Cedar Rapids a mile to the north. With the renovation of the CSPS building, New Bohemia is becoming a new alternative cultural hub for Cedar Rapids.

Mel Andringa, co-founder and producing director of Legion Arts, gave us a tour of the building, still under construction, in advance of the August 26th grand re-opening.

He said Legion Arts began as a theatrical performance company, first in New York City and then for 10 years in Iowa City during the 1980s. According to Andringa, he and his partner John Herbert–co-founders of Legion Arts–moved the company up I-380 because they were “looking for a rehearsal space and studio space and … there wasn’t really that sort of space in Iowa City.” 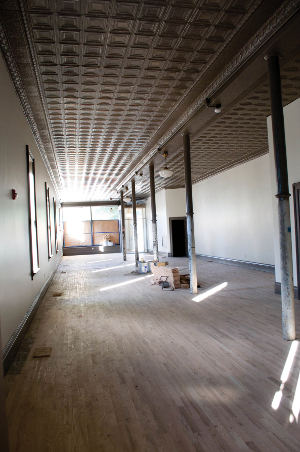 More than twenty years later, Legion Arts is firmly rooted in its current location, carrying its torch into the future with renovations that are careful to preserve the neighborhood’s history as well: “A big part of this project involves state and federal historic tax credits so everything was done to the standards, especially on the exteriors of the State Historical Society and the National Park Service,” Andringa told us as we explored the building.

The first floor, which previously was a printing shop, has been refurbished with office space that will serve as an incubator for arts organizations. Also on the first floor is a black box theatre and gallery space.

The historical preservation is most evident on the second floor, which is dominated by the main stage theatre. The sloped stage and proscenium arch look much the same as they did a century ago and the lounge next door contains the original bar that serviced the various Czecho-Slovak lodges that used CSPS for meetings.

The glass-brick windows have been replaced with regular windows consistent in style with the 1890s, though they’re glazed with modern, energy-efficient glass. If you have been to CSPS shows in the past, the new windows will make a remarkable difference; they let in much more light during the day and open the building up to the surrounding neighborhood.

The third floor houses the Legion Arts offices on the south side, but the Lodge room on the north side is unique. It was home to the monthly meetings of several Czech lodges. You enter through a sturdy door with a peephole, where lodge members had to give a password to be admitted. It is a large room with beautiful wood floors on the north-east corner of the building, with a surprising array of eight closets on the east wall. Each lodge had their secret ceremonies and needed a place to lock up their gear, hence the closets, which also dramatically line a small adjoining hallway. 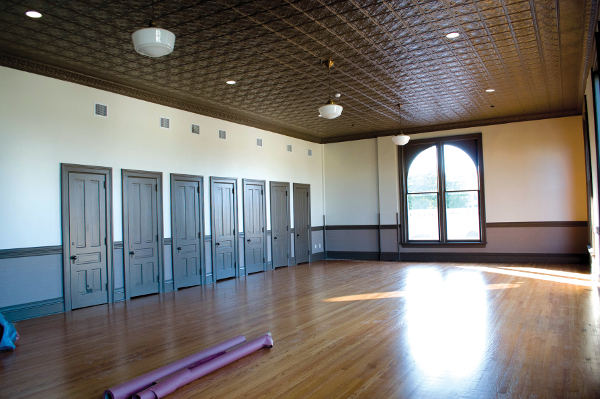 With the new make-over, CSPS has been retooled for Legion Arts’ mission of fostering local arts–this month, the Iowa Arts Council will use the space to present its “No More Starving Artists” conference, featuring workshops in how to actually make a living as an artist–and bringing an interesting and varied line-up of performances and gallery shows to Cedar Rapids. 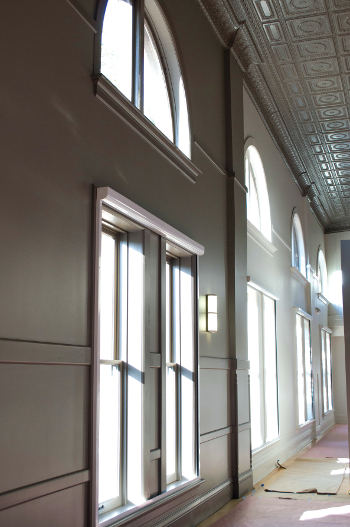 It’s remarkable and worth celebrating that Legion Arts and CSPS exist at all. The organization has persisted and thrived–I imagine to varying degrees–for 20-plus years due to the hard work of its founders and many employees, volunteers and donors. They were able to raise eight million dollars in grants and donations to buy and renovate the CSPS building and surrounding property and turn it into a state-of-the-art gallery and performance space. They have created a unique, adventurous and professionally-managed arts organization in a city that most Iowans associate more with the overpowering smell of cooking oats than the arts. As much work and stress as must come with such territory, I hope they are spending a few minutes this month celebrating all they have achieved.