For the uninitiated, which I assume is none of you, The Mill is, according to a tweet from Menomena, “the most fun [you will have in a restaurant] in years, if not decades! great place, great peeps.” The “great peeps” during my Friday lunch at noon were just me and the waitress. She did not introduce herself, but since I had, over the last week, been engaged in a form of nostalgic self-immolation and listening to “House on Pooh Corner” by Loggins and Messina, I’ll just call her Jim Messina. She was pretty, and was one of the faces I had seen around but never met. 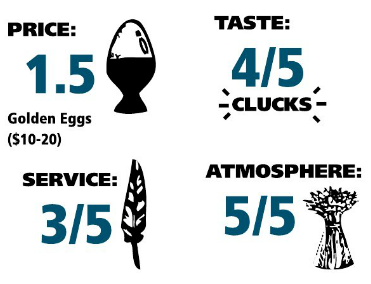 Recently, The Mill has been feeling a little bit more like a restaurant. Their menus are less clunky and more streamlined. The old menu at The Mill listed “imagination” as an ingredient in their Egg Special sandwich. I liked that about the old menu. As much as it might sound like a lie, I had this distant hope that eating the Egg Special sandwich would reignite an old imaginary flame—the romance between me and the world I inhabit. Maybe the sun would seem a little bit brighter. Maybe my office job would take on a new beauty. Maybe I would leave feeling somehow different than when I came in.

Thankfully, other aspects of the menu seemed to have gained imagination. They have an extensive selection of local, craft beers. Their daily specials vacillate between inspired takes on greasy bar staples and the wholly unexpected: weekly farmers’ market specials being the prime example. One night, they offered a pasta primavera, complete with different varieties of squash, brussels sprouts and peppers—and a little imagination: the option of lamb sausage. Another time a roasted bell pepper was stuffed with rice, beans and beef and served with a salad of corn and local bacon.

On that Friday, however, the egg sandwich was the sole reason I had decided to go to The Mill, but I ran into dastardly change. My nostalgia, my illness, would not find its resolution in food. Most of my time at The Mill resides in the haze of early-20s post-college self-congratulation; after a good meal, in a dimmed backroom where the band seems like they’ll never quit, everything becomes unbearably hip. It was the intoxication of youth or one hell of a party, and I would leave feeling alive, bolstered, drunk laughing and insane.

“Water,” I said to Jim Messina because whiskey for lunch on a work day is not a smart idea. I looked over the menu: The Egg Special sandwich was missing its most enticing ingredient, but its presence on the menu was inexplicably magnetic. A good egg sandwich is, at its core, simple. No imagination, a big mush: bread, spread, egg, cheese. The simplicity is necessary because its components appeal to a basic part of our palate. Carbs, fat, protein, salt. There is no acidity to cut through (unless you add hot sauce) which is why it tastes so rich and dense. The Mill adds mushrooms which just contribute to the mush in the best way possible, but a slice of red onion gives at least one flavor to rise out of the fat-protein pile. Adding garlic gives the tongue its sugar fix, too, but it doesn’t overwhelm because there isn’t anything to overwhelm. And while my larger abstract hopes for the sandwich failed, at least I left feeling satisfied.