According to smithsonianmag.com, one of the first groups on record to have introduced traditional Mexican cuisine in America were the Chili Queens of San Antonio. Around the turn of the 20th Century, this group of female street-vendors created impromptu festivals featuring music and dance in the city’s plazas, and it was here that they sold their spicy hot chili con carne, enchiladas and tacos to the public.

These Chili Queens obviously knew better than anyone that there’s just something about Mexican food that screams “party.”

El Banditos is a Northside restaurant that is capturing authentic fiesta flavor in their inventive, fresh cuisine. Holding its own in a growing pool of quality Mexican joints (La Michoacana on Hwy 1, along with new-ish arrivals to downtown Cactus and Mami’s Authentic), El Banditos is affordable, laid back and fun.

Our party of two was seated on a recent evening near the back of the sunny, open dining space. Rather than ordering my usual shrimp taco, lamb taco and calabacitas combo, I opted for adventure. From the “Specials” menu, I chose the Patacón de Congrejo, a blend of blue crab, black beans, mango salsa, crema and basically the kitchen sink of Mexican condiments served atop two fried plantain tostadas. Normally I would avoid a menu item with so many ingredients, but “Adventure! Fiesta!” I said, and ordered my first margarita.

My dinner date (okay, it was my Mom) and I shared a small guacamole to kick off the night. While I think that El Banditos has the best guac in town, I was a bit thrown off by the miniscule portion-size of this particular order. Our tiny portion of delicious guac left us hungry for more … but perhaps that was the point. At any rate, it’s worth noting that El Banditos now offers two sizes of their guacamole, so if you are worried, you can always opt for the larger portion. 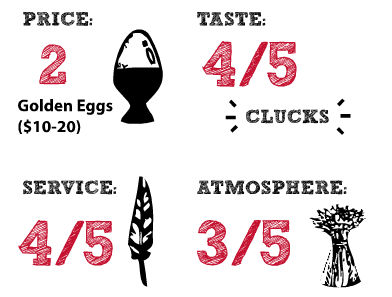 Soon we were feeling celebratory again when our colorful main courses arrived after a very short wait time. In spite of the heaped up appearance of my entrée, the taste was fresh and bursting with flavor. Each bite offered something new, a bite of creamy avocado here, a zing of jalapeno there. The dish was wild and bold, and I did not regret giving it a go.

Served alongside the Patacon de Congrejo was a black bean salad that popped with fresh cilantro, corn and tomato, but seemed misplaced considering the crab dish also contained black beans. My rule is: One bean dish per meal. It’s a rule I just made up, but I think it’s a keeper.

Calabacitas were also presented as a side, and all I can ever wonder when I eat this dish is “How does El Banditos make a runt-of-the-litter food like zucchini taste so freakin’ good?” Maybe it’s a whole lot of butter, or maybe it’s the little leafy spice peppered throughout (oregano?). Whatever it is, as long as they NEVER TAKE THIS ITEM OFF THE MENU, I’m content to let the mystery be.

No Chicken Little dining experience would be complete without something sweet. Since my favorite flan was not on the menu, we opted for a slice of Tres Leches cake for dessert instead. Tres Leches is a vanilla cake made with three kinds(!) of milk: sweetened condensed milk, evaporated milk and heavy cream. The cake is soaked in a milk mixture overnight, then frosted with whipped cream. Do I need to say anything else about it really? How could this not be fabulous? It would be even better with coffee, which we forgot to order. Consider our failure your lesson learned.

El Banditos has become Iowa City’s go-to place for fiery, flavorful Mexican. The service is friendly and prompt, and the atmosphere is casual, yet charming. If you’ve yet to try it, it’s high time you get this party started.