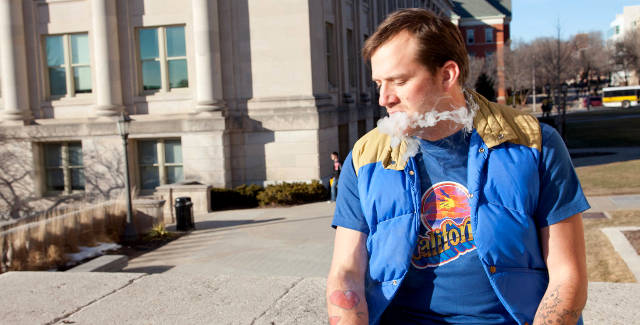 Hip hop artist and former IC resident Coolzey is stopping in for a show at Gabe’s tonight at 10 p.m., backed by openers Fooch the MC, Romulan and Animosity of the Uniphonics. According to Coolzey himself, this could be your only chance to see him in Iowa City for the next year, so don’t miss it, alright?

Coolzey, aka Zachary Lint, was a fixture in the Eastern Iowa music scene for years before moving to Los Angeles a few years ago. Founder of the excellent label Public School Records (which put out albums by Iowa City mainstays Lipstick Homicide and Miracles of God, among others) Lint was, above all, a crazy prolific musician. His work as Coolzey has yielded nearly a dozen releases, all of which are available on his bandcamp page).

In a review for the latest Coolzey album, Hit Factory, Little Village‘s Kent Williams explains, “He has so many verses under his belt between all his various guises over the past 15 odd years that he must dream in rhymed lines; it shows on this record with an unselfconscious hyperactive fluency, as though having a half-sung, half-chanted conversation with his audience is as natural as breathing.”

Lint took the time to answer a few questions about what he’s been up to.

Little Village: How has the current tour been? I understand you were on tour with Louis Logic for the first leg?

Zachary Lint: I have been on tour for two weeks with Louis Logic. 13 shows in 14 days. It’s been wonderful. We became great friends and are planning to do it again in July in New England and Canada.

We get along very well for many reasons, but one of them is that we are both trying to push hip hop into new directions so it can evolve and not die a stubborn death clinging onto the past. Also we both incorporate live instruments and singing into our sets

What’s LA been like? How does it compare to Iowa City?

I love Los Angeles. There are far more opportunities there for artists in any field than in the Midwest, and because the weather is nice all year round, you can work all year round, whereas elsewhere in the US you end up having to deal with straight up survival for at least 3 months a year, in some places more. Iowa is rough because you are basically useless in the summer when it’s too hot that you can’t move and you can’t go outside or you’ll be eaten alive by bugs, and in the winter you can’t leave your house or you might freeze to death or be involved in a car accident and you go into total survival mode. Or at least I did.

Every time I’ve seen you play, your set has been pretty varied — with punk and hip-hop sections. What could an audience expect from tonight’s show?

[The show] will be a typically structured Coolzey set: New and old songs, mostly hip hop but with some punk, rock, pop, and show tunes sprinkled in.

Considering you’ve been in LA for a bit, have you had any interaction with Stones Throw or any of their artists?