Writers of the Depths Anthology 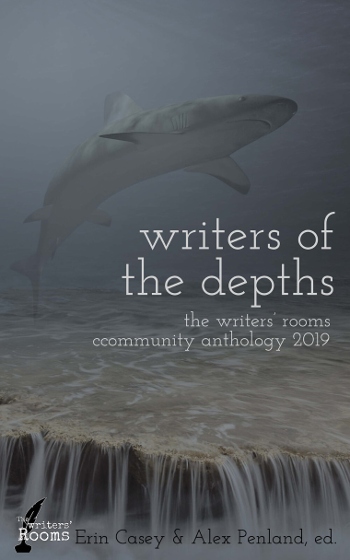 Like a river flowing into the sea, Writers of the Depths, the anthology from the Iowa City–Cedar Rapids workshop collective the Writers’ Rooms, injects a fresh perspective into ocean tales. One traditional story and six fantasy tales are studded with poems like pearls among the prose. These pieces do not shy away from complex contemporary issues, and more than surface-level themes underpin enjoyable reads.

Maxwell Love’s evocative haiku, “Clutching the Wheel Through a Storm,” opens the anthology. On its heels is Amelia Kibbie’s “The Pearl,” a present-day yarn in which the emotional pain of living in an often-hostile, high-stress world is figuratively — sometimes literally — transformed into hope.

Emma Jean Meyer’s “Maelstrom: A Full Transcription of the Soul Abandoning Ship” is a classic “be careful what you wish for” tale about a girl who loves the sea, though the ending spins in an unusual direction. It is followed by Linda Muller’s poem, “Into the Past,” which contains lovely imagery about the flow of memory.

“The Horror at the Beach” by Ross T. Byers is a delightful romp. The author deftly depicts a small slice of time in the lives of monster hunters. By showing only a piece of the narrative’s context, the author conveys a sense of a larger world outside the story.

“Out of Reach,” by Ellen Rozek, is the one piece that has no fantasy elements; it is a more straightforward narrative of a sailor who finds a woman stowed away aboard his ship. The realistic danger of the situation keeps the reader wondering how it will resolve. It is followed by G.Z. Chapman’s poem “By Surf and Stone,” a beautiful piece about drowned sailors.

R.C. Davis’ “Deepwater Metamorphosis” is another monster hunter story, but very different from Byers’ tale. After an invasion of terrible creatures from the sea, a fraction of remaining humans fight for survival in what seems to be a losing battle. The hopelessness of constant loss is a major theme as the main character traces his history — but perhaps there is hope after all.

“The Reclamation” by Laurie M. Penland turns the idea of human supremacy over the sea on its head, creating a scenario that is both ironic and poetically just. In a world where humans have pillaged the ocean, what happens when the sea fights back?

“Silver and Syrup,” by J.E. Brooke, is set in a world different from our own. Sea people, forced into poverty, eke out a parched existence on the shore. But when two girls go hunting for treasure, their search is interrupted by a fight for survival. The last piece in the book is a poem by Casey Vox, “Under-See.” The metaphorical ocean imagery in this poem resonates in the mind long after the book is closed.

Ocean yarns are as old as humanity and echo down throughout the ages of storytelling. This anthology adds new material to the long chronicle of sea tales, and though short, it will delight those who love to read about the ocean.

This article was originally published in Little Village issue 275.