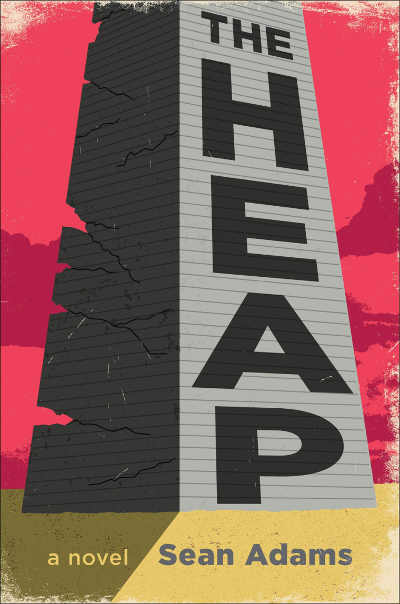 In his first novel, Iowa Writers’ Workshop graduate Sean Adams masterfully satirizes bureaucracy, capitalism and hustle culture in a way that is humorous and disturbing, while constructing an intriguing narrative that deals with the mystery of human connection.

Before it all came tumbling down, Los Verticalés was a 500-story self-contained architectural curiosity equipped with nearly everything needed for a burgeoning metropolis. “The Vert,” as it was called, was a “city that grew up rather than out, defying directional norms until the day it could no longer hold.”

The collapse of the Vert led to countless deaths and wreckage scattering across 20 acres of desert. The lone survivor, 103.1 WVRT radio personality Bernard Anders, is trapped at his soundboard in an underground studio that hasn’t completely caved in. Surviving on water trickling out of a wall and a diet of rats, he continues broadcasting over the airwaves.

Ratings soar as listeners tune in to hear about life on the inside. One of those loyal listeners is his estranged brother Orville, who hopes to reconnect with Bernard and joins the colossal “Dig” effort, where valuables are to be retrieved to finance a monument dedicated to the Vert’s memory. The only way Orville can talk to his brother is by calling into the radio program through a phone bank.

Guilt-ridden about his lack of connection to Bernard, Orville hopes to rescue his brother — but complications arise. He is surrounded by characters who, nearly without exception, are shameless opportunists with hidden (and sometimes not-so-hidden) agendas. During his quest, he uncovers layers of deceit to unearth strange and dark secrets buried beneath the tragedy as well as those trying to exploit it.

Orville soon learns “there are greater forces at work,” as he finds himself entangled in a web of conspiracy and intrigue when a media company tries to profit off his brother’s predicament. He also encounters an outfit known as the Vocalist Cartel, “voice actors without morals” who are “willing to do anything for a price.”

The narrative is threaded with selections from a collective memoir by Vert residents who were away during the collapse, titled The Later Years. These excerpts reveal the bizarre inner workings of this social and financial experiment.

Along with gaining a sense of the massive scope and structural wonder of the Vert, readers are allowed rare inside views into the world within its walls: the class divisions between those in the inner units (the “windowless”) and those with wealth in the outer units (the “windowed”), the unexpected consequences from expansion and shady dealings on every corner.

An inventive blend of hilarity, tragedy and tenderness, Adams’ satiric vision presents a world obsessed with the myth of infinite growth and egos attempting in vain to reach such heights, where hope for humanity survives when people search for truth beyond the deceptive dimensions that keep such dangerous illusions intact.

The Heap is a debut definitely worth discovering, and it’s worth encouraging others to “Join the Dig!”

This article was originally published in Little Village issue 278.