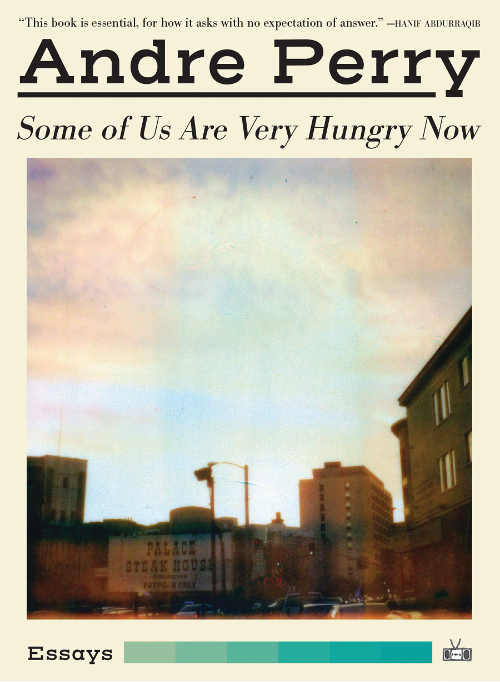 The memoiristic essays in Andre Perry’s Some of Us Are Very Hungry Now (2019, Two Dollar Radio) reconstruct — from journal entries, memory and fictionalized correspondence and dialogue — Perry’s youthful encounters with American music, women, culture and racism-loaded language. Most accounts are positioned in three geographic locations: San Francisco, Hong Kong and Iowa City: cities in which the author, as a young man, sought out opportunities for professional development and whatever life experiences that might come his way. He played in a rock band, composed music, wrote music criticism and, finally, back in the Midwest, entered a graduate writing program.

Shocked along the way by what had been the naivete of his early college days, Perry meandered through sex clubs, Cantopop performances, house parties and intimate relationships. Although the descriptions of these encounters only allude to the graphic, the unattuned reader could find some narratives disquieting.

The literary elements of the book are gathered in a basket of honest, direct and unadorned prose. The text is backlit by poignant sentiments — a black man’s feeling of otherness and brokenness and that very human, universal sense of being lost and “invisible” in our own world.

The visage of James Baldwin and the ghosts of his essays, such as “Notes of a Native Son” (1955) and “The Fire Next Time” (1963), seem to shadow the pages as probable and logical sources of literary inspiration. Consequently, the tone feels intermittently bitter, perhaps because at the heart of Hungry Now is the nagging suggestion of despair with recurrent expressions of racism. The author pushes this issue to the fore, from the opening pages where, as a 10-year-old boy, he is bullied and name-called on a playground, to near the book’s end, in an after-hours scene in The Mill where he separates a fight over a clueless racial indignation.

But Hungry Now is also subtly melancholic. This gray mist is well expressed by Perry’s beautiful and sensitive rendering of the inevitable demise of his relationship with Miranda, both in the fractured structure of the text and the diction. The essence of a work like this would be lost if it were anything other than unapologetic, unremorseful. The author counterbalances this tone and unifies the text with riffs of musical reference, from Lou Reed and the Velvet Underground to Mobb Deep to Kendrick Lamar, inviting the reader to recall and identify with the music and lyrics of the evolving, though persistently troubling, times.

Written from today’s more mature vantage point, Hungry Now reads like a retrospective in self-discovery, a final gesture that extends the author’s coming-of-age experience, a nod to finally coming to terms with selfhood. The essays insightfully relate what it meant to be a relatively privileged, yet undeniably still challenged, young black man in early 21st century America. Perry’s recollections will linger in our collective and personal consciences, serving as a call to consider our perceptions of blackness in American culture.