The City of Iowa City released its August 2014 bar check report earlier this month, breaking down where police in Iowa City are stopping, and how often.

The report incorporates stops by both the Iowa City police department and University of Iowa police, with sections delineating the number of times officers stopped at a particular location, the number of “Under 21” citations issued, as well as the number of PAULA citations (possession of alcohol under the legal age) issued.

The data encompasses August 2014, which receives its own section (as per the monthly report), as well as the preceding 12 months.

So, what are some of the takeaways? For one, most of the citations are being issued within a relatively small amount of bars. In fact, roughly 78 percent of PAULA citations issued over the last 12 months came from just four downtown bars: The Summit, Union Bar, Sports Column and Brothers Bar and Grill.

By including The Airliner and DC’s, that number jumps to roughly 91 percent. 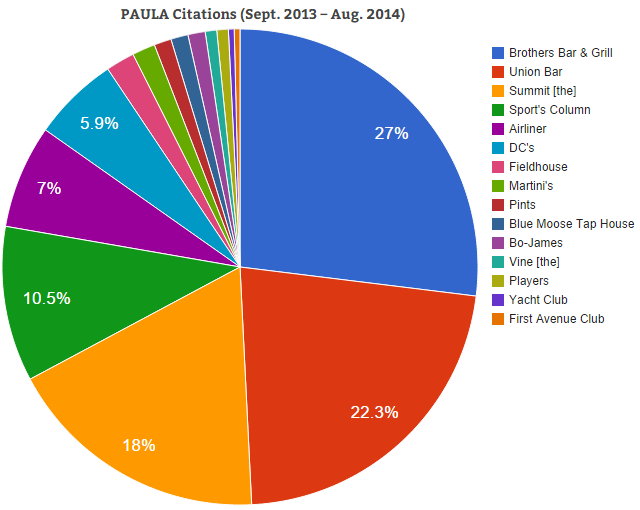 It’s more likely that both of these factors feed into one another, and despite the chicken and egg scenario, one thing is clear: Police in Iowa city see these bars as potential ‘trouble spots’ when it comes to underage drinking, and given the number of citations being issued in these establishments, they’re not wrong. 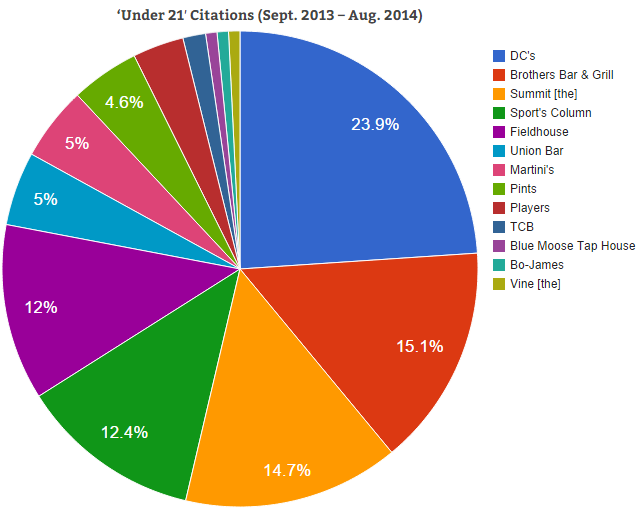 The issue isn’t quite that simple, however. Police are quick to point out that a higher rate of bar checks doesn’t necessarily mean they see that business as being problematic.

“A lot of it, despite the myth, is not necessarily writing tickets,” said ICPD Sergeant Scott Gaarde. “A lot of [bar checks] are for educational purposes … basically, getting the word out about what expectations are, so to speak.”

Gaarde adds that some bars have higher call-for-service ratios because, quite simply, they service much larger crowds. Indeed, with an allowed occupancy of more than 550, Brothers Bar and Grill is able to host far more patrons than the vast majority of bars in downtown Iowa City. Pints and Martinis, by comparison, sit at 180 and 200, respectively. Union Bar and the Summit, meanwhile, are are able to host a whopping 850 and 730 patrons, respectively — dwarfing all other bars in the area.

A bar’s maximum occupancy is just one factor that can skew bar check and citations rates, of course. The Blue Moose Tap House, which has a maximum occupancy similar to that of Brothers Bar and Grill, saw just three PAULA citations over the reported 12 month period (Aug. 2013 – July 2014). Over that same time period, meanwhile, police issued 69 PAULA citations at Brothers Bar and Grill, and stopped by far more often (290 check-ups, as compared to 78 for the Blue Moose Tap House).

In the Ped Mall, the bar DC’s is cramped by comparison (120 maximum occupancy), yet police stop by very often relative to other downtown bars. Over the reported 12 month period, DC’s is the second-most visited bar in Iowa City as it pertains to law enforcement, with 235 total bar checks. Clearly, a bar’s size is just one piece of the puzzle.