Street art. Just by reading that, perhaps you’ve been marginalized. Perhaps you’ve been freed. It’s a provocative rabbit hole of self-generating “what is art?” questions that’s easy to tumble down. Recently, on a cold, rainy, cracked-gray day, Deanne Wortman was my spirit guide on a journey through corridors and alleys, the gallery spaces of our local, hidden-in-plain-sight art world.

“When people see a little white haired lady walking around through the alleys, they get a little worried,” jokes Deanne. She’s lived in Iowa City for nearly 50 years and stumbled into this world years ago while working on a public mural project at what was then the construction site of the new public library. “There was some graffiti getting done secretly overnight. I wanted to know who was doing that because we were, in essence, painting together. One of the friends of the artist said, ‘oh, my friend does this.’ I wanted to meet him, I wanted to talk to him.”

Deanne paints, draws, prints, performs, all with kids and the public. She currently teaches a printmaking class at the university. For her, art is as public as our air, sky and water. “These places and images interest me,” she says, explaining how she has carefully documented them over the years, “they’re below the surface, around the corners, slightly out of sight. A lot of (the pieces) don’t exist anymore, which I think is interesting, and I photograph over the painted walls.”

“Is there a line between street art and graffiti?” I ask her. But maybe the question is the answer to the question: “The city has ordinances. (Street art) is called vandalism. But were cave drawing vandalism? We admire those, but not these. The city did this (showing me a faded sign in the bank drive-through on Linn, between Washington and Iowa) but doesn’t it look like graffiti?” 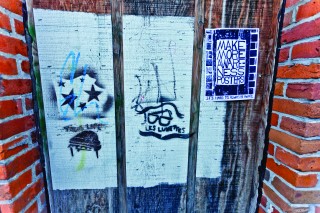 Much of it exists in the long alleys that start at Linn Street and end at Dubuque and Clinton. They are like spinal cords—central, connective, running the length of our bodies with spines leading into nooks and corners that are not unlike smaller rooms in a greater gallery. We’ll call these alleys Spine A (next to the public library and leading to Clinton) and Spine B (starting next to the Yacht Club, stopping in front of Prairie Lights, and starting again next to Which Wich, on Dubuque).

Both alleys run east-west. “Isn’t that interesting? . .  . East and west goes towards and away from the river. I’m sure the river was a focus, geologically,” Deanne describes human life historically seems to spring up around water. On this rainy day an oily residue coats the gallery walls, water cascades off buildings into tight, thin stalactites. “Mission Bleak” adorns Spine A behind Public Space One. There are heads of Simpsons-looking characters. A giant face says NOMA and what is likely a D is covered by a giant face sucking air through a horn-shaped mouth. An entire section of brick up against the Jefferson Building looks like petrified wood frozen in Carbonite. “It’s like when people carved their names in trees!”

Iowa City’s past drifts above us in the form of old building names and washed-away instructions to park or shop. Scribbles, images, forms, shapes; the concrete and abstract; the cartoons and the realistic. “People feel compelled to make marks,” she says. In a participatory twist, the words in fresh-blood red “can’t feel at home / can’t feel at home” have scribbled next to them in black marker “can’t means won’t.” We see Groucho Marx, walking bombs, pieces in French. She stands next to one of her favorites: a gorgeous stenciling of the Creature from the Black Lagoon.

We reach the end of Spine A. The closer you get to the public streets, the less art there is. The front is clear, maintained. “No graffiti out here,” Deanne says, “Except advertising. We’re inundated with media and we think it’s okay,” she says, pointing at Hills Bank on the corner of Clinton and Washington, “but if I wanted to put a picture up there, the answer would be no. But I feel advertising,” she whispers, “is much worse defacement. We talk briefly about how damaging ads can be to the human spirit, she mentions that this is especially bad for young people. “When I work with children,” she states, “I have them make pictures. A sad thing I see is that young kids, elementary kids, have increasingly less ideas of their own. What they make is what they’ve seen on TV or in movies. It’s all taken from someplace else. And that someplace else is commercial America. So I say, ‘no words,’ because they want to write GO HAWKS or  their names. ‘This is a picture-picture.’ You can’t put a picture up there that isn’t YOUR picture.” We see, above Mesa Pizza, giant hands shaking. “I love that,” she says.

“In the 60s, there was a move for alternative spaces,” says Deanne. “Abandoned houses, empty storefronts; these new environments were cutting edge, yet people were painting on walls since humans began! How about Pompeii? Do you think that stuff was in a gallery?” I tell her, laughing, I guess Pompeii is a gallery now.

Exactly, she tells me. Iowa City—shops, banks, gas stations and all—is a gallery in time. 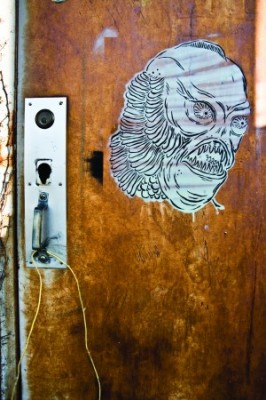 “There is public art. There’s a public art committee. You’ve seen those sculptures downtown in the Pedmall, chosen by a public committee approved by government. The interesting question is what gets chosen. But they pick things that aren’t controversial. And art is controversial. It’s an outdoor-but-indoor gallery where everything is smooth, clean and not controversial. Look at the wonderful variety and amazing skill. It always has been, always will be and should be. It should set us to thinking, make us have discussions!”

There’s a quiet dignity to these daytime backstreets, these corridors festooned with wet garbage, lost cables. And poking gutters in all shades of faded red and brown and silver. “Some of these things are kind of sad. These back alleys can be very ugly and the front side is all yuppie, all maintained. We have an interesting dichotomy about what Iowa City is.”

We enter Spine B at the alley right next to Which Wich. It has a wooden bridge that today ends into a thin stomach-shaped pool fed by a thin pipe of water dribbling down the buildings, dripping from the wires and running all down the gallery walls of the cavernous, narrow alleyway. A box-shaped, thick-dripping critter that says “what” inside its rectangular body. “Reminds me of a Medieval European city full of refuse and garbage and wooden bridges.”

There are some stickers back here, too—gaunt, black-and-white pop art adorning fuzeboxes like mushrooms. “WHO’S 5AM” challenges a sticker with a mysterious hooded figure. A giant orange fly, “a stick-on, one to really cherish,” Deanne says, glows from above a dumpster just beyond the busy one-way street. There are a lot of scrawled names and words in sloppy loops; “I’m not so into scribbled names,” she whispers.

There’s a commissioned mural on the side of Studio 13. “That’s my guess, anyway,” she says, “because there’s no way you could paint something like this without getting caught.”

She shows me an image on the third floor of the parking ramp by the Old Capital Mall, “Getting mighty close to the cops! It’s right by the door on the west end of the ramp. It looks like a pumpkin, maybe a bomb, maybe both! I thought, that’s kind of cool! It’s a really public place.”

“The space is absolutely as important the image,” she continues. “It would be interesting to see how many of these artists exhibit in galleries. It would be a different thing and the public would approach it differently. If I take them down the alley and show them where the art is done, they’d have a completely different approach. Are they ‘art’ when they’re pictures in a gallery but not here, where they were made? It’s an interesting question.”

For Deanne and others who see art and controversy as closely intertwined, it’s all about the questions.

“This is a public, open gallery!” Deanne exclaims, sensing the interview coming to a close, “Walk the alley gallery on your own! No admission, no charges, no cost, no walls, no restrictions…art for people!”

Russell Jaffe is filling in for R.A.D. Wudnaughton, who has become stricken with image poisoning after encountering some particularly evocative visuals.