The Untitled Bombsite Project, a video projection by Jill Baker and Jonathan Rattner, was the centerpiece of Public Space One’s final exhibition in its Jefferson Building space. The project included drawings and sculptural elements placed within the gallery that related to thematic elements in the video. Touted as an “experimental documentary,” the film took up the task of relating the story behind a site in Southeast Oregon that was bombed by a Japanese plane in 1942. In the construction of the project, Baker and Rattner utilized the words of the pilot, residents and—most importantly—a visual landscape of the site itself.

The human story behind the events occupies about half of the screen time in the documentary: Nobou Fujita, a pilot in the Japanese navy, got the idea to use his reconnaissance plane to drop bombs on American targets. He presented his idea to superior officers, hoping for an assignment to bomb an important target in Los Angeles or another major coastal city. Instead, he received orders to bomb a forest in Oregon. 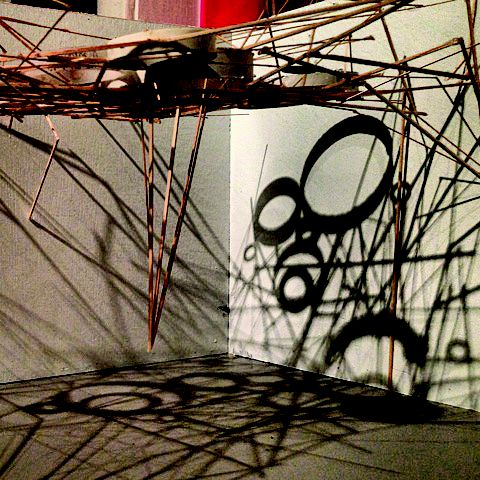 No Shirt, No Shoes, No Service

Chávez repurposes found materials into whimsical and disquieting structures. His installation in the Figge, which opened June 28, uses materials reclaimed from the Quad Cities area integrated into a net or web-like structure, fundamental in human and animal habitats. The materials of the work, here, have as much to say as the structure, and the inflection they give to the final product should be worth a look. 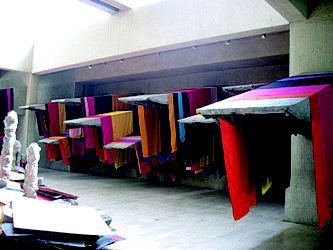 This exhibition is touted as a kind of boxing match between Phyllida Barlow’s anti-minimalist aesthetic and I. M. Pei’s brutalist architecture. Works from the collection will situate Barlow’s work with three other women whose work stands well outside of the clean-edged minimalism favored by Donald Judd and Sol LeWitt: Magdalena Abakanawicz, Louise Bourgeois and Lee Bontecou–among others. It promises to be an engaging show.

I imagine that his commanding officers thought the bombing would be more fearsome if used to ignite a large forest fire than to hit a well-guarded target with relatively little firepower. In any event, his plane, which was stored atop a submarine, was catapulted into the air just off the coast of Oregon, flew to the designated spot, dropped the bomb and returned to a rendezvous point to meet the submarine and escape. Weather postponed the mission several days, and when he finally flew, the landscape was wet enough that the bomb destroyed a single tree, catching nothing else on fire.

Terror on the west coast did not ensue. But after the war, citizens of Brookings, Oregon, invited Fujita to the local Azalea Festival, which began an unlikely relationship between the pilot and the town. Fujita visited Brookings several times. He gave the city his family samurai sword as a token of peace, and after his death his daughter returned to plant a new tree at the bombsite.

All of these events were related by the documentary through the accounts of locals and in Fujita’s own words, typewritten and set before the camera. But the events and the people were not the “lead characters” in the documentary. Two quite distinct and abstract characters shape the nature of the film: time and place.

Time and place are obviously crucial narrative forces without which a story could not be a story. But the question at the center of this film seems to have been about how to allow these forces to become characters, how to let these elements tell their side of the story, too.

The film seems to ask questions such as, What is the sound of time passing? and What does the volition of a landscape look like? It explores the passage of time in the forest and the landscape of memory. It seeks to understand and express the nature of a landscape that defended itself and brought a man and a town together. The forest played its own role as a peacemaker, and the film-makers allowed it to have, as it were, its day in the sun.

Cut between the more narrative elements of the film are shots depicting the landscape around the bombsite—a landscape personified, in a way, by a slug slowly edging its way toward the right-hand frame of the video. It is a wet landscape with enormous trees. Shadows and an occasional view of the film-makers reveal their presence in the landscape. It is still there now, 70 years after the bomb fell. And all that water, all that lush, green life make very clear why the fire did not spread.

It is a view that the Japanese generals, importantly, did not have. Relying on reconnaissance photos and what few reports they had, they knew that they were sending Fujita to bomb a forest. But they did not know this forest: They had no sense of the life there; they did not know that the forest itself would defeat their plans.

Also cut into the spaces between narrative moments were images of the sea against a cloudy sky and a more abstract image of grayish horizontal lines traversing an off-white screen. These abstract sequences are set against the particulars of the narrative and invite a more contemplative relation to the story and the time and place in which it occurs. The recounting of this particular time gives rise to an exploration of the nature of time, and the story of this particular place invites a consideration of the nature of space.

The sound in the film is largely amplified white noise, and this was how I read the abstract sequences as well—until, near the end of the film, they were revealed as images of microfilm dashing across the screen of a microfiche reader. This was a representation of passing time. The moment of recognition re-cast these transitions in my memory of the film. I find them to be successful because the visual pause they created within the space of the documentary opened up a rhythm of waiting and thinking that fits so naturally with the process of recalling past events—of pulling events out of time past and making them present, of creating a space for (and from) memory.

In its attempts to make visible these two very abstract ideas—space and time (the two structuring principles of all experience, in Kant’s view)—the Untitled Bombsite Project digs into an engaging historical narrative to make visible what are often unseen and unconsidered forces shaping our perception of the world.